In the past few years, cooling off with a hard seltzer on a hot summer day has become increasingly popular. While the two biggest players in the market, White Claw and Truly, enjoy the lion’s share of the market, many other companies are looking to capitalize in the hard seltzer market. And, as the Summer of 2020 begins to heat up, so does the trademark battle between two of these companies: Future Proof Brands, LLC (“Future Proof”) and Molson Coors.1

The Products and the Marks

On September 1, 2019, Future Proof launched “Brizzy,” a seltzer cocktail offering consumers a refreshing alcoholic beverage with only 100 calories, 2 carbs, 1 gram of sugar and 5% alcohol by volume. Brizzy flavors include Watermelon Mule, Strawberry Rose, and Mixed Berry Mojito. Future Proof applied to register the Brizzy mark with the USPTO in November 2018. Originating in Austin, Texas, the products can now be found in over 1,000 retail locations in four states with plans to expand into more states this year. 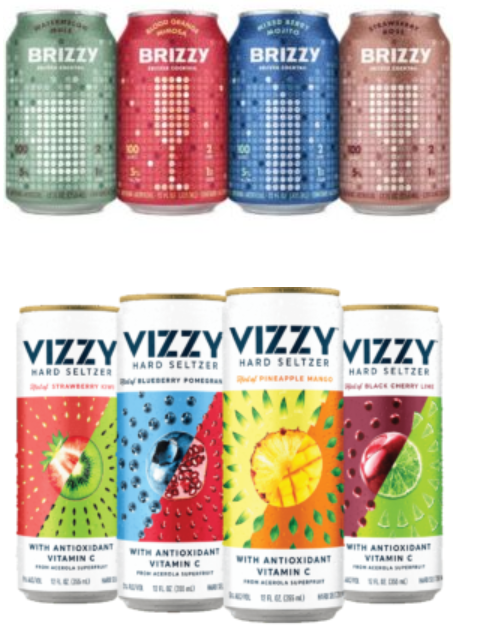 In February 2020, after filing an action for trademark infringement, Future Proof filed a motion seeking a preliminary injunction prohibiting Molson Coors from selling and marketing Vizzy on the grounds that Vizzy was confusingly similar to Brizzy.3 Future Proof sought to enjoin Molson Coors from: (1) advertising or selling alcoholic beverages with Vizzy or any other confusingly similar mark to Brizzy; and (2) using, registering, or applying to register the Vizzy mark or any variation thereof.

However, the court refused to grant the preliminary injunction finding Future Proof did not meet its burden on the first requirement of the Rule 65 standard—namely, that it was likely to succeed on the trademark infringement claim. The court held that Future Proof failed to show it would succeed on the merits of the claim because there was not a likelihood of confusion between the marks – one of the two elements of infringement. The court examined the eight factors for confusion, discussed below, before concluding that, taken as a whole, there was insufficient evidence to demonstrate a likelihood of success on the merits.

The strength of the mark allegedly infringed

While Future Proof asserted that Brizzy was a strong mark, the court disagreed for two reasons. First, relying on precedent, the court reasoned that because the two marks share in the common root word “fizzy,” “which is certainly an adjective that a customer looking for a flavored, alcoholic seltzer product would desire…Plaintiff cannot realistically hope that by obtaining a mark based on and characterized dominantly by one word…it can prevent competitors from doing the same.” Second, the court points out there is a “plethora of competing products humorously close to [Future Proof’s] mark” such as Malibu’s Fizzy, Izzie Beverages, and Bizzy Cold Brew, among others. For these reasons, the court weighed this factor strongly in favor of denying the injunction.

The similarity between the two marks

Here, the court considered the similarity of the two marks by looking at their appearance, sound, and meaning. The court acknowledged that the letter “B” and “V” are easily confused4, but agreed with Molson Coors that the “logos, font, coloring, cans and packing could not be more different.” Since this factor is considered through the lens of how the customer perceives the marks, the court did not believe there was a high likelihood a customer would think the marks are similar, favoring denial of the injunction.

The similarity of the products or services, identity of the retail outlets and purchaser, and the advertising media used

The court considered these elements together and, with relatively minimal discussion, concluded they weigh in favor of granting the injunction.

The evidence of actual consumer confusion

Future Proof offered one instance of actual confusion wherein a wholesaler asked a Future Proof employee to talk about “Vizzy” when referring to the Future Proof product. However, the court drew the distinction that this was not consumer confusion, but wholesaler confusion and added this was a “fleeting mix-up of names.” Again, the court weighed this factor in favor of denying the injunction.

The degree of care exercised by potential purchasers

The court did not spend much time on this factor, stating “given the low cost of the products at issue, this factor provides little or no relevance to the court’s determination.”

On April 20, 2020, Future Proof filed a notice of interlocutory appeal of the court’s denial of the preliminary injunction motion. On June 10, 2020, Future Proof, refusing to let its argument fall flat, filed its 54-page brief opening brief on appeal, raising the overarching question of whether the “trial court erred in applying the factors…for evaluating a likelihood of confusion.”5 Future Proof asserted that Molson Coor’s use of Vizzy is “textbook trademark infringement” and focused its argument on four of the eight confusion factors: strength of the mark; similarity of marks; actual confusion between marks; and consumers’ degree of care and Molson Coor’s intent.

Strength of the Mark

Future Proof argues the trial court erred in finding Brizzy is a “weak” mark because it misapplied precedent by: (1) ignoring the presumption of distinctiveness enjoyed by a trademark holder and; (2) ignoring the tests adopted by the 5th Circuit to assess descriptiveness. Future Proof asserts that “a trademark is presumed to be inherently distinctive where, as here, the PTO registered the mark without requiring evidence of secondary meaning,”6 while also acknowledging this is a rebuttable presumption. Future Proof claims the only evidence Molson Coors has offered is an empty assertion that Brizzy comes from the word fizzy. Future Proof also challenges the court’s descriptiveness analysis, arguing that the court did not consider any of the four applicable tests under 5th Circuit precedent, under which Future Proof asserts its mark is not descriptive.

Similarly, Future Proof asserts the trial court erred in two distinct ways by: (1) focusing on certain visual differences in product packaging instead of the marks; and (2) ignoring the aural similarities between the marks. Future Proof relies on 5th Circuit authority stating the words should be the focus of the analysis, not the product packaging. Further, Future Proof states that the rhyming and audible difficulty in distinguishing between the “V” and “BR” consonants when spoken establishes similarity. Future Proof raises an interesting point in that sound in this case is particularly important as alcoholic beverages are likely to be ordered orally at a restaurant or bar.

Degree of Care and Intent

Future Proof argues that the trial court failed to give due weight to these two factors. Concerning the degree of care consumers use in selecting the products, Future Proof asserted that in the hard seltzer market, with a relatively low price point, consumers are making quick decisions among a “crowded array” of products in fast-paced environments, tilting this factor in its favor. Finally, Future Proof asserted that Molson Coors did have the intent to infringe based on a Molson Coors executive’s awareness of Brizzy before launching its media blitz for Vizzy.

While we await a ruling from the 5th Circuit to determine whether there is a likelihood of confusion between Brizzy and Vizzy, let the arguments of each side percolate and bubble as you come to your own conclusion.