The choice of entity decision is a critical step in every company’s life cycle. At its onset, a business’s owners must decide where the business is going to be formed and what type of business entity it will be.

Business owners and advisors might prefer to incorporate in any one state for different reasons. Businesses are often formed in the jurisdiction in which they are headquartered or operate primarily. Delaware is a popular state of formation because of its mature corporate law and court system. Venture capital and private equity backed companies typically choose to operate as Delaware entities.

After its formation, a business may need or want to change its entity type and/or place of formation. Such need or desire may be caused by changes in ownership, changes in investor demands, changes in tax or corporate laws, or changes in growth and exit strategies, among other business changes.

3. Prior assets or attributes of Resulting Corporation.

5. Resulting Corporation is the only acquiring corporation.

6. Transferor Corporation is the only acquired corporation.

The structure of an F Reorganization can take many shapes. A list of examples is set out in Treas. Reg. § 1.368–2(m)(4). Many of these structures involve mergers among related entities and/or the reincorporation of a business in a new state.[3] In practice, F Reorganizations typically involve S corporations, either as a target entity in an acquisition or as the acquiring entity. The pass-through tax treatment of an S corporation is attractive, but limits on who can be shareholders and being limited to having a single class of stock can create obstacles to retaining pass-through tax treatment for business operations.

One common way of completing an F Reorganization is through the creation of a new corporation, which initially becomes the parent holding company of a new entity that will operate the existing business. The parent holding company then sells part or all of its interest in the new entity. Structuring an F Reorganization in that manner will be the focus of the remainder of this article.

Below is a simplified diagram of the steps involved in completing an F Reorganization with an S corporation.[4]

Individual shareholders own all of the issued and outstanding equity of the existing corporation (“OldCo”). 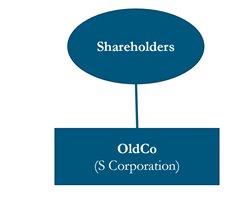 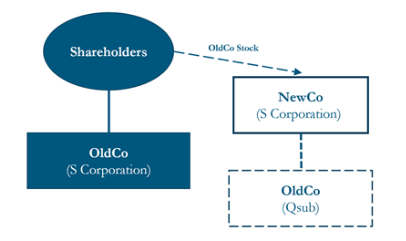 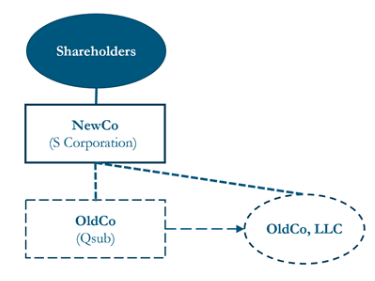 Individual shareholders own all the issued and outstanding equity of NewCo in the same proportion that they owned their equity in OldCo. NewCo is the single member of OldCo, LLC. 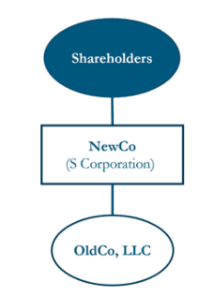 When performing the F Reorganization structure outlined above involving S corporations, one must be mindful of the tax compliance issues and impact on compliance filings moving forward.

The Resulting Corporation (NewCo in the example above), must obtain its own taxpayer ID number (employer identification number (EIN)) by filing a Form SS-4. The Transferor Corporation (OldCo) would retain its historic EIN number after the Qsub election is filed.[5] As a Qsub and later a single-member LLC, unless a special election is made, the entity will be deemed disregarded from its owner for federal income tax purposes. However, there may be certain non-income tax and business reasons why the Transferor Corporation would still need to use its own EIN, such as banking relationships, employment tax filings, and contractual requirements.[6]

Moreover, even if OldCo, LLC’s classification as a disregarded entity changes so that it is recognized as a separate entity for federal tax purposes, OldCo, LLC would continue to utilize its old EIN number that it had prior to having a single owner.[7] In other words, the EIN of the Transferor Corporation will survive despite its conversion to an LLC and even after it becomes classified as a partnership or other entity (as may be the case in an equity rollover transaction).

Also, after Step 2 in the diagram above, it is common, and maybe prudent, for NewCo to file a Qsub election (Form 8869) for OldCo before converting OldCo to an LLC under state law (Step 3). The reason for this sequential timing is that the Qsub election must be made while OldCo is still a corporation and meets the requirements for being a Qsub under I.R.C. § 1361(B)(3)(A) and (B).

This timing issue was analyzed by the IRS in Private Letter Ruling (“PLR”) 201724013. In this situation, the taxpayer had its steps out of order and submitted a Qsub election after the subsidiary corporation had converted to an LLC under state law. The IRS ruled that the election to treat the sub as a Qsub was ineffective because the corporation did not meet all the requirements for a Qsub at the time the election was made and for all periods for which the election was to be effective. Ultimately, the IRS granted the taxpayer relief because the circumstances resulting in the ineffectiveness of the Qsub election were inadvertent within the meaning of I.R.C. § 1362(f).[8]

It may be the case that PLR 201724013 addressed a time period before the effective date of the F Reorganization regulations discussed above, and there is no need to make a Qsub election as an interim step before converting OldCo to an LLC. To avoid any problems, however, follow the steps and sequence outlined above.

Beginning in the year of the F Reorganization, all future income tax filings must be made by the Resulting Corporation using its new EIN number.[10] From an income tax perspective, the NewCo will be treated just as OldCo would have been treated if there had been no reorganization, including succeeding to the S election previously made by OldCo.[11] The taxable year for OldCo will not end on the date of the reorganization; instead, all the tax attributes of OldCo will become tax attributes of NewCo.[12] OldCo would not need to file its own separate income tax return in the year of reorganization and the years following, until there is another change in circumstance that would trigger a filing obligation. Remember, in essence, NewCo and OldCo are the same entity for tax purposes.

To properly notify the IRS that an F Reorganization has occurred in a given year, the NewCo should file a statement pursuant to Treas. Reg. § 1.368-3 with its federal income tax return. This statement must include the names and EINs of the parties involved, date of the reorganization, and the value and basis of the assets of OldCo, among other items.

While there are certainly others, here are several examples of where F Reorganizations can be a useful planning technique.

1. Enabling the sale of an LLC interest as opposed to S corporation stock.

Performing an F Reorganization prior to the sale of a business owned by an S corporation can enable the seller to sell a subsidiary single member LLC interest, not the corporate stock directly. By purchasing a single member LLC interest, the buyer would receive a step up in basis in all of the assets held by the LLC at the time of purchase.[13] Moreover, by purchasing the entire equity interest outright, there may be less of a legal and compliance burden as far as obtaining third-party consents for transferring assets. Further, buyers of an LLC interest would not need to worry about the limitations associated with owning S corporation stock. Subchapter S of the I.R.C. has strict rules for who can be an S corporation shareholder (e.g., no more than 100 shareholders, no foreign persons, no regarded entities, and only certain trusts).

As mentioned above, S corporations restrict who can be shareholders. For example, corporations and entities classified as partnerships for tax purposes cannot be S corporation shareholders, nor can foreign persons and certain trusts. As businesses scale up and take on new investors, they may want to issue equity to new investors who would be ineligible to own shares in an S corporation. Performing an F Reorganization can be a useful way to bring on those investors and retain pass-through tax treatment. After an F Reorganization is complete, the LLC subsidiary could issue equity interests in exchange for cash to those investors, or NewCo could sell a portion of OldCo and distribute the sales proceeds to its shareholders. OldCo would be classified as a partnership for tax purposes, and NewCo would retain its status as an S corporation.

Equity rollover transactions are popular methods for keeping past shareholders and owners invested in the future success of a business even after a significant portion of the business is sold. Target corporations can first perform an F Reorganization, then allow some of S corporation shareholders to retain shares of the S corporation as a means of rolling over their equity on a tax-free basis. This is more tax-efficient than having all shareholders sell all of their shares in NewCo (or OldCo) (and trigger gain) before reinvesting a portion of the proceeds in the acquiror.[14] Another possibility would be for OldCo to issue profits interests to key employees of NewCo.

4. Selling less than all the assets of a business.

The corporate freeze is a term used when a corporation creates at least two tiers of shares (preferred and common), but the upside value of the business is mainly held by one of the classes. In a typical freeze structure, the value of the preferred shares is limited to a liquidation preference and a modest annual rate of return. The upside value of the corporation is then housed in the common shares. In this way, the preferred interest is deemed to be “frozen.” (The same concept can be applied in the LLC or partnership context with the issuance of preferred units.) The F Reorganization can facilitate a freeze when you have an existing corporation by creating a two-tier structure where a corporation owns the preferred shares or units of a subsidiary corporation or LLC, and then new common shares or units are issued to new owners/investors in the subsidiary. [15] See our article “Exploring the Benefits of the Corporate Freeze Transaction” for a detailed discussion on this topic.

6. Restructuring an S corporation to enable the issuance of C corporation stock that might qualify as qualified small business stock under § 1202.

I.R.C. § 1202 has become a popular topic for many small businesses and startups in recent years because of the immense value it can bring to owners of qualified small business stock (“QSBS”) in the form of a capital gain exclusion. One common problem that investors run into with § 1202 is the requirement that only domestic C corporations can issue QSBS. S corporation shareholders cannot merely terminate the S election in the hope that their former S corporation stock will qualify as QSBS; there is a requirement that the corporation issuing QSBS must be a C corporation, not only at the time QSBS is issued but also at all times during the taxpayer’s QSBS holding period.[16]

As highlighted in this article, the F Reorganization can be a useful tool in the tax practitioner’s kit for effecting a change of entity. The F Reorganization enables restructuring to be done on a tax-free basis and it can be very valuable in pre-transaction planning.