Is Nurofen better than Panadol for a headache? The Federal Court decides

When one medicine is advertised as being more effective than another, the Court examines the scientific studies to decide if they support the advertised claims sufficiently to comply with the consumer law provisions concerning false and misleading advertising.

The Federal Court of Australia was in this position in in GlaxcoSmithKline Australia Pty Ltd v Reckitt Benckiser (Australia) Pty Limited (No 2) [2018] FCA 1 (Foster J) (8 January 2018).

The Federal Court needed to decide whether or not it was false, misleading or deceptive for Reckitt to claim that:

if consumers take Nurofen as directed, they will obtain relief from the pain which they may be suffering from a common headache, faster and more effectively that they would experience if they took Panadol or paracetamol instead (p 136, judgment)

Commencing in August 2015, Reckitt undertook an advertising campaign to promote Nurofen as better than Paracetamol. It ceased in December 2015, pending the outcome of the proceedings.

This is an example of a print advertisement: 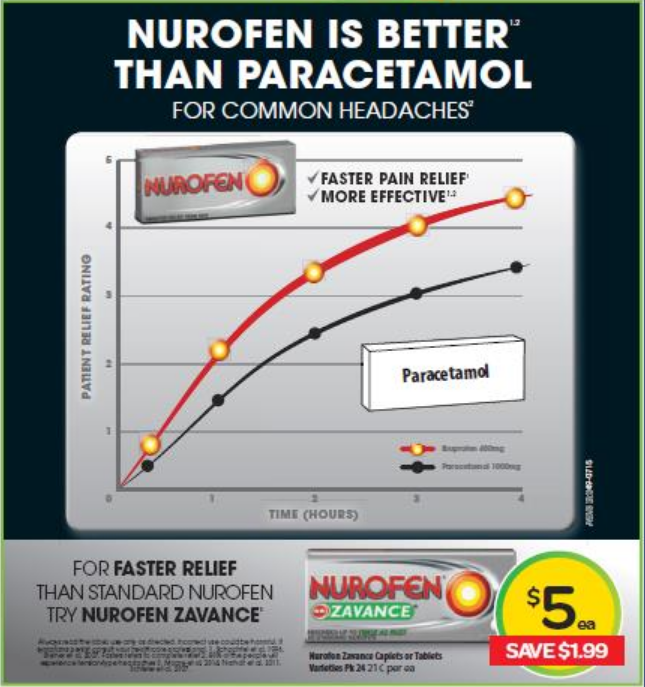 The pain relief market in Australia

The Head of Category & Shopper Marketing ANZ at Glaxo gave this evidence which demonstrated why the stakes are so high in this market:

These facts provide the commercial reason for bringing the proceedings.

The law of comparative advertising

Comparative advertising must be based on fact, not opinion. The Court quoted these statements with approval:

Was there an adequate foundation in scientific knowledge to support the claims made?

If so, there are reasonable grounds to make the claims. If not, the claims are false.

Reckitt relied primarily upon the Schachtel Study, which was a single clinical study. It was conducted in 1996 and established statistically significant superiority in terms of speed and efficacy of treatment for ibuprofen over paracetamol. The graph was sourced from the study.

The results were not replicated in two further studies designed to compare the speed and efficacy of treatment as between ibuprofen and paracetamol with respect to pain free relief at two hours after dosage.

Both parties relied upon expert evidence to advance their cases. The experts relied upon the Cochrane Collaboration, which is a source of high-quality information about the effectiveness of health care.

Both experts agreed that the Cochrane meta-analyses based on the application of scientific and arithmetical computer programs are a gold standard for evaluating and comparing medication efficacy (and safety) and are more informative than single clinical trials as they synthesise the results from all relevant studies.

The Cochrane meta-analyses (2015 & 2016) concluded that ‘no claim of superiority could justifiably be made by ibuprofen over paracetamol in the present state of scientific knowledge’.

The Court concluded that Reckitt had advertised without sufficient scientific knowledge and had therefore breached the Australian Consumer Law (sections 29(1)(a) and 29(1)(g)):

In my view, it is misleading or deceptive or likely to mislead or deceive consumers in Australia for Reckitt to claim that ibuprofen (Nurofen) provides faster and more effective relief from pain caused by common headaches including TTH (tension-type headaches) than does paracetamol (Panadol) when the only study which supports such a clear cut claim is the Schachtel Study and where the balance of the scientific knowledge is as I have explained it above. (p 207)

Glaxco will not ask for corrective advertising. It will ask for damages or compensation at a hearing to be held at a future date.

It is interesting to observe that the consumer regulator, the ACCC, did not intervene in this dispute. The ACCC left it to Glaxco to protect the consumer from the false and misleading advertising, no doubt relying upon an alignment of the public interest and Glaxco’s private interest.