In this article, we recap on the earlier Teva v EMA decision and summarise the recent outcome in Shire v EMA. We have also included relevant parts of the Regulation 141/2000 on Orphan Medicinal Products in the Annex hereto.

This case concerned imatinib, a cancer drug marketed by Novartis under the brand name Glivec®. The orphan designation in question was chronic myeloid leukaemia (CML), for which Glivec was approved in November 2001.

A few years later, Novartis developed another cancer drug for treating CML, nilotinib (branded Tasigna®), for which it successfully applied for orphan designation and marketing approval; the latter being secured in November 2007.

Two upfront issues arose in respect of the authorisaton of Tasigna, both of which it overcame:

Accordingly, the regulatory timelines for Glivec and Tasigna were as follows:

Once Tasigna had surpassed the above issues and was authorised as an orphan drug, key questions arose as to the scope and duration of its orphan market exclusivity. In particular:

These issues came to the fore when Glivec’s ten year market exclusivity expired, when generic pharmaceutical companies began to apply to generic versions of Glivec. This posed the question of whether such applications would be prohibited as infringing upon Tasigna’s orphan market exclusivity by virtue of Article 8(1) (see Annex) on the basis that: (i) a generic version of Glivec would be similar to Tasigna; and (ii) may cover the same indication (ie in relation to CML).

Teva made its generic application in January 2012 and (insofar as it applied to CML) the EMA rejected it on this very basis. Teva challenged that decision before the EGC.

Teva sought to attack the award of Tasigna’s authorisation (in terms of whether it was a “significant benefit” under Article 3(1)(b)) but these arguments were deemed inadmissible for being procedurally too late. Therefore, the dispute focussed only on Teva’s arguments that the orphan drug system should not lead to the outcome that a second drug (in this case owned by the same company, Novartis) could in effect further extend the period of market exclusivity for a first orphan drug beyond 10 years.

Teva’s arguments included that: (i) similar orphan drugs authorised under Article 8(3) should not enjoy the same ten year exclusivity period under Article 8(1) and the general rule should be construed narrowly; (ii) prolonging protection for a first drug in this way could result in practically 20 years’ protection, which Teva said would create a perverse incentive for companies to develop a series of slightly different, but nevertheless similar, orphan products; and (iii) if the second drug were awarded 10 year orphan market exclusivity, the scope should nonetheless be disclaimed in respect of any earlier similar medicinal products such as Glivec in this case.

All of Teva’s arguments were rejected both at first instance before the EGC and on appeal to the CJEU. Both decisions emphasised the need to incentivise the development of orphan drugs and viewed the orphan system in a positive light.

For orphan medicinal products, the Paediatric Regulation (1901/2006) provides the incentive of extending orphan market exclusivity by two years; ie 12 years in total (Article 37). This is mutually exclusive to the incentive available to non-orphan medicinal products, which is a 6 month supplementary protection certificate (SPC) extension (Article 36).

In April 2012, Novartis unilaterally withdrew the orphan status of Glivec and then subsequently - based on the completion of a PIP and application for a paediatric indication for Glivec - applied to extend its SPC covering Glivec by six months; ie treating it as if it was a non-orphan medicinal product. This was also challenged by Teva.

The dispute went to trial in the Netherlands, in which Novartis’ approach was held to be legitimate based on the orphan status withdrawal and so the SPC extension was upheld. We are not aware of other European decisions relating to Novartis’ Glivec’s SPCs; but note, for example, on the UK register that the SPC(GB) was extended.

The following diagram summarises the facts of the above disputes relating to Novartis’ products in the disputes with Teva, including in respect of both the orphan market exclusivity periods and the patent/SPC which Novartis appear to have obtained: 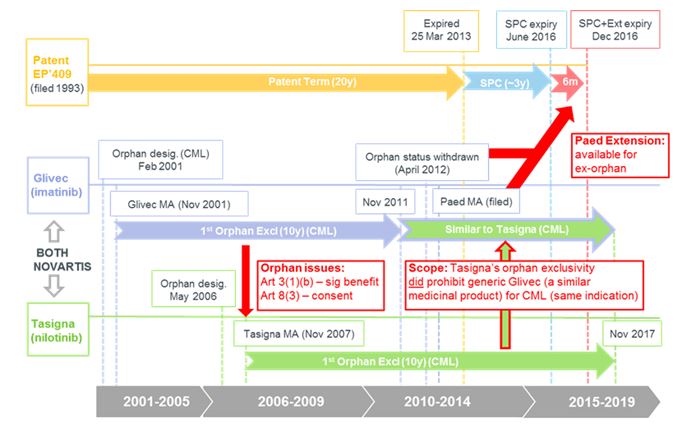 Provided that it is effected in time (prior to the relevant paediatric indication being applied for), voluntary withdrawal from orphan status has been held to be sufficient to switch between the incentives available under the Paediatric Regulation - ie from two more years orphan market exclusivity to a six month SPC extension.

In its recent decision (dated 22 March 2018), the EGC confirmed and expanded upon the Teva v EMA decision in relation to the ability to obtain an independent 10 year orphan market exclusivity period for a later, similar medicinal product - holding that this might be achievable even when the second medicinal product contains the same active substance.

The relevant active substance in this case is idursulfase, which was developed by Shire and was designated as an orphan medicinal product for the treatment of Hunter’s Syndrome in 2001. In 2007, Shire obtained a marketing authorisation for Elaprase® (which had an intravenous route of administration).

In 2016, Shire developed idursulfase IT, another medicinal product containing idursulfase but which is administered via injection into the spinal canal. The latter provides benefits for treating neurological disorders associated with Hunter’s syndrome (eg in terms of active substance crossing the blood brain barrier). During the development of idursulfase IT, Shire applied for a new orphan designation on the basis that idursulfase IT provided a “significant benefit” to patients (Article 3(1)(b)).

The EMA refused to validate Shire’s application on the basis that the request was not made prior to the application for a marketing authorisation because Elaprase - a product containing the same active substance - was already granted. Further, the EMA stated that the new product was within the existing orphan designation for Elaprase which was general / broad (ie it did not refer to a specific mode of administration for idursulfase).

The EGC overturned the EMA’s decision and held that (in summary):

The outcome of this decision, subject to any appeal, is the annulment of the EMA’s rejection (and the EMA bearing their costs and paying Shire’s).

As for Shire’s application for orphan status for idursulfase IT, this should now be validated by the EMA and proceed to be assessed for “significant benefit” - which the EGC remarked may be demonstrated by way of a “clinically relevant advantage” or as a “major contribution to patient care” (which could be achieved via an increased supply of product, ease of self-administration or a more convenient formulation or route of administration).

Given the shared active substance, it seems likely that Article 8(3) will also need to be satisfied for a later, “similar” medicinal product. Similarly to Teva v EMA, this may be achieved in this case via consent given that the holder/applicant of both authorisations is the same. Also following Teva v EMA, if idursulfase IT successfully obtains orphan status, it would benefit from a further, independent 10 year market exclusivity period; including again the potential of prohibiting generic versions of Elaprase after its own market exclusivity expires.

Overall, this case expands the principle derivable from Teva v EMA that a pharmaceutical company might develop a second active substances for the same orphan designation to one where the second medicinal product contains a new formulation of the same active substance (provided of course that a “significant benefit” is provided).

For the purposes of this Regulation: