The Australian Competition and Consumer Commission (the Commission) has recently cited difficulties in proving that some mergers would result in a breach of Australian competition laws as part of a desire to explore whether Australia’s merger control regime needs reforming. For example, after a single judge of the Federal Court of Australia dismissed the Commission’s application in relation to Pacific National’s acquisition of Aurizon’s Acacia Ridge Terminal, ACCC Chairman Rod Sims made a number of statements on the need for merger reform: “I think we need a real rethink on how merger issues are dealt with in Australia… You’ve seen the Macquarie-AGL decision, you’ve seen this one – we have a problem”.[1] The Commission has applied to the Full Court of the Federal Court for review of the judge’s decision.

Our research into outcomes in contested effects (and purpose) cases do not provide support for over-hauling Australia’s merger control regime. At most, it could be that the processes for assessing mergers requires fine tuning but more experience for the recently enacted formal merger clearance process is needed before any decision is made.

Contested effects and purpose-cases – the Commission versus private litigants

In contrast, over the same period, the Commission won about 60% of its 15 contested purpose-cases.[4]

Private litigants had lower rates of success than the Commission in both types of cases – contested effects cases and contested purposes cases.

Private litigants won 25% of the contested effects-cases they commenced during the last 45 years.

In contrast to the Commission, private litigants won even fewer of the contested purpose-cases they commenced over the same 45-year period - only 16.3% of the cases.

This is a very small number of cases.

On average, there is 1 contested merger case every 5 years.

Of the 9 contested merger cases, there have been 3 occasions where the Court found the merger would result in a breach of section 50.

At the time, in each of the 3 cases, the mergers test was whether the merger would result in, or substantially strengthen a position to control or dominate a market.

In another 1 of the 9 cases it was found that the merger would be likely to have the effect of substantially lessening competition in a market, but the substantial part of the effect would be removed by a behavioural undertaking. The case was Pacific National/Aurizon. The decision in Pacific National/Aurizon is subject to an application to review to the Full Court of the Federal Court, so it has not been finally determined.

In 1 case – Australian Iron and Steel – it was found that section 50 did not apply because there was no indirect acquisition by a corporation.

In 3 other cases – Ansett, AGL/Loy Yang A and Metcash – it was found that the merger would not be likely to have the effect of substantially lessening competition in a market.

The remaining case – TPG / Vodafone – is awaiting judgment. Judgment is expected in February 2020.

If success is measured by a finding that the merger would be likely to have the effect of substantially lessening competition in a market, or the higher test of creating or strengthening a position of dominance in a market (and not whether the substantial part of the effect could be remedied by an undertaking), the result is that the Commission has a success rate of about 44% in contested mergers cases.

Alternatively, if success is measured by whether the merger is blocked by the Court, the Commission has a lower success rate of about 33%. This is a success rate that is about 8% higher than the success rate of private litigants in other contested effects cases. 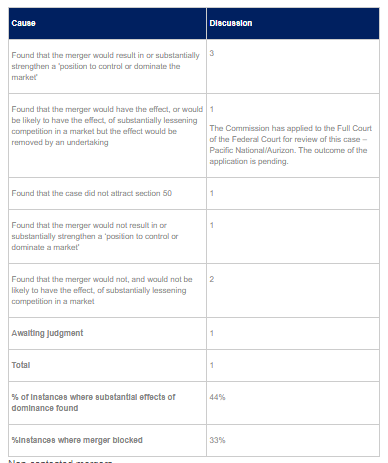 We have not been able to accurately identify the total number of mergers assessed by the Commission since 1974, under its voluntary and investigative processes.Non-contested mergers

However, we have been able to identify that over the last 25 years (between 1993 and 2018), the Commission and its predecessor considered about 6,425 mergers.

On average, over that 25-year period, 96% of mergers were cleared. A small proportion of them were cleared conditional on undertakings.

On average, over the same period (1993 to 2018), the Commission opposed about 2% of mergers. Again, a very small proportion of all the mergers considered by the Commission.

The remaining 2% of applications were withdrawn, either because the transaction was not going to proceed for business reasons or, in some cases, because the applicant was concerned the Commission was going to oppose it.

In 1995-96, the former Trade Practices Commission publicly opposed 9 of the mergers it considered. That remains the largest number of mergers publicly opposed in any of the 25 years. Usually, the Commission opposes between 1 and 5 mergers each year. There are some years where it has not opposed any.

The Commission, in its role as amicus curiae to the Tribunal, opposed all 3 applications for authorisation. However, the Tribunal authorised all 3 mergers subject to conditions.

The Commission and its predecessor, the former Trade Practices Commission, have been the first instance decision-maker for applications for authorisation of mergers for 35 out of the last 45 years.[6]

During those 35 non-consecutive years, the Commission considered 11 applications for authorisation of mergers.

The Commission declined to authorise 6 of the applications because it was not satisfied that the merger would, or would be likely to, result in a net benefit to the public.

In 1 of those 6 cases, Air New Zealand / Qantas, the Australian Competition Tribunal overturned the Commission’s determination and authorised the proposed merger.

The remaining 5 applications were authorised by the Commission as the first instance decision-maker, in each case subject to conditions.

Some types of forecasts are more challenging to prove than others. To prove, on the balance of probabilities, a forecast that something would be likely to have the effect of substantially lessening competition in a market is a more complex exercise than proving that a specified train, with a known payload, travelling on a particular track, at a defined speed, will arrive at a destination at a given time.

To prove a forecast that something would be likely to have the effect of substantially lessening competition in a market usually means the Court must choose between competing views of equally well qualified economists, each of whom will have undertaken detailed regression and other analyses and industry experts.

In contrast, proving an anti-competitive purpose might only require a smoking gun document and an executive who is found to lack credibility in the witness box.

What the data shows

The overwhelming majority of the many thousands of mergers considered by the Commission have been cleared without conditions.

Only about 2% of them have been cleared subject to conditions and, on average, each year, only about 2% are opposed by the Commission.

Only a very small proportion of the mergers opposed by the Commission are litigated. On average, over the last 45 years, only 1 merger is litigated every 5 years.

No matter how you measure success in this very small number of cases, the Commission is doing relatively well, especially when compared to private litigants.

If success is measured by whether the merger is blocked by the Court, the Commission’s success rate is lower - about 33%.

One possible conclusion from the outcomes of the contested mergers cases and applications for authorisation of mergers is that, when the Commission is put to proof, it has not always been able to prove its case.

That could mean there is a gap in the law.

The facts do not indicate a gap in the law and do not provide strong support for a need to amend section 50.

Further, there does not appear to be any in-principle justification for amending section 50 but not the effects-limbs of sections 45, 46 and 47 of Australia’s Competition and Consumer Act (which also prohibit conduct that would be likely to substantially lessen competition in a market).

There has only been 1 case which has used the new formal merger clearance process – AP Eagers – and it was cleared on time subject to conditions and without controversy.

In our view, reforming Australia’s merger control regime is not justified.

The Commission should not expect to win every merger case, or even the vast majority of merger cases. It is natural that, in an adversarial system, in cases where both sides are well-represented and have received advice that their case is worth taking to trial, the ACCC will lose some cases. In addition, part of the ACCC’s role is to test the law, which involves taking some risks in order to obtain clarity for the future, even if it means losing a case.

Australia’s Federal Government enacted laws in November 2017 to make the ACCC the first-instance decision maker for all mergers, including applications for authorisation of mergers, following the Commonwealth Government’s “root and branch” review of competition law and policy in Australia (culminating in the Harper Report). The Harper Report concluded that “overall the merger provisions of [Australia’s competition law regime] are working effectively” and did not recommend any changes to the substantive law.[7]

Finally, as we set out above, the statistics show that the Commission has a relatively good track record in contested cases, Including merger cases.

These statistics also do not consider the many potential transactions that do not make their way to the Commission for consideration. Based on advice from external legal counsel, many deals do not proceed on the basis that they are likely to lead to a substantial lessening of competition. This is further support that the current system is an effective one.

In these circumstances, we consider that the best path forward for the Australian economy is to allow the merger regime to continue working well until the data shows otherwise and to reassess the performance of the changes made in November 2017, once we have more than 1 (relatively straight-forward) case under the new laws.