The Commodity Futures Trading Commission (“CFTC”) recently released its statutorily mandated 2019 Annual Report covering the fiscal year ending on September 30, 2019. The report, prepared by the CFTC’s Whistleblower Office (“WBO”), outlines the tips received and awards granted during the fiscal year, and describes the status of the WBO’s initiatives to educate consumers about its whistleblower program.

Under the program, whistleblowers who voluntarily provide original information about violations of the Commodity Exchange Act are eligible to receive between 10 and 30 percent of resulting sanctions that exceed $1 million. Eligible sanctions can be collected via CFTC enforcement actions or related actions by other federal regulators. 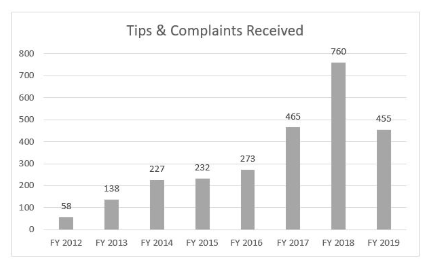 During FY 2019, the WBO also received 102 non-whistleblower tips and 35 referrals from the SEC, which it forwarded to the CFTC’s Division of Enforcement for evaluation and disposition. These tips involved topics ranging from money laundering, false reporting and foreign bribery to insider trading and retaliation against employees.

During FY 2019, the Commission granted five whistleblower awards and denied awards on 129 applications, primarily because the applications did not relate to a qualifying sanction obtained by the CFTC or other regulatory agency.

The CFTC does not provide identifying information regarding award recipients and the related enforcement actions, but did briefly summarize the five awards announced in FY 2019:

The WBO continues to prioritize outreach efforts to educate industry stakeholders about the whistleblower program. Its efforts include presentations and attendance at seminars, conferences, and other professional gatherings.

The WBO’s website, https://whistleblower.gov, was launched in January 2016. It offers information about the whistleblower program, answers to frequently asked questions, and allows online submissions of whistleblower tips about potential violations of the CEA and award applications. The website received nearly 250,000 page views during FY 2019.

In addition, the CFTC’s Office of Customer Education and Outreach is responsible for educating the public about identifying and reporting fraud related to new technologies, such as machine learning, cloud technologies, and virtual currency.