Cadbury India Ltd., now known as Mondelez India Foods Pvt. Ltd. (Cadbury) is the registered proprietor of the mark ‘GEMS’ for button chocolate covered with colourful candy shells. Cadbury also has copyright registrations in respect of a character known as ‘GEMS BOND’ which has been used Cadbury for promoting ‘GEMS’. 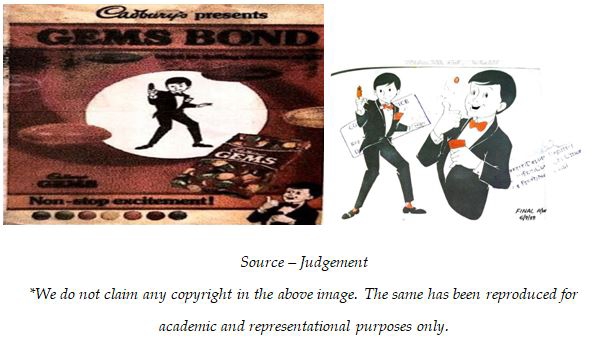 In 2005, Cadbury filed a suit in the Delhi High Court against Neeraj Food Products seeking a permanent injunction and damages for infringing its registered trademark “Gems”.

Cadbury claimed that, Neeraj Food Products had violated its trademark and copyright rights and using the mark ‘James Bond’ and ‘Jamey Bond’ with the image of chocolate buttons of similar colours as that to Cadbury on its packaging. 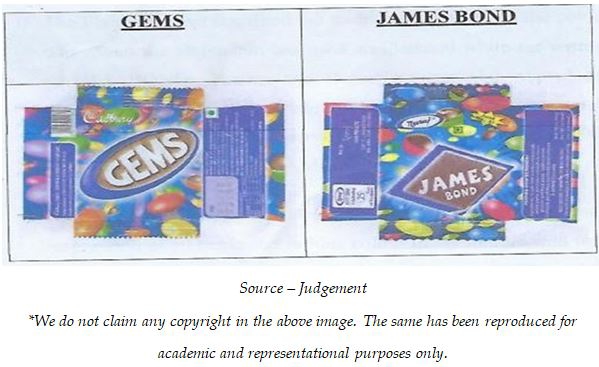 Though Neeraj Food Products had initially entered appearance, however the suit later proceeded ex-parte since no documents were filed to support its case, except a few raw invoices which dated back to 2001-2002.

The Court after comparing both the productsobserved that, Gems was one of the most popular and well-recognized chocolate products in India. The Court further observed that, trade dress i.e. get up, layout; colour combination of the packaging of a product’s played a significant role at the point of purchase. Thus, there was an immense likelihood of confusion, particularly considering the class of consumers that the product is targeted i.e. children.

Hence the Court held that, Cadbury’s packaging was unique and it was the registered proprietor of the trademark ‘Cadbury Gems’ as well as the artistic character known as ‘Gems Bond’. It was further held that,the infringing product were a complete knock-off of Gems.

Hence the Court concluded that not only did Neeraj Food Products infringe Cadbury’s mark, but had also constituted passing off and granted a permanent injunction in favour of Cadbury. The Court also directed Neeraj Food Products to pay an actual cost of ₹15.86 lakh worth damages to Cadbury within three months of the passing of Order.

Hence the Court not only strengthened the scope of proprietary rights of a registered trademark and copyright owner but also created a deterrent by awarding damages within the infringers who ride on the goodwill and reputation painstakingly accrued by the registered proprietors.