Lee and Li Attorneys at Law

Apart from pure texts, the Facebook(hereinafter ''FB'') or Line sticker is an alternative for Internet users to respond to others in either a clear and expressly manner or a deliberately obscure way.  The power of image given by FB or Line stickers enables users to adequately express how they feel or how they react, so FB or Line stickers are immensely popular among users.  Given that FB and Line have already become the top spots in the market share of social communication software in Taiwan and that increasingly number of local consumers love to buy the stickers, they have already become ones of the main economic markets for illustrators to release their works and get remunerations therefrom.

''Sticker illustrations'' are protectable within the scope of ''artistic works'' defined in the Copyright Act.  Consequently, disputes over copyright infringement including plagiarism may subsequently arise.  In particular, the party who has infringed upon another's copyright is held responsible for ''civil liability'' and ''criminal liability'' as well.  Therefore, litigation in respect of copyright infringement among illustrators is nothing new.

The FB or Line sticker illustration often takes a personified animal as the leading character, such as puppy, kitten, bunny, and so on.  But taking the kitten as an example, how can a work be determined to be independently created by an illustrator without committing plagiarism?  Will an illustrator get involved in plagiarism just because of his/her change of painting style?  Is the technique of how the kitten’s hair color, eyes, mouth and nose, body proportions, pointed ears or round ears, and body posture are expressed considered a basic painting technique or a plagiarism?  Moreover, an illustrator may more or less change the original appearance of the character he/she has created just because he/she has different thoughts afterwards.   This will further make a judgment on copyright infringement more complicated.

The case was then referred to the Criminal Division of the New Taipei District Court for the first instance, and another professor of law was invited for a new appraisal.  Nevertheless, this new professor holds different opinions from the previous one.  Based on an ''overall comparison and assessment of the cat faces '', the second professor concluded that both parties’ artistic works are not substantially similar for the following main grounds:

“In comparing the two works, they may be identical in the lines of the face, the angle of the ears, and the spacing.  However, …cats are real animals and have common postures or noble images.  Moreover, FB or Line stickers are created for day to day communication.  Therefore, it is common for the cat movements and conceptions as shown in different stickers to be the same.  As the creation of stickers is limited by the size of the dialog box, the cat face in the stickers often accounts for the largest proportion.  Accordingly, it is the main distinctive feature that viewers would pay attention to, and is particularly important in assessing if there is any substantial similarity.  In this case,... the two works are different in the color of the hair, the tabby, the color and shape of the mouth and nose, and the color and proportion of the blush on the cat faces, and also in the character personality as presented, thus rendering the overall concept and feeling different.  It is hard to determine that they are substantially similar.”

Therefore, the New Taipei District Court has acquitted the defendant (see Criminal Judgment No. 107-Zhi-Su-Zi-4 of the New Taipei District Court, Taiwan).  The judge opined that, "The first professor concluded that the two works were substantially similar mainly because the Defendant transformed her painting style for the cat mouth and nose to the ‘cute egg-shaped mouth蛋蛋嘴’, thus rendering it be confusingly similar to the plaintiff’s work.  However, this appraisal failed to consider that the 'cute egg-shaped mouth蛋蛋嘴', which is a basic painting style, is common and widely circulated in the field of anthropomorphic animal illustrations.  This painting style should never be monopolized by the plaintiff, nor should it be protected by the Copyright Act.  In determining if there is any substantial similarity, this basic expression method should be excluded."  He further mentioned that, “To adjust or change painting style during one’s creation process is common.  In particular, the 'cute egg-shaped mouth蛋蛋嘴' is widely popular and not very exceptional.  Even if the defendant did change her painting style in a short time, it is hard to say that such change is unusual.  Moreover, the defendant has already provided more than one hundred pages of her manuscripts, showing variations in the face contour, ear drawing, mouth and nose shape, and eye shape.  Therefore, the defendant advocate's claim that after endless effort to try some combinations of different painting styles, the defendant has finally created the work 'Milk the king' is not absurd."

The plaintiff, i.e. illustrator of "Pockycat", claimed that the defendant, i.e. illustrator of "Milk the king", has, since May 2015, reproduced the artistic work "Illustrations of Emily and Pocky " into "Milk the king", which is substantially similar to "Illustrations of Emily and Pocky" whether in appearance, facial expression, posture or overall graphic presentation.  The judgment of second instance for this case was finally given by the Intellectual Property Court on 14 November 2019.  During such period of about four and a half years, different professors have different appraisal results about plagiarism.  This further proves the intricate nature of cases about copyright infringement assessment.  Accordingly, illustrators of FB or Line stickers must be discreet about their creations, and also have to keep their manuscripts safe.

Note: Annex II with the Criminal Judgment No. 108-Xing-Zhi-Shang-Su-Zi-41 by the Intellectual Property Court: Chart on comparison of the plaintiff's illustration "Pockycat" and the defendant's illustration "Milk the king" 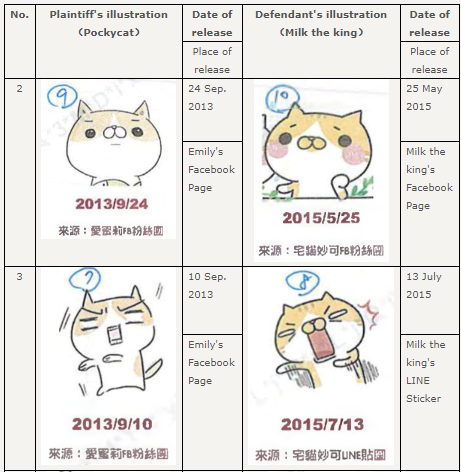 Lee and Li Attorneys at Law - Audrey Liao
﻿
Back Forward