Women have worse outcomes in virtually all respects when it comes to securing US patent rights, study finds

Not only do women inventors submit far fewer US patent applications than men, but they also have much greater difficulty in obtaining and maintaining rights, a new study has revealed. The first-of-its-kind research found that female applicants are more likely to have their applications rejected and less likely to appeal these rejections. Women also had fewer claims allowed on average, while their granted patents received fewer citations and were less likely to be maintained.

Published earlier this month, the paper – Gender differences in obtaining and maintaining patent rights – was able to examine roughly 2.7 million patent applications between 2001 and 2014 thanks to a newly accessible database from the USPTO. This information was then paired with the USPTO’s maintenance-fee and full-text patent databases. The probable gender of each inventor was determined by using forename gender distributions from the US Social Security Administration and two commercial databases.

The research was authored by Kyle Jensen, Balázs Kovács and Olav Sorenson at the School of Management of Yale University. Speaking to IAM, Kovács stated: “We noticed there were few, if any, studies on the effects of gender in the patent field. And, before the USPTO released its aggregate patent data, it was not possible to conduct this kind of research.”

The main finding from the study was that female inventors were 21% less likely to have their patents granted than their male counterparts. However, Kovács stresses that this is without any fixed effects being accounted for; this figure varies significantly when controlling for different variables, as seen in the graph below. 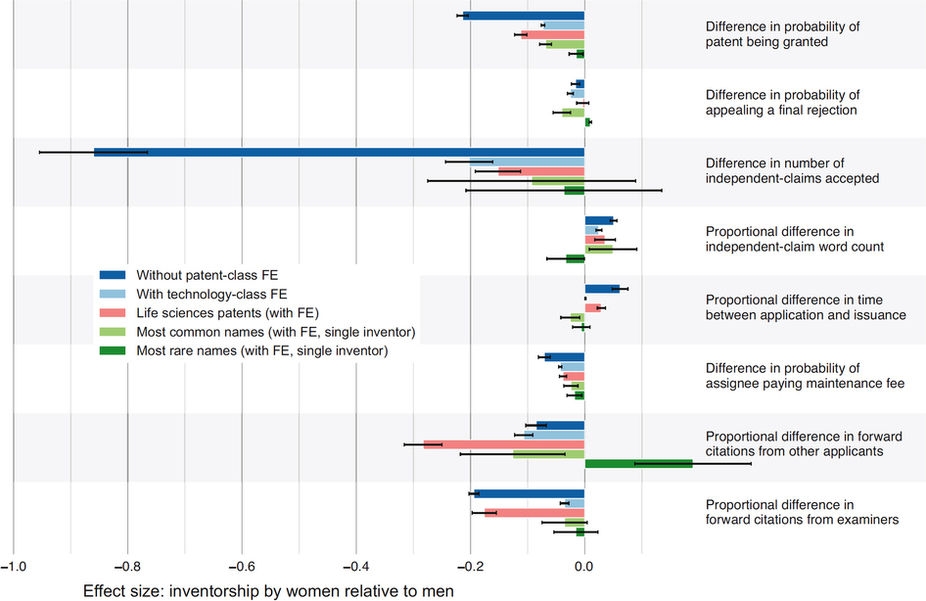 For example, when taking into consideration the application’s technology class, women were only disadvantaged by 7% compared to men, meaning that their less favourable outcomes stemmed at least partly from the fact that they were applying at higher rates than men in technology classes which had lower acceptance rates (regardless of gender).

But even after taking this into account, women still fared worse in practically all circumstances. They were less likely to have their rejections appealed; while even when granted, their patents had the number of independent claims reduced compared to men and the number of words added to their claims increased by 2.5%, so lessening patent scope. Their patents also received 11% fewer citations from other applicants and 3.5% fewer citations from examiners.

By comparing the results between common and rare names, the paper was able to identify that the reasons for the differences between the outcomes for men and women were likely to have arisen from the examiner side as opposed to the applicant side. Common names like ‘Robert’ or ‘Mary’ would allow examiners to deduce the gender of the applicant with a high level of confidence, whereas rarer names such as ‘Jameire’ and ‘Kunnath’ would not, despite these names also being strongly associated with gender (male and female respectively).

Kovács provides one possible explanation for this: “We did not explore why women with rare names performed significantly better than men with rare names, but it may be because women have higher quality patents, which would lead to more citations. This would only show, though, if the examiner was not able to initially infer the applicant’s gender.”

This was one of only two circumstances where women did not fare worse than men, the other being the difference in time between application and issuance. “In this case, it is essentially the same for both men and women”, says Kovács.

Although the paper highlights that, whether consciously or subconsciously, examiners appear to be biased, Kovács mentions that the difference in the probability of women inventors paying maintenance fees may indicate some internal bias, too. He states: “As most inventors are part of a company and it is the company that typically chooses whether to pay the maintenance fee or not, the fact that the patents of women were less likely to be maintained by their assignees might mean there is bias or pressure within the company for women not to pay.”

One final interesting finding was that the disparities for women were more pronounced in the life sciences, despite their relatively higher representation in the field. The paper notes that in the life sciences an all-women team of inventors was 11% less likely to have its application accepted compared to a team of all-male inventors.

The authors of the paper suggest one possible solution for the differences in outcomes between men and women would be to make the patent prosecution process more ‘blind’ regarding the identity of applicants. They point out that such processes have previously helped to eliminate gender biases in other settings. However, Kovács notes that although women clearly have a disadvantage when trying to secure patent rights, the far bigger problem is that there are not enough women submitting applications in the first place. Indeed, women currently make up only approximately 10% of US patent inventors, and to say this is a serious issue would not be an overstatement: another recent study showed that if women, along with minorities and those from low-income backgrounds, innovated at the same rate as high-income white men the level of innovation in the US would quadruple.

The good news is that this issue continues to gain recognition. World IP Day is just around the corner, with the theme this year being “Powering change: Women in innovation and creativity” – in celebration of this theme, IAM’s guest blog from Clarivate this month took a look back through history at the contribution of female inventors and innovators.