The below table lists the three subject matter groupings, together with descriptions and examples as provided by the 2019 Guidance. The three subject matter groupings (and their respective examples and descriptions) are based on Supreme Court and Federal Circuit precedent that “synthesize[] key concepts identified by the courts as abstract ideas.” 2019 Guidance at 52. 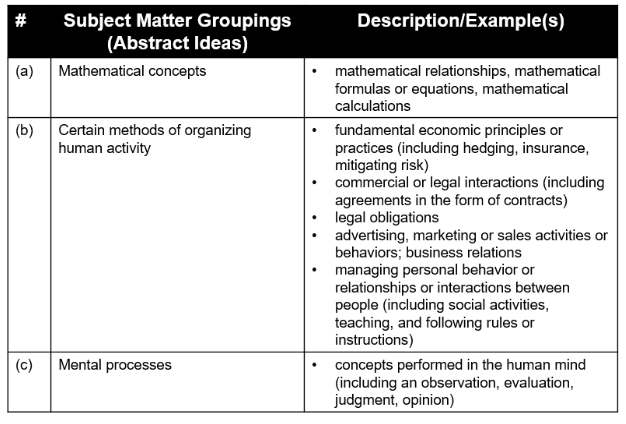 In addition, the below flowchart shows the conventional steps of the Supreme Court’s Alice test (Alice Steps 1 and 2) (i.e., USPTO Steps 2A and 2B, respectively.). The below flowchart also shows the two new prongs of Step 2A under the 2019 Guidance, including the three new subject matter groupings (a) – (c) of Step 2A, Prong 1. 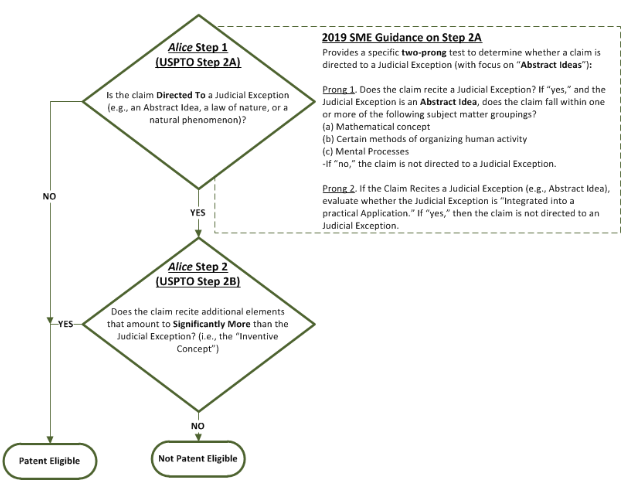 The above cases represent a selection of PTAB decisions that we reviewed related to software-related inventions. We found that, in all cases, in addition to analyzing the claims under the 2019 Guidance, the PTAB included in its decision a discussion of the conventional Alice two part test. In such cases, the PTAB treated the PTAB Guidance as persuasive authority only. This is not surprising as the 2019 Guidance does “not constitute substantive rule making and does not have the force and effect of law.” 2019 Guidance at 5. In particular, we note that, where the PTAB affirmed an examiner’s rejection (i.e., by affirming the examiner’s rejection that the given claims were directed to an “abstract idea,”), the PTAB’s decision focused more on an analysis of Supreme Court and/or Federal Circuit decisions rather on the 2019 Guidance.

Still, as the above cases demonstrate, the PTAB relies on, and regularly cites, the 2019 Guidance to formulate its patent eligibility decisions as to whether software-related inventions are patent eligible. We found that the most successful patentee arguments were those that argued Step 2A, Prong 1, i.e., that the claims did not fall within one or more of the specific subject matter groupings, which include (a) mathematical concepts; (b) certain methods of organizing human activity; or (c) mental processes. Under Step 2A, Prong 1, the PTAB used the 2019 Guidance to determine that, since the claims did not fall within one of the three subject matter groupings, the claims did not recite an “abstract idea,” and, thus, were patent eligible.

Patentees were also successful arguing Step 2A, Prong 2 and Step 2B, but such arguments generally required more of a showing, including specific citations by the patentee tying the claims-at-issue to the patent specification in order to demonstrate that the claims were “integrated into a practical application” (Step 2A, Prong 2) and/or amounted to “significantly more” than the given abstract idea (Step 2B).

In any event, as demonstrated in the case analysis above, the 2019 Guidance offers patent applicants a useful and effective tool to help demonstrate patent eligibility of software-related inventions. Practitioners and inventors seeking to overcome, or avoid, Section 101 issues would do well to draft or amend claims in view of the 2019 Guidance.