Privacy or Transparency in Condos: What Info Should your Neighbour Get About You?
Blog Condo Adviser

At the end of the day, we identified three groups.

The first group supports greater transparency and demands the right to know who their neighbours are. They feel that accessing the names and addresses for service of their neighbours is a basic right and a requirement to be able to communicate with them with respect to the affairs of the corporation.

The second group feels that privacy and the right to be left alone is more important. After all, if you want to know your neighbour, why not just knock on their door and introduce yourself.

Between these two camps, is the “consent-driven-tribe”. These feel that it should be left to individual owners to decide whether they want to grant their neighbours access to their personal information.

You may recall that we conducted 2 surveys on these issues. Well, the results are in!

Should owners be allowed to get the owners’ list?

You may recall from our post on this that the amended Condo Act specifically authorizes owners to examine or obtain a copy of the list of owners. We wondered how our readers felt about that.

An overwhelming number of our respondents (47%) were of the view that access to owners’ information should be consent-driven. That is, you should leave it to owners to decide whether they want their neighbours to be able to access their information. While the concept makes sense, I suspect that the vast majority of owners would opt out and chose to be on the “do not disturb” list. This would leave most information seekers hungry for more information.

What information should be disclosed?

Our next question focused on what owner information, if any, should be disclosed to other owners.

The majority of you (67%) felt that owners should be able to access the name and unit number. Only 23% felt that the postal address should also be disclose and only 22% felt that the email address should be disclosed. Well below that came those who thought owners should also have access to owners’ phone number. That tells us that nearly 80% of the respondents prefer to protect their privacy and do not want to hear from their neighbours.

Should owners be able to inspect proxies?

Our second informal survey dealt with whether owners should be able to inspect proxies and to what extent. You will recall that Ontario went to great lengths to revamp the proxies. The format was, at least in part, developed to allow easy inspection of the proxy, while preserving private information. A recent case from the Condo Authority Tribunal confirmed that, unless the corporation has a by-law to the contrary, owners are entitled to inspect the non-private information found in the proxy (ie, who was appointed and what was the vote). But owners would normally not see which owner granted the proxy.

So, how do our readers feel about it?

You may be surprised to hear that the majority of the respondents (55%) are of the view that owners should not be entitled to inspect proxies.

What proxy information should be disclosed?

We then asked what information should be disclosed to an owner inspecting a proxy. The answers were quite telling: 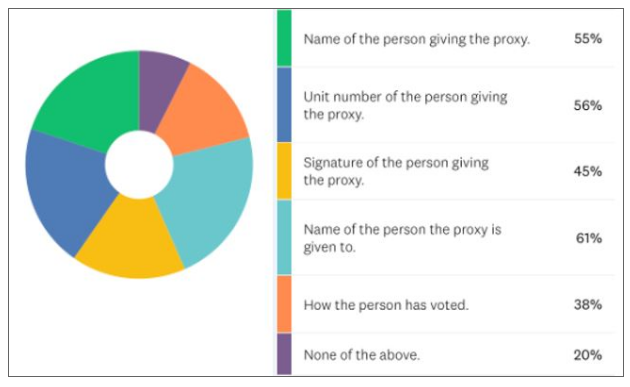 Who should inspect the proxy in case of dispute?

Perhaps my favourite question had to do with who is the best person to inspect proxies in case of a dispute.

What does all of that mean?

Time will tell how this strive towards greater transparency will evolve.