Renewable energy and Patents in India

India is the world’s third‐largest energy-consuming country with a population of approx. 1.3 billion. Studies indicate that energy use has doubled since 2000, with 80% of demand still being met by coal, oil, and solid biomass. The country’s economic growth demands increase in its energy resources, energy systems, and infrastructure.

As per International Energy Agency in its report “India Energy outlook” 2021, Rising population and incomes since 2000 have underpinned a doubling of energy use in India due to rising vehicle ownership, demand for construction material, and a rise in appliance ownership. However, per capita, energy use is still less than 40% of the world average.

As per Energy Statistics India 2021, India’s Energy mix has shifted from more conventional resources of energy to renewable sources. This is evident because while the installed capacity of renewable sources of electricity generation excluding hydro from utilities grew at 12% in the previous year (2020 over 2019), thermal sources grew only at 1.91%. 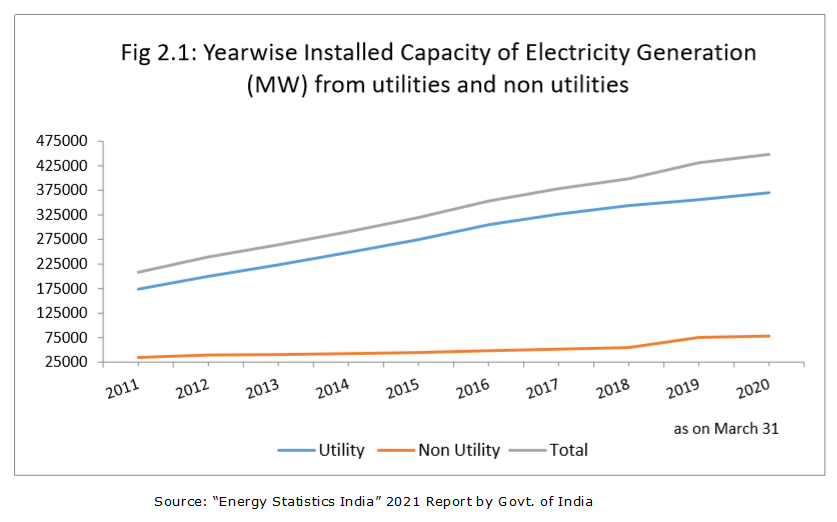 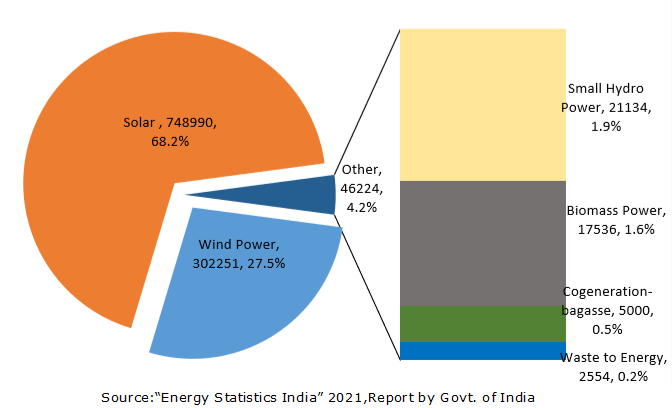 Patents and Statistics worldwide and India:

The renewable energy sector has seen major investment in the past decade, as evident from many products based on India’s solar cells and wind turbines. Innovative activity in green technologies, assessed on several patent filings, has also increased significantly in the past years.

As per the WIPO Magazine, published in March 2020, over the decade 2010 to 2019, Japan tops the leader board for the total number of patent applications for renewables in general and both solar and fuel cell technologies. The United States ranks highest for geothermal technology, and in wind energy, Denmark is top-ranked, followed by Germany.

As per the statistics published by WIPO, the growth rate in renewables is impressive: from 2002 to 2012, the number of PCT patent applications published for renewables increased by 547 percent. This corresponds to the decade in which most investments were being made in the sector, and innovation was promoted. And, although the total number of PCT publications has declined since the peak of 2012, in 2019, it was still 3.5 times higher than in 2002.

The total number of published PCT applications for renewable energy can be divided into four main sectors:

The most notable trend since 2002 is the growth of solar technology. In 2002, solar accounted for just over a quarter of published PCT applications for renewables, while in 2019, they accounted for over half of them.

Over the past 17 years, the number of published PCT applications relating to solar power increased by 678 percent. Solar has been the leading technology every year since 2009. It peaked in 2012 when 2,691 international patent applications were published. This investment in innovation reflects the growth of solar power generation around the world.

The Innovation index indicates that approx. 15% of India’s high-value patents are related to green tech. In 2013, Indian Patent Office received 1,140 patent applications in the domain of high-value green patents. India has an established industry in low-carbon environmental goods and services (LCEGS). It has the third-highest LCEGS sales in Asia (second-highest in terms of proportion of gross domestic product).

Solar photovoltaic has been the topmost technology for the absolute number of patents, followed by wind energy technology. There has also been an increasing trend (number of patents and growth rate) in batteries and pumped storage. Energy storage technologies have also seen improvement in terms of patent filing.

The patent applications relating to renewable or green technology are subject to the same substantive analyses or examination as regular applications in terms of examination parameters i.e. novelty, inventiveness, and industrial applicability. However, the patent applicant still faces hurdles in the quick grant of the patent. The more extended period between the filing of application till the grant of patent hinders the applicant’s ability to commercialize and license their technologies and secure early return on their investment. Stronger protection and enforcement of patent laws will help build confidence of foreign entities when sharing technologies with developing countries.

The Sustainable Development Goals (SDGs), also known as the Global Goals, were adopted by the United Nations in 2015 as a universal call to end poverty, providing quality education, good health, clean water, sanitation and energy, equality etc. overall to protect the planet, and ensure that by 2030 all people enjoy peace and prosperity.

There are a total of 17 SDG’s and the goal number 7 relates to providing affordable clean energy. The 17 SDG’s are integrated which means that they recognize that action in one area will affect outcomes in others, and that development must balance social, economic and environmental sustainability.

Towards its SDG commitments, India is taking several initiatives, one of them being the establishment of NITI Aayog. The NITI Aayog (National Institution for Transforming India) is a public policy think tank of the Government of India established to achieve the SDG’s with cooperative federalism by fostering the involvement of State governments of India in the economic policy-making process using a bottom-up approach. In addition to several initiatives in diverse sectors by NITI Aayog, it has recently released a report titled Renewables Integration in India, 2021 in collaboration with the Indian Economic Service (IES).

The report suggests ways for India to securely maximise the amount and value of solar and wind power in its electricity system. It also suggests policy, market and regulatory measures to incentivise renewables and ease their integration into the energy system with greater flexibility. The plan is to draw different models for renewable power in individual Indian states, rather than at the national level, since the challenges, solutions and priorities differ across the country. The Government of India plans to increase renewable electricity capacity to 175 GW by 2022 and to 450 GW by 2030, but even faster growth will be needed in the following decades to meet ongoing growth in demand and reach climate targets.

Looking at the the private sector, there is a noticeable shift with several industries switching to renewable energy sources, including sectors like Real estate, which embodies energy-efficient buildings, water and wastewater treatment as a selling point. In other sectors, efforts are being made to employ climate change mitigation technologies in consumer products.

The next decade will hopefully bring a revolutionary change in the production and employment of renewable energy in the country. Currently, India is not in the top countries producing/using renewable energy sources. However, given of its size and the dynamism of its economy, India has a key role to play in the world’s transition to a clean energy future.

Renewable Technology in India and challenges:

To address the challenges, the government needs to bring about changes at the policy level to offer tax incentives and easy financing options. Further ease barriers for technology transfer and create ecosystem that brings technology holder/ patent owner and entrepreneurs together and approprirate incentive provided to technology holder for sharing the technology and ‘trade secrets’ for working of the technology.

Is IP a barrier?

To scale up technology diffusion in renewable energy sector, questions have been raised as to whether IP protection poses a barrier in particular for developing economies. The argument being that IP rights can hamper the transfer of technologies, especially by raising costs, limiting access and putting countries with low institutional capacity at a disadvantage. Interestingly, the research has shown that role of patents for renewable energy technologies differs from that in other sectors (eg Pharmceuticals). Compared with many other industries, the renewable energy sector displays a higher degree of substitutability and competition. In fact, innovation in renewable technologies comes from incremental improvements to existing off-patent technologies, especially as they are adapted to local conditions. Thus, there is sufficient room in the market for competing technologies. On the other hand, a strong IP protection regime encourages business to invest in protection of technology, enter into licensing arrangement and invest in R&D locally. Further, the trade barriers in the form of tariff and non-tariff duties often inhibit transfer of technology making it unattractive for companies to invest in middle- and low-income countries. Therefore, the Indian government need to address duty imposed on products that are targeted towards building eco system for renewal products manufacturing. Towards this, the Indian government has recently launched Production Linked Incentive scheme ‘National Programme on High Efficiency Solar PV Modules’ for achieving manufacturing capacity of Giga Watt (GW) scale in High Efficiency Solar PV modules. It is widely believed this will attract investment by global players in manufacturing and resultantly transfer of technology.

With the international coordination, attractive government policies and participation of the private sector, hopefully there will be a green future.