In a recent decision, the Federal Circuit Court of Appeals ruled that design patents on Ford truck hoods and headlights are not invalid as functional articles, holding “the aesthetic appeal of a design to consumers is inadequate to render that design functional.” Automotive Body Parts Association v. Ford Global Technologies, LLC, No. 2018-1613 (Fed. Cir., July 23, 2019).

This case was brought by the Automotive Body Parts Association (ABPA), who asked the court to hold that the aesthetic appeal, and not the mechanical or utilitarian aspect, of a patent design may render it functional. The court declined to adopt the ABPA’s unique argument.

The designs at issue are below. 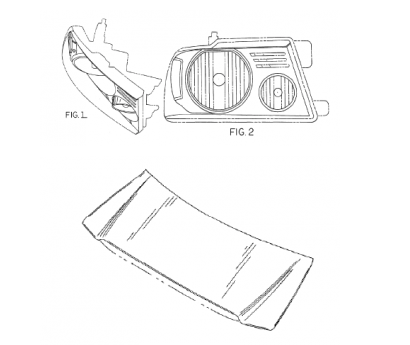 Ford testified that a design team, and not engineers, designed the ornamental features for the hood and headlights, and although engineers reviewed the final designs, there were no changes to the aesthetic designs based on engineering or functional requirements. The court stressed the importance of prior tests that looked at the presence or absence of alternative designs. Of course, there are a variety of hood and headlight designs available.

Overall, the court found the ABPA’s arguments that designs that derive commercial value from their aesthetic appeal are functional, would gut the principles of design patents: “The very thing . . . for which [the] patent is given is that which gives a peculiar and distinctive appearance, its aesthetic.” The commercial edge the design may give a patent owner is “exactly the type of market advantage manifestly contemplated by Congress in the laws authorizing design patents.”

This recent ruling from the Federal Circuit clarifies that design patent defendants should not focus on whether a design’s aesthetic appeal is functional, but rather focus on the functionality of the article of manufacture itself. Patent owners will do well to develop evidence early of invention by designers and not engineers, and of a variety of design options in the field to show the lack of functional necessity for the particular patented design.