The Ralph Lauren case and its iconic polo player trademark: the importance of choosing between design or trademark.

If the American firm Ralph Lauren is known for one thing, it is for its famous trademark logo, whose protection reached to Europe in 2004 when Ralph Lauren applied to the EUIPO to register the polo player’s design as an EU trademark for a wide range of products, including clothing and footwear.

The mark consisted (and consists) of a figurative sign consisting of a polo player on horseback holding up his stick. The mark was granted in November 2005.

Although in the United States, where the trademark originated, it was registered several years earlier, we must never forget the territoriality of trademarks, so that they will only be protected in those territories in which they are registered.

Well, on 23 February 2016, the Spanish company Style & Taste, dedicated to men’s fashion, filed an application to the EUIPO for the invalidity of the famous polo player of the New York trademark on the basis of a design registered by the Spanish company on 4 March 1997 by virtue – in Style & Taste’s opinion – of the similarity between the two signs. 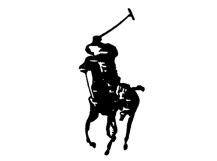 Image of the gurative mark registered by Ralph Lauren

Image of the design registered by Style & Taste

Without prejudice to the similarity or non-similarity between the two signs, the EUIPO rejected the application for invalidity on the grounds that the Spanish design had lapsed, decision appealed by Style & Taste, which was again rejected by the Cancellation Division of that body on the same grounds: the registration of the earlier design had lapsed on 22 May 2017.

Not satisfied with the ruling, the Spanish company appealed the EUIPO’s decision before the General Court of the European Union, again requesting a declaration of invalidity of the Ralph Lauren trademark on the basis of the similarity of the conflicting signs. However, it met with the same bad luck as in the previous proceedings, as the General Court of the EU declared, in its recent decision of 2 June 2021, that a trademark (in this case, an EU trademark) can only be declared invalid when the earlier right to which it refers still “exists”.

What are the grounds on which the GCEU decided in favor of Ralph Lauren and dismissed Style & Taste’s complaint?

A design lapses, and a trademark (generally) does not. Although there are nuances, since the trademark may lapse in the event that the owner does not renew the registration, or renounces it, or in the event of non-use of the trademark when it has not been put to real and effective use during a period of 5 years from the date of publication of the grant. The same applies where the trade mark has become commonplace, i.e. where the distinctive sign has become the usual designation of the product and/or service identified by the trade mark in question. However, neither of these things has happened to Ralph Lauren.

It is no secret that the maximum duration for the protection of a design for the purposes of Industrial Property rights in European territory is 25 years, whereas the protection of a trademark has no previously assigned expiry date. Once it has been registered for an initial maximum duration of 10 years, it can be extended for an unlimited period of time. In this particular case, this fundamental aspect of IP protection has played a dirty trick on the applicant company.

In this regard, one of the important points recalled by the General Court of the European Union in its decision is the reference to Article 52(2)(d) of Regulation No 40/94 (now Article 60(2)(d) of Regulation 2017/1001 on the European Union trade mark), which aims to protect the individual interests of the holders of earlier industrial property rights that conflict with later EU trade marks.

Thus, if an earlier trademark that applies for the invalidation of a later trademark, on the basis of that earlier trademark, but that trademark no longer enjoys EU protection on the date on which the EUIPO rules on the application, the invalidity must be rejected. This means that, at the time when a later trademark is declared invalid on the basis of the existence of an earlier design, that earlier design must be in force in order to enable its proprietor to assert it against third parties. This has not happened in the present case, since Style & Taste’s design, due to its expiry, has fallen into the public domain and, therefore, is susceptible of being used by the public.

This has meant that neither the EUIPO nor the EUAT have even been able to analyze the substantive issue as regards the alleged similarity of the trademarks, given the expiry of the earlier design and, therefore, given the failure to comply with the formal issues. This shows once again the importance of deadlines and the diligence that must exist when we are talking about industrial and intellectual property rights, which are one of the most powerful assets of companies.

Another thing would be to ask what would have happened if the earlier design had been in force at the time the decision was adopted, since, in that case, both the EUIPO and the EUAT would have had to rule on the merits of the case, with the consequent risk that this would entail for Ralph Lauren and its iconic brand.

All of this leads us to emphasize the importance of both the deadlines and the choice of the method by which to protect Industrial and Intellectual Property rights, as a good and correct diligence in the choice, processing and management throughout the life of these rights is essential to obtain maximum protection.