A Freshfields survey reveals that, between 2009 and 2018, DAX and MDAX companies announced a total of 2,002 investments through M&A with a disclosed total value of $486.4bn.

What are the DAX and MDAX indices?

Our recently published survey covers the constituent companies of the two indices as of 31 December 2018.

Where are the investments going?

There were 518 deals within Germany itself, 26 per cent of the total.

From a regional perspective, Europe was the most popular destination for German investments with 789 deals (39 per cent). North America was next with 342 (17 per cent).

By country, DAX companies were most active in Germany with 255 deals or 19 per cent of the total DAX deals. The United States was the second most popular market with 230 transactions (around 17 per cent).

By comparison, MDAX companies were more focused on their home market, doing 263 or 40 per cent of their transactions in Germany. Around 13 per cent (86) MDAX deals were in the United States.

Meanwhile, with 58 transactions and a disclosed total value of $4.2bn, India was the leading target country for M&A investments in the 15 major emerging economies we looked at, which also included countries such as Brazil, China and Russia. 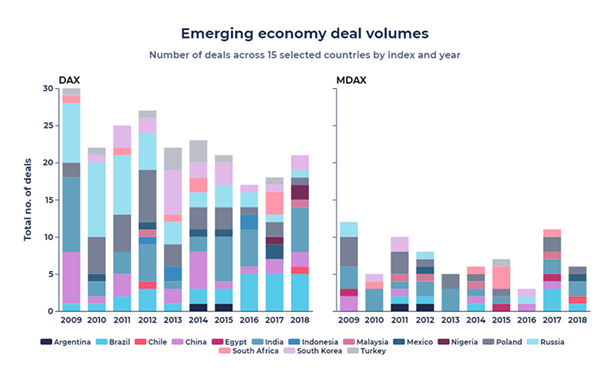 What kinds of asset are German companies buying?

The telecommunications, media and technology sector proved the most popular, with 475 deals, followed by manufacturing (340) and energy and natural resources (229).

This does not come as a surprise: disruptive technologies such as AI, robotics, big data and 3D printing are forcing established players to reshape their business models and accelerate their innovation efforts, and acquiring companies and founder teams in this sector is one way of doing so. Digital deals are of growing importance, with around 64 per cent of TMT deals targeting digital assets, such as software, and IT consulting and services.

Globally, the volume of M&A investments in the digital sector increased by 600 per cent between 2009 and 2017. This has been driven not only by companies upgrading their digital capabilities but also by a high level of interest in digital assets among financial investors. We expect this trend to continue in the near term.

At the same time, geopolitical factors, such as trade disputes between the United States and Europe and China, and the effects of a possible Brexit, continue to have an impact on the European and global M&A markets. The resulting uncertainties are causing companies and investors to act more cautiously than in the past, and M&A opportunities will require even more careful preparation and a forward-looking assessment of regulatory risks.

Explore more of our German M&A data and insights in our survey: Ten years of German deals – trends and outlook.