The table below provides a brief overview of Japan's Fifth Strategic Energy Plan released in 2018, and South Korea's Hydrogen Roadmap, summarized by the Hydrogen Electric Vehicle Consumer Association, released in 2019. 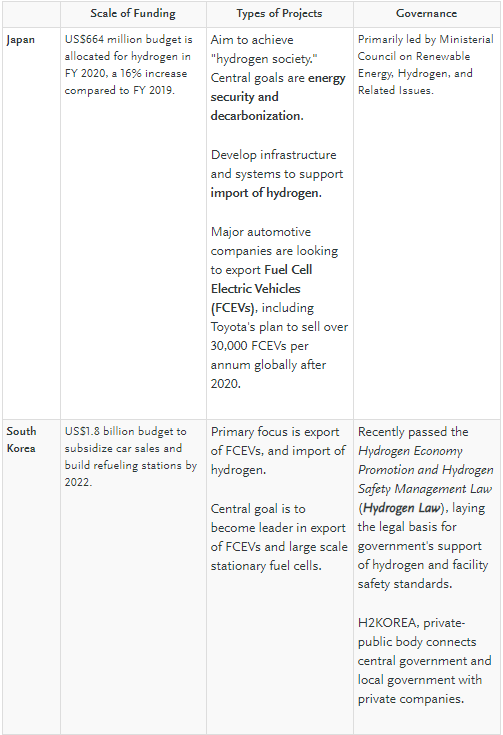 Both Japanese and South Korean national strategies are underpinned by the desire to secure stable supply of hydrogen as energy from diversified sources. At the same time, both countries see hydrogen as an opportunity to deploy domestic hydrogen technologies and realize decarbonization.

In Japan, policy makers are aware that Japanese geography poses numerous challenges for achieving decarbonization solely through renewable energy. As a means of realizing decarbonization while ensuring energy security, Japan aims to achieve an 80-percent reduction of domestic greenhouse gas (GHG) emissions through transitioning to a "hydrogen society" by 2030 and into 2050. Akin to Australia's "H2 Under $2" goal, Japan's strategy recognizes that reducing the costs associated with hydrogen is paramount to achieving the goal of decarbonization. The government has allocated US$664 million for R&D and technology deployment related to hydrogen, particularly with the aim of cost reduction through technological improvement.

South Korea shares similar concerns as Japan in terms of energy security, and hydrogen provides an additional energy supply. In anticipation of the global use of hydrogen as energy, South Korea also sees opportunities to become a leader in exporting FCEVs. In June 2018, the Ministry of Trade and Industry and Energy announced a US$1.8-billion budget for the establishment of public-private hydrogen vehicle industry cooperation. Hyundai, the country's biggest car manufacturer, announced plans to expand fuel cell production capacity to 700,000 units per year by 2030. In light of new hydrogen projects, the government anticipates that the country's hydrogen demand will increase from the current 2 million tons per annum to 5.26 million tons per annum by 2040, meaning new supply sources will be needed.

To address this increased demand, South Korea's strategy has focused on hydrogen imports. In June 2019, for example, South Korea signed a memorandum of understanding with Norway on shipbuilding for liquefied hydrogen transportation. South Korea also recently signed a letter of intent with Australia to identify and promote a mutually beneficial hydrogen import and export partnership.

Kawasaki's new tanker is instrumental in the Hydrogen Energy Supply Chain (HESC) pilot project between Japan and Australia. The HESC pilot project is the world's first fully integrated hydrogen supply chain: the project starts with the production of hydrogen from brown coal in Latrobe Valley, Victoria, Australia, and ultimately ships hydrogen for consumption in Japan.

In addition, Chiyoda Corporation developed a method for storing and shipping hydrogen using an organic chemical hydride method, and built a demonstration plant in Brunei. In May 2020, hydrogen produced in Brunei was successfully transported to Japan by Chiyoda in liquid form using this technology. These projects are bringing Japan closer to realizing international hydrogen supply chains.

In South Korea, chemical-focused conglomerate Hyosung Group signed a deal with Linde for a US$250 million project to build the world's largest liquid hydrogen plant by 2022, with a capacity of 13,000 Mt per annum. Also, Hanwha Energy has spent US$215 million since July 2018 to build a hydrogen-based fuel cell power plant with a capacity of 50 MW.

Further, South Korea's strategy emphasizes domestic hydrogen energy infrastructure, with H2 Pilot City Programs to be implemented in four cities across the nation. The majority of hydrogen production for this project originates from carbon-intensive hydrogen production, known as "grey hydrogen." In the long term, South Korea aims to transition to the use of carbon-free "green hydrogen." By 2040, South Korea seeks to meet 70 percent of its hydrogen demand with "green hydrogen" from domestic renewable sources or imports from abroad. These projects demonstrate South Korea's vision to use hydrogen as a major source for transportation and power generation.

The Japanese and South Korean strategies reflect three important points that may be echoed in Canada's upcoming hydrogen strategy.

Thank you to Claire Lingley, Summer Law Student, who greatly assisted in the preparation of this blog.