This article was originally published by World Trademark Review. It has been republished with permission and is part of a series of articles on WTR.

In the latest edition of our regular series identifying markets around the world that are reportedly notorious for the sale of counterfeit goods, we head to Russia.

According to a report in 2018, over $43 billion-worth of counterfeit goods are sold in Russia each year – with the figure increasing year by year. On top of that startling figure, it is estimated that 40% of all handbags, clothing and accessories sold in Russia are counterfeits, with 30% of consumers in the country's telling a survey that they have purchased fake goods in the past year. Russia has, then, "an enduring love for fakes", with an economic crisis and drop in disposable income pointed to as the reason for this.

For that reason, we reached out to Maria Aronikova, partner, and Sergey Meleshko, anti-counterfeiting specialist, from Gowling WLG in Moscow, and asked them to reveal the most effective ways to tackle fakes in Russia and highlight some of the physical marketplaces that brand holders should be aware of.

In a nutshell, what should a rights holder know about enforcing against counterfeit goods in Russia?

Russian legislation provides for civil, criminal and administrative liability for counterfeiting in Russia. Administrative cases are the most common in combatting the distribution of the counterfeit goods. Such cases can be initiated by the customs authorities or the police.

Customs, police and other law enforcement authorities may initiate an administrative case if they identify or suspect that goods are not legitimate. The case will be heard by the court in the administrative proceedings and the court will decide whether the goods are counterfeit or not. Customs maintain the Customs Intellectual Property Register, which contains information on the trademark or copyright owner, the licensee (or authorised distributor) in Russia, a description of the distinctive characteristics of genuine or counterfeit products, and the means for prompt communication with representatives of the trademark or copyright owner. Recording trademarks and copyrights within the register is part and parcel in the efficient combat of counterfeit goods.

Despite the efforts taken by the customs authorities, a significant amount of counterfeit goods still leak into the Russian market. Once they enter, counterfeit can be tracked either by the right holder or the police. If the rights holder identifies counterfeit goods, there are two options: 1) filing an application with the police reporting the infringement, or 2) filing a civil lawsuit with the court.

The police may initiate an administrative or criminal case depending on the amount of damages. 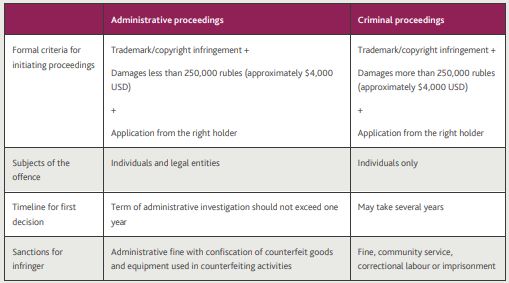 In respect to the civil action, the claim with the court can include an injunction, destruction of goods, and monetary compensation. Furthermore, in addition to the above-mentioned venues, it is also possible to file a complaint with the Federal Service for the Supervision of Consumer Rights and the Federal Antimonopoly Service for a violation of the law on unfair competition.

From a practical standpoint, it is crucially important to respond to a customs request in a timely fashion, given the fact that the counterfeited goods can be suspended up to seven or 10 days (depending on whether they are recorded on the customs register or not), with a further extension up to 10 days.

Seminars and trainings with the police and customs authorities proved to be an effective tool in strengthening the fight as well. For that reason, the effective fight against counterfeits in Russia is a two-way street that includes customs recordal, working with law enforcement agencies, and the proactive monitoring of the market by right holders.

Does landlord liability exist in Russia?

The landlord has a limited liability. It can be held liable for complicity if it can be proven that the landlord knew about the illegal activity of the tenant and had not taken the appropriate measures after being made aware of the situation (implying possible complicity and collusion).

Are there any local dedicated anti-counterfeiting associations or organizations in Russia?

Two organisations are worth mentioning. Firstly, the 'International Anti-Counterfeiting Association of Organisations Carrying out Activities to Counter Illegal Trafficking in Counterfeit Products' ("Anti-counterfeit") was founded by public organisations of Russia, Ukraine, Kazakhstan and Belarus in 2011. It provides informational, consultative, and methodological assistance and legal support to its members in order to protect their trademarks, company names, and other intellectual property objects.

Secondly, there is REACT, a non-profit organisation founded in the Netherlands in 1991. With over 29 years' experience fighting counterfeit trade all over the globe, including in Russia, its main activities are offline and online markets monitoring and customs control.

Counterfeit hotspots you should know in Russia:

Major counterfeit hubs are found throughout Russia, with many found in capital city Moscow.

Location: An enormous indoor trading center with thousands of stalls selling a variety of goods in south-east Moscow. For more than 20 years, it has been one of the largest wholesale and retail trade centers in Russia, with a total area of more than 40 hectares (map link) (official website).

Fakes known to be sold there: The main categories are clothes and shoes, children's goods, bags, hunting and fishing goods, travel items, and pet supplies, as well as flowers, seeds, seedlings, and garden equipment.

Challenges to enforcement at this marketplace: Corruption, organised and violent merchants and unmarked stores with complicated access. The main stock of counterfeit goods can be located on other premises.

Fakes known to be sold there: Food, alcohol, and tobacco.

Challenges of enforcement at this marketplace: Like with the market above, there are issues of corruption and violent merchants, unmarked stores with complicated access, with the main stock of counterfeit goods are located on another premises.

Fakes known to be sold there: Clothes and shoes, children's goods, bags, food, and tobacco.

Challenges of enforcement at this marketplace: Yet again, corruption and organised merchants are a problem, along with unmarked stores with complicated access.

Location: A sprawling indoor-outdoor bazaar in the south-west of the country, a few hundred miles north of the Georgia border(map link) (official website)

Challenges of enforcement at this marketplace: Generally, the main stock of counterfeit goods are located on other premises

Fakes known to be sold there: Electronics, software, computer games, music, and accessories.

Challenges of enforcement at this marketplace: More corruption, more organised and violent merchants, and unmarked stores with complicated access.