The Trump Administration on November 15, 2019, released a final rule (the Final Rule) requiring hospitals to publicly disclose hospital charges, including negotiated prices with third-party payers by January 1, 2021. More specifically, the Centers for Medicare and Medicaid Services (CMS) is adding a set of new regulations that establish requirements for hospitals to publicly disclose their charges, penalties for non-compliance and details on the specific methods and elements for disclosure.

CMS originally proposed these requirements in the Calendar Year 2020 Medicare Hospital Outpatient Prospective Payment System Proposed Rule (the Proposed Rule), which we discussed in a prior On the Subject titled “Proposed OPPS Changes for 2020: A review of Four Key Proposals.” Despite significant opposition to the Proposed Rule from the hospital stakeholder community, the Final Rule is materially similar to the Proposed Rule, with only minimal changes. Other than the one-year delay in implementation, the primary difference between the Proposed Rule and Final Rule is the option for hospitals to comply with the disclosure requirements through development of an internet-based “price estimator tool” to allow consumers real-time access to price estimates of identified hospital services.

One other notable development is that the Administration simultaneously posted a proposed rule that would apply similar requirements on employer-based group health plans and health insurance issuers whereby such entities would be required to disclose price and cost-sharing information to participants, beneficiaries and enrollees up-front. This additional proposed rule is intended to be responsive to a key hospital argument that payers are better positioned to provide actionable price comparison information to consumers, because actual patient liability is driven more by plan- and patient-specific liabilities than hospital negotiated charges.

It estimated that there are approximately 6,002 hospitals operating within the United States that would become subject to the new disclosure requirements.

This article outlines key considerations for hospitals and other stakeholders in connection with the Final Rule and its requirements, as well as a chart detailing the specific requirements as set forth in the Proposed Rule and as finalized in the Final Rule.

Compliance with the Final Rule will require many hospitals and hospital systems to devote extensive resources to determine particular hospitals’ “standard charges,” which include not only the hospital’s chargemaster, but also payer-specific charges, discounted cash prices (to the extent such prices exist), minimum negotiated charges and the maximum negotiated charges, not only for individual items and services, but also for service packages in cases where standard charges exist. Moreover, hospitals will be required to identify the relevant universe of 300 “shoppable” services at each hospital based on billing data, as well as the ancillary services that the hospital “customarily” provides with the shoppable services.

These tasks can be expected to consume significant resources from hospitals as they:

Operational compliance with the Final Rule can be expected to involve a number of nuanced analyses and determinations across an array of individuals across hospital departments.

The Final Rule’s “internet-based price estimator tool” option for hospitals may relieve some of the Final Rule’s burden for hospitals that have already established qualifying tools, or to the extent developing such a tool would be less burdensome than otherwise meeting the requirements of making public the hospital’s standard charges for selected shoppable services in a consumer-friendly manner. However, even hospitals that offer a qualifying internet-based price estimator tool will be required to make public all standard charges for all hospital items and services online.

Finally, hospitals expecting to incur significant costs to come into, and maintain, compliance with the Final Rule’s requirements may consider those costs in the context of the size of the Civil Monetary Penalties for noncompliance, which is capped at $300 per day and would total $109,500 in penalties over the course of the year. In the Final Rule, CMS acknowledged comments expressing concern that some hospitals may prefer to forgo meeting the Final Rule’s disclosure requirements, and instead face compliance actions including a $300 maximum daily penalty. Hospitals considering such an option would want to consider the possibility of CMS increasing the penalty in future rulemaking (a possibility CMS expressly contemplated in the Final Rule), potential reputational implications of noncompliance, and market dynamics if certain hospitals are silent as to published rates while other hospitals have published rates. Intentional noncompliance with federal law may also have implications in a variety of other contexts, such as accreditation and certifications of compliance in various settings and transactional representations and warranties regarding compliance with federal law, among others

Although the potential market dynamics of the Final Rule and public accessibility to pricing information are not expected to materialize until after hospitals have come into compliance with the Final Rule and patients begin reviewing the data to a meaningful extent, hospitals may benefit by beginning to anticipate these market dynamics well before standard charges are published. Anticipating the effects of the pricing information on the market for hospital services, however, is likely a task for consultants and economists, rather than individual hospitals or systems.

As CMS acknowledged in the Proposed and Final Rules, any market effects are largely unknown at this time and will likely vary based on a variety of local and regional factors, such as the proximity of hospitals providing similar services, patients’ beliefs regarding the quality of care provided at various hospitals within a reasonable proximity, and the disparity of disclosed standard charges at various hospitals and in particular specialties. Whereas rural hospitals that are relatively distant from other hospitals with similar reputations and charges may experience little market impact from the Final Rule’s disclosure requirements, urban hospitals in close proximity to substitute competitors with different reputations and charges may experience greater market impact. Hospitals anticipating a potential adverse effect may consider strategies to shift the potential trajectory

Because the Final Rule will require separately licensed hospitals within a single health system to comply with the reporting requirements, differing standard charges at particular hospitals may result in intra-health system dynamics, such that patients may prefer to receive services at one system hospital as opposed to another based on the difference in standard charges between the hospitals. Similarly, because the Final Rule will require hospitals to include ancillary services among the “shoppable” services with disclosed standard charges, differences in the ancillary services customarily provided with shoppable services furnished at one hospital as opposed to another hospital in a health system may similar result in patient preferences to be seen at one system hospital or another. Similarly, because standard charges will distinguish between inpatient and outpatient procedures, patients may be more inclined to have procedures furnished in lower-charge settings (e.g., outpatient settings) as opposed to typically higher-charge settings (e.g., inpatient settings)

Larger health systems preparing for disclosure of standard charges should consider how differing standard charges and customarily furnished ancillary services at various hospitals may impact patient perceptions and preferences, and consider pricing or operational strategies that may shape the potential impact of the Final Rule on the health system’s internal dynamics.

The Final Rule’s effect on third-party payer relationships is likely to be defined by the facts and circumstances of particular localities and regions, including the number of proximate hospitals and their respective reputations, services, patient populations and other factors.

To the extent the Final Rule’s transparency requirements may influence patient choice among hospitals, differentials in standard charges for categories of procedures from one hospital to another may result in shifting patient demographics and procedure utilization. For example, hospitals with lower charges for certain types of services may attract patients with diagnoses that typically receive those types of services. Utilization of procedures with relatively high standard charges across all reasonably proximate hospitals may decrease as patients may forgo certain relatively high-charge procedures, particularly in cases where another, lower-charge procedure may be available.

Finally, hospitals should consider the potential impact that anticipated litigation may have on the Final Rule and its various requirements. The rule claims that CMS has authority based on a provision in the Public Health Services Act requiring each “hospital” operating within the United States to each year establish, update and make public a list of the hospital’s “standard charges” for “items and services” provided by the hospital. Following publication of the Proposed Rule, a number of hospitals publicly indicated an intent to sue CMS to block implementation of the requirements if finalized as proposed. The opposition to the requirements and possible legal theories that might be used in litigation were reflected in the comments to the Proposed Rule. Commenters explained that negotiated rates are proprietary, and requiring their disclosure would infringe upon intellectual property rights recognized by Congress through the Defend Trade Secrets Act of 2016. Other commenters indicated that disclosure of payer-specific negotiated charges was limited under the Freedom of Information Act (FOIA), which protects trade secrets and confidential commercial or financial information against broad public disclosure. Other comments asserted that the requirement to disclose payer-specific negotiated charges would violate the First Amendment by compelling speech. Other commenters still noted that some third-party payer contracts prohibit disclosure of the negotiated rates.

In the Final Rule, CMS clearly contemplates litigation (e.g., in CMS’s discussion of de-identified minimum negotiated charges, it noted that it intends all five definitions of “standard charges” to be “severable,” such that if a court were to invalidate the inclusion of an individual definition, the remaining definitions would remain defined as types of standard charges) and acknowledges each of these legal challenges, but recognizes it continues to believe it has the authority to promulgate the requirements. On the day the Final Rule was released, the American Hospital Association, Association of American Medical Colleges, Children’s Hospital Association and Federal of American Hospitals issued a statement indicating they would soon join with member hospitals to file a legal challenge to the rule on grounds including that it exceeds the Administration’s authority. The January 1, 2021, effective date may delay litigation until that time, as courts often dismiss litigation as not ripe in advance of implementation.

II. OVERVIEW OF THE FINAL RULE 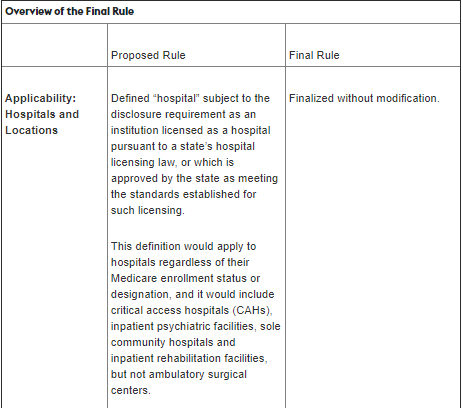 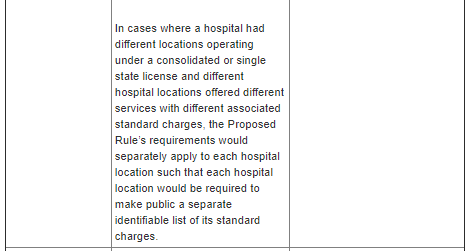 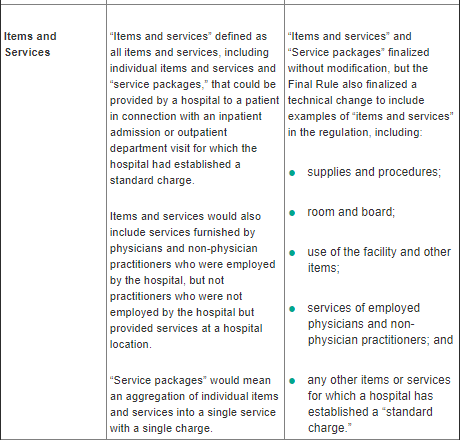 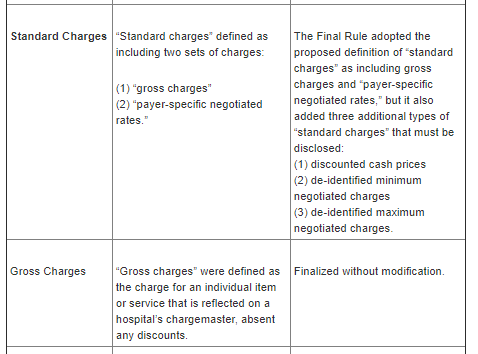 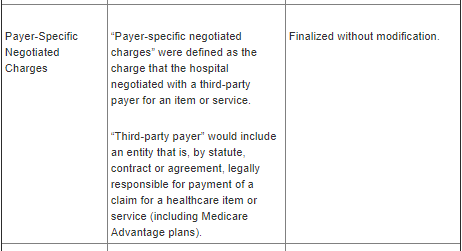 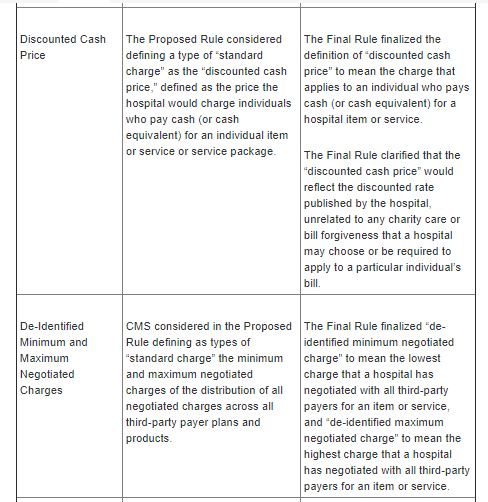 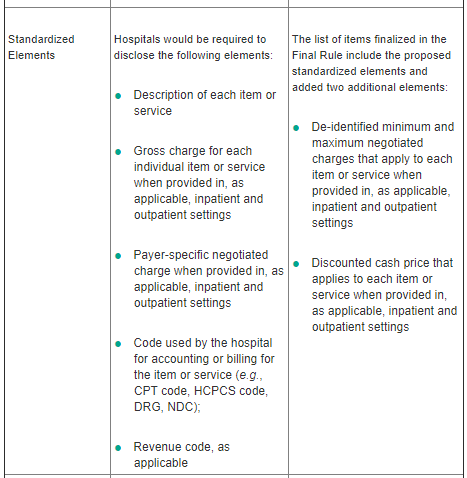 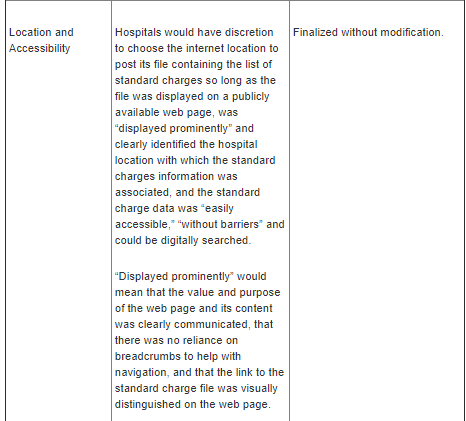 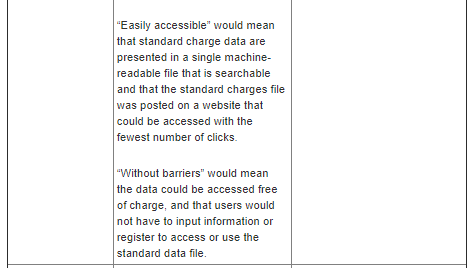 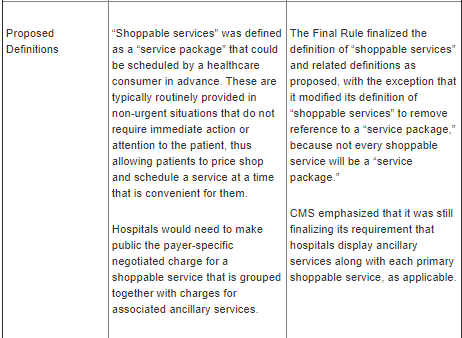 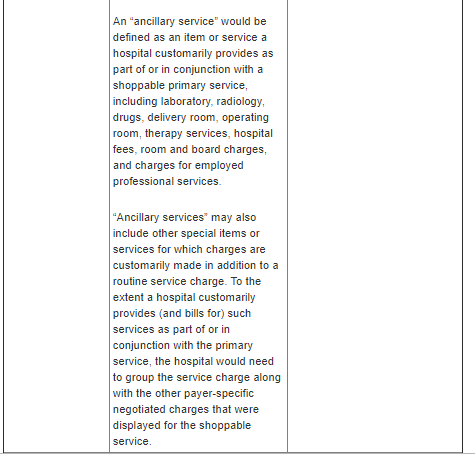 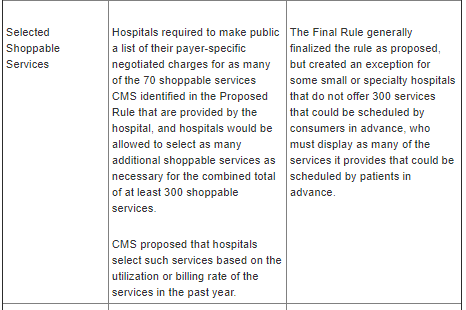 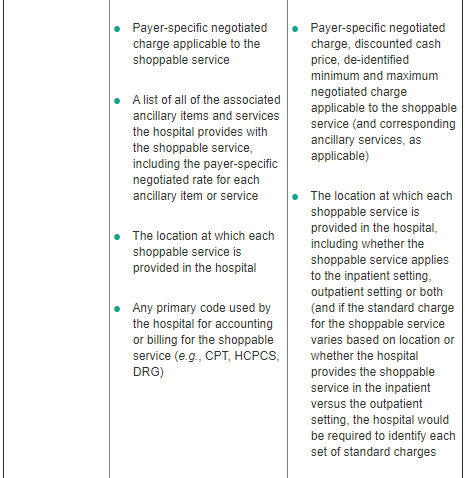 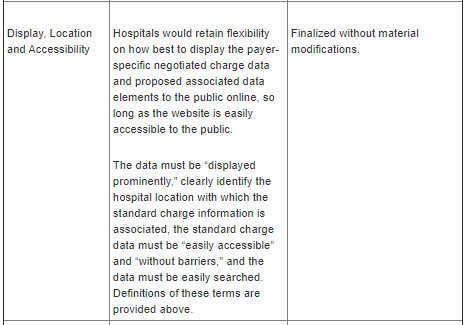 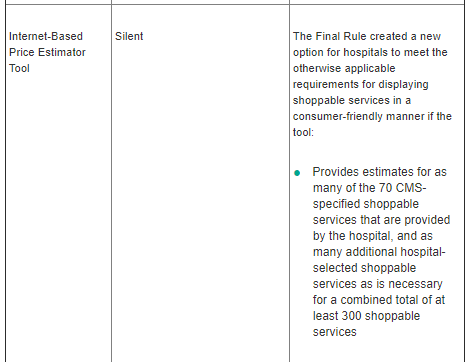 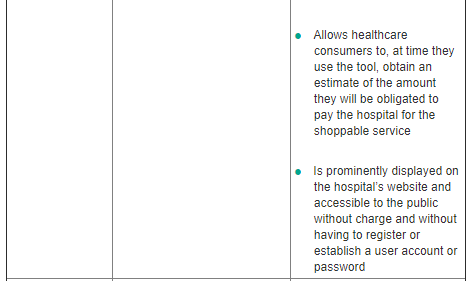