The original article was published by the American environmental boutique law firm Beveridge and Diamond with authors Eric Christensen, Brook Detterman, David Friedland, Jenny Leech and Zach Pilchen; we have added boxes of our own to explain or contextualize certain particularities of the American system that may not be familiar to a Canadian audience.

On June 30, 2022, the U.S. Supreme Court issued its decision in West Virginia v. EPA, 597 U.S. __, 2022 WL 2347278 (June 30, 2022), a case involving the Obama Administration’s Clean Power Plan (CPP) and the Trump Administration’s Affordable Clean Energy (ACE) Rule. Applying the “major questions” doctrine, the Court held that EPA exceeded its statutory authority when promulgating the CPP. This decision has implications for the Biden Administration’s planned re-work and reissuance of the CPP and other options for reducing greenhouse gas (GHG) emissions from the electric power and other sectors. It also carries implications outside the environmental realm, providing litigants a powerful new administrative law precedent to challenge agency rules. 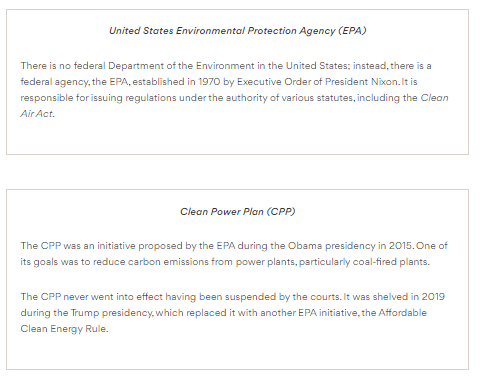 Key Takeaways and Issues to Watch

1. “Major questions” doctrine. The most significant takeaway of the opinion is the Court’s elaboration and application of the “major questions” doctrine, as a limit on federal agency regulatory authority. Chief Justice Roberts’ majority opinion held that in “certain extraordinary cases” where an agency asserts broad authority of “economic and political significance,” courts should look for a clear statement of congressional authorization before green-lighting the action. Based on the “major questions” doctrine, the Court rejected the CPP’s partial reliance on generation shifting (from coal-fired power plants to natural gas or renewable electricity generation) as a component of the “best system of emission reduction” (BSER) for reducing carbon dioxide from coal-fired power plants.

The Court held that Clean Air Act Section 111(d), a rarely-used statutory provision, was not sufficient to support a rule making that “restructure[ed] the Nation’s overall mix of electricity generation….” Because the Court determined this result would carry consequences of economic and political significance, the Court found the rule triggered the “major questions” doctrine. The Court reiterated that although Section 111(d) authorizes EPA to establish emission guidelines for existing major sources of air pollution based on BSER, the Agency could not do so using such transformative measures.

This decision represents the Supreme Court’s first formal assertion of the “major questions” doctrine, applicable when an agency claims broad authority based on new interpretations of older statutes or statutes in which the grant of authority is not explicitly stated. Although this was not the first Supreme Court case employing this logic, this was the first case where the Court formally used the phrase “major questions” doctrine. Other cases the Court pointed to include a 2000 case rejecting the asserted authority of the Food and Drug Administration (FDA) to regulate tobacco products, like cigarettes, as drug-delivery “devices,” and more recent cases from this Supreme Court term concerning the authority of the Occupational Safety and Health Administration and the Centers for Disease Control and Prevention (CDC) to apply long-extant legal authorities in the context of COVID-19.

2. Chevron deference doctrine. The Court does not strike down Chevron as some parties had predicted or sought. That doctrine—requiring courts to defer to an agency’s reasonable construction of an ambiguous statute it is charged with administering—survives for now. Indeed, the majority opinion did not even cite Chevron deference.

3. Biden EPA. This decision immediately affects the scope of the Biden Administration’s approach to regulating power sector GHG emissions. The Administration has said that it wants to start these rules from a clean slate.

a. On-site measures. As noted in the decision, the Administration may be more likely to consider on-site measures as the BSER. Such options might include partial carbon capture and storage (CCS) or natural gas co-firing. The Obama EPA had declined to use those options for existing sources because it believed generation shifting was a less expensive way for industry to comply. But EPA had used partial carbon capture to set the limits for new sources, so it may review that issue now. Since the CPP’s issuance, the IRS Section 45Q tax credit for CCS and commercialization of CCS technologies that did not exist when the CPP was drafted may also affect the EPA’s approach now.

b. Generation shifting off the table. At least for setting the stringency of BSER, EPA will not be able to rely on generation-shifting measures. Advances in CCS technologies and the Section 45Q tax credit may also affect how EPA defines BSER for coal-fired plants in particular.

d. Other climate authorities will likely get a more intense look. The decision may also likely cause the Biden EPA to consider other, more clearly established GHG sources or authorities to seek additional GHG emissions reductions (e.g., mobile sources, HFCs).

4. Congressional action remains key. The Court’s decision underscores that certain rule makings will need to rely on clear legislative authority to withstand legal challenges. Notably, the decision does not divest Congress from the ability to delegate “major questions” like this to federal agencies; it only requires that such delegations be clearly stated. Congress retains authority to act in any number of ways on climate change—including with economy-wide emissions programs (as it considered during the first Obama term), or by drafting clearer EPA authority—but with a narrowly-divided House and Senate, these actions seem unlikely.

5. Power sector practical effects. The practical outcome for the power sector is limited. That sector, in many respects, has already decarbonized at a rate faster than provided for by the CPP, largely for economic reasons.

6. States. This decision will likely encourage some states to use their authority to regulate GHG emissions, given the narrowed scope of EPA’s authority.

7. Future challenges. Expect litigants to rely heavily on the West Virginia decision in other rule making challenges going forward, whenever agencies act under existing authorities in a way that, in the Chief Justice’s words, “raises an eyebrow.” This may include not only EPA regulatory efforts to address modern environmental challenges, but actions of other federal agencies such as efforts by the Federal Communications Commission to regulate internet service providers to impose net neutrality, or efforts by the Securities and Exchange Commission to establish ESG disclosure requirements. Litigants will have a powerful tool to challenge those rules if they can persuasively phrase the question in “major question” terms.