The 2019 legislative session began with the inauguration of a new governor and the members of the 101st General Assembly. With a large number of retirements and turnover in the 2018 elections, there were a record over three dozen freshmen in the legislature this year. The 2018 mid-term election backlash that delivered the US House to the Democrats also allowed the party to retake supermajority status in the state House and expand their supermajority in the state Senate.

The inauguration returned Springfield to unified Democratic control of the House, Senate, and Governor’s mansion. Democrats expanded their numbers to 74 and 40 in the House and Senate, respectively. In his speech upon taking office as the state’s 43rd governor, Democrat JB Pritzker, a political newcomer and billionaire heir to the Hyatt hotel fortune, pledged a leadership style that abandoned “single-minded, arrogant notions”, vowing that the state’s failure to make tough choices and “abdication of responsibility must end.”

Pritzker aimed to set a new tone in Springfield, establishing a clear break from the partisan warfare and political stalemate that characterized the entirety of his predecessor’s tenure. Former governor Bruce Rauner’s tenure was defined by his failed attempt to get the legislature to pass his ideological reforms and the two-year budget standoff that resulted from it.

With unified control, Democrats were able to act on a number of pent-up progressive priorities, including: a $15 minimum wage; allowing voters to decide on a graduated state income tax plan; and legalization of marijuana and expungement of 800,000 records for low-level possession. In addition to these more liberal items, the General Assembly expanded casino and video gaming, along with the legalization of sports betting, and passed a capital bill for the first time in a decade. In sum, this session of the General Assembly likely holds the title as one of the most consequential for the state in decades.

Governor Pritzker established an ambitious goal at the start of the legislative session: passage of a minimum wage increase by the time of his budget address in mid-February. In the span of only a few weeks, this was achieved with only Democratic support. The state’s minimum wage is currently $8.25 per hour and gradually increases over a six-year ramp to $15 an hour in 2025. Under this law, SB 1, the minimum wage ramp for adult employees is as follows:

There is a separate minimum wage scale for employees under 18 who work more than 650 hours going up to $13 an hour by 2025. Included in the legislation is a credit against withholding taxes for small businesses – those with 50 or fewer full-time employees – that gets phased out for the smallest employers at the end of 2027.

Following Pritzker’s early victory on minimum wage, the legislature did not act on many significant items until the last few weeks in May. However, after some last-minute drama that forced session to go into one weekend of overtime, the legislature passed a bipartisan, balanced budget that also pays down some of the state’s accumulated bill backlog.

SB 262 is the appropriations bill for Fiscal Year (FY) 2020 and supplemental appropriations bill for FY19. For FY 20, including all funds, it is an $88.7 billion budget, with approximately $40B in appropriations from the General Revenue Fund (GRF). This is an increase of more than $1B from last year’s enacted spending level. Among the items in the appropriations bill are: $8.8B for P-12 education, which is an increase of more than $495M from last year; $375M increase in funding through the state’s new Evidence-Based Funding formula, which exceeds the statutorily-required minimum increase; $1.9B for higher education, including a 5% funding increase for universities and colleges; and a $450M for needs-based MAP Grants.

The appropriations bill also provides a number of increases for social and human services agencies, including a 3.5% rate increase for service providers to those with developmental disabilities and increased funding for domestic violence and homeless youth shelters. Part of the rate increases are meant to help these agencies address the cost of the increased minimum wage.

Furthermore, the budget includes over $1.2 billion to pay down the state’s bill backlog, which currently stands at $6.43 billion. Addressing this, and the state’s $130B unfunded pension liability, remains a significant challenge for Pritzker and the legislature in the coming years.

For FY19, the bill provides for ~$582M in supplemental appropriations, the majority of which ($335M) is for increased costs associated with step wage increases for state workers that were withheld during previous FYs.

SB 1814 is the associated budget implementation (BIMP) bill for FY20. Its key items include: restoration of the 6% salary spiking cap for the Teachers’ Retirement System (which was lowered to 3% last year); maintenance of the 1.5% local tax collection handling fee, which impacts locally-imposed, state-collected revenues; and maintenance of the 5% proration of Local Government Distributive Funds (LGDF) and public transit monies. In addition, the BIMP contains a new distribution formula for aviation fuel sales tax, which is required to bring the state into compliance with a Federal Aviation Administration rule that such money must only be used for airport-related purposes.

Gov. J.B. Pritzker signed a $40 billion state budget into law. Here's a look at what your tax dollars are buying – Chicago Tribune, June 6, 2019

One of the central themes of Governor Pritzker’s campaign was a constitutional amendment abolishing Illinois’s constitutionally-mandated flat income tax. SJRCA 1 would eliminate this requirement and replace it with the following language that “the General Assembly shall provide by law for the rate or rates of any tax on or measured by income imposed by the State.” The new language maintains the limitation on corporate income tax rates of 8 to 5, but says the highest rate on corporations shall not exceed the highest rate on individuals by that ratio. Despite pressure from outside groups, all present Democrats in both chambers voted in favor of the constitutional amendment. There was no Republican support for the measure. 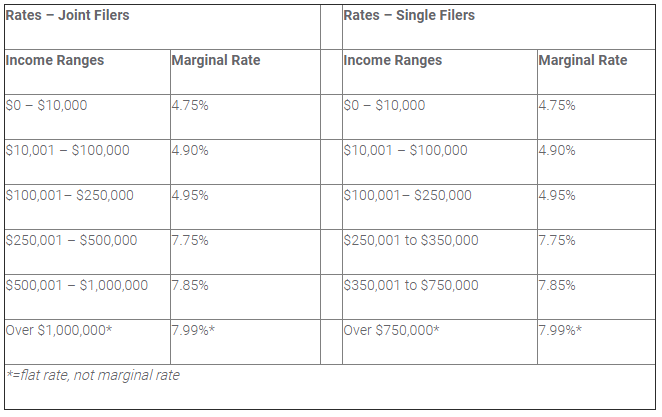 When Pritzker released his proposed rate plan in March, a dueling ad war began between outside groups supporting and opposing the tax. Pritzker, who has already shown his willingness to use his wealth to support his political goals, is using a 501(c) 4 – Think Big Illinois – to support his initiatives. The business groups opposing the tax are doing so through an organization called Ideas Illinois, which is led by Greg Baise, a former head of the Illinois Manufacturers’ Association. Both groups ran substantial ad buys when legislators were considering the amendment, which is likely to be dwarfed by the tens of millions of dollars in ads as the time approaches for voters to decide the question.The graduated income tax question will be on the November 2020 ballot. To ratify the amendment, it needs to be supported by at least 60% of those voting on the question in particular or a by majority of those voting in the election. Depending on how many people choose not to vote on the amendment, one method of ratification is easier to achieve than the other.

Adding to the list of significant accomplishments during his first session, Governor Pritzker and the legislature approved a six-year, $45 billion capital bill to invest in the state’s infrastructure – roads, bridges, mass transit, building maintenance, and other local projects.

The plan is the state’s first in a decade and provides money for both horizontal (roads and bridges) and vertical (buildings) infrastructure assets. Of the $45B, the majority (74% or $33B) of the money goes to transportation.

See the table below for highlights on the distribution of funds.

The plan is primarily funded through a doubling of the state’s gas tax, an increase in vehicle registration and other similar fees, and an expansion of gambling. Starting July 1, 2019, the state’s Motor Fuel Tax will increase by $0.18 to $0.38 per gallon.

Gaming expansion was three-pronged: legalization of sports betting; authorization of six additional casinos, including in Lake County, Rockford, and Chicago; and an increase in the number of video gaming terminals allowed per location and the amount bet at each.

Detailed project lists for the capital plan are not yet publically available as of this writing.

Anti-Harassment and Discrimination Training and Disclosure

Last year, House Speaker Michael Madigan convened a non-partisan panel to address issues of equality and make recommendations to combat harassment in politics and government. The panel released its report in September 2018, and this year the General Assembly passed an omnibus anti-harassment and ethics bill that strengthens protections in civil rights and employment law for public and private sector workers.

The major provisions in the legislation are as follows:

SB 75 passed both chambers unanimously and was sent to the Governor on June 10th. He has 60 days to act on the bill.

House Bill 1438 (Cassidy) legalizes the recreational use of marijuana in Illinois for anyone over the age of 21. By January 2020, medical marijuana dispensaries will be able to sell marijuana for recreational use, and the State will grant more licenses to other companies by mid-2020. Illinoisans will be able to legally possess up to 30 grams of cannabis flower or 5 grams of cannabis concentrate, and Illinois visitors can possess up to half of that amount. It will be legal to smoke in one’s home and in certain private locations, but smoking in any public place or in a motor vehicle is prohibited. Growing marijuana at one’s home is also prohibited.

The taxation scheme varies depending on the type of product. Purchases of cannabis flower or products with less than 35% THC have a 10% sales tax. Cannabis-infused products such as edibles come with a 20% tax. Products with a THC concentration higher than 35% come with a 25% tax, and municipalities and counties will be able to levy additional local sales taxes. There is also a 7% gross receipts tax on the sale of marijuana from cultivators to dispensaries. The bill also offers some clemency for people convicted of marijuana possession: Anyone convicted for possession of under 30 grams will have their records referred to the state’s Prisoner Review Board and then to Gov. Pritzker for a pardon, as long as the conviction was not associated with a violent crime.

A major campaign issue of 2018, marijuana legalization was considered a big win for Illinois Democrats—though it had some bipartisan support. After passing both chambers of the legislature, HB 1438 was sent to the Governor on June 6. Gov. Pritzker has indicated he will sign it into law.

Senate Bill 2023 (Morgan / Fine) as amended by House Floor Amendment 1 makes the pilot medical marijuana program permanent. In addition, it adds a number of eligible medical conditions to the program. SB 2023 passed both chambers with strong bipartisan support and was sent to the Governor for his approval.