The minimum rate of wages payable to employees engaged in S&E consists of basic rate of wages along with cost of living allowance / variable dearness allowance (VDA) notified by the State Government from time to time. As per the notification dated 4 February 2019 issued by office of the Labour Commissioner – Maharashtra (Labour Commissioner), VDA prescribed for employees engaged in S&E was INR 4,104 per month, which was applicable from 1 January 2019 to 30 June 2019. 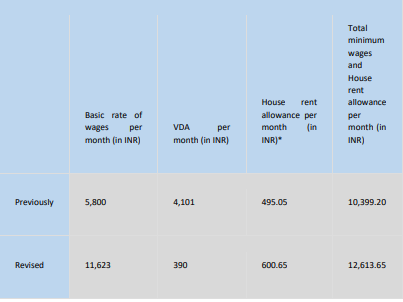 *(payable at the rate of 5% of the wages (i.e. basic salary along with dearness allowance))

In effect, the difference between the revised and previously payable minimum wages along with house rent allowance, to a skilled person employed in S&E in Zone I of is only INR 2,214.

While employees would have expected a significant increase in their gross wages owing to the revision of basic rate of wages, the drastic reduction in VDA is a disappointing move, against the interests of the employees. On the other hand, employers now get a breather as the expected increase in financial burden has significantly reduced owing to reduction of VDA.

“The content of this document do not necessarily reflect the views / position of Khaitan & Co but remain solely those of the author(s). For any further queries or follow up please contact Khaitan & Co at  [email protected]”