The Hart-Scott-Rodino (HSR) Act requires parties to transactions that meet certain thresholds to notify the Department of Justice (DOJ) and Federal Trade Commission (FTC) and observe a waiting period prior to closing, unless certain exemptions apply. These thresholds are adjusted annually.  On January 29, 2018, the FTC announced revised HSR thresholds, which will be effective sometime in late February or very early March 2018, 30 days after they are published in the Federal Register. The revised thresholds are:  Size-of-Transaction Test: The threshold used in the size-of-transaction test will increase from $80.8 million to $84.4 million.  Size-of-Persons Test: The sales and assets thresholds used in the size-of-persons test will increase from $16.2 million to $16.9 million and from $161.5 million to $168.8 million, respectively. The size-of-transaction threshold above which the size-of-persons test becomes irrelevant willincrease from $323.0 million to $337.6 million.  Greater Notification Thresholds: These thresholds, which apply to subsequent acquisitions of voting securities made within five years after expiration or termination of the waiting period of a previous HSR filing for an acquisition of voting securities from the same issuer, were revised as follows: 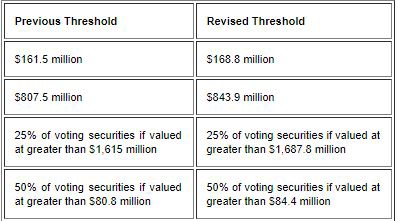 Filing Fees: Filing fee thresholds based upon the value of assets or voting securities being acquired will be revised as follows: