For most patent attorneys working in life sciences, the BIO International Convention is a regular if not essential event in our calendars. IP professionals from all over the globe make the pilgrimage to the ‘mecca’ of life science events to meet with fellow colleagues and clients, as well as to hear about new technologies and attend education sessions on various topics including IP and commercialization. Of course, the conference is much broader than IP, but for the non-US IP professionals, BIO is a great opportunity to discuss all-important changes in US patent law and practice with our US colleagues.

Patent Eligibility in the USA

A significant point of discussion at BIO, as it has been over the last few years, was the assessment of patent eligibility of inventions directed to diagnostic methods in the US as examined under section 101 of title 35 of the United States Code (‘35 USC § 101’). Following several key US Court cases, companies developing medical diagnostics are facing what seems to be growing uncertainty on return on investment. The fact is that protecting medical diagnostics in the US is proving difficult, or at best the patents obtained have claims of narrow scope that may not be commercially valuable.

The frustration of the legal profession (both US and foreign) as to the ‘evolution of bad law’ by the US Supreme Court, and the USPTO’s inconsistent examination of patent eligibility for diagnostic method patents, was palpable. The resounding commentary from our US colleagues was that the only way to fix the situation for diagnostics will be for the US legislature to amend section 101. A panel discussion on this ‘fix’ featured on the Bio Convention program with review of the American Bar Association [PDF 349KB], the American Intellectual Property Law Association [PDF 609KB] and the Intellectual Property Owner’s Association [PDF 474KB] draft proposals for amending section 101.

While differing in approaches, the amendments proposed by these organisations would seemingly simplify the analysis of patent eligibility, and do away with the convoluted analysis of eligibility currently applied by US Courts and the USPTO to claims directed to:

Until a ‘fix’ becomes reality, it was heartening to learn that our US and foreign colleagues have adopted similar approaches to prosecuting US patent applications with claims attracting ‘101’ objections. In short, where no clear path to allowance can be obtained by following the USPTO’s guidance on subject matter eligibility, filing a continuation and/or exploiting time delays by filing an appeal are approaches that can be taken (albeit at varying costs) to maintain pendency so as to continue prosecution until there is a change in law.

Towards the end of July 2017, the USPTO issued further documents providing guidance on patent eligibility (i.e. interpreting and applying 35 USC § 101). These are:

The Report provides a useful summary of US law on subject matter eligibility, as well as views from the public (both supportive and critical) of the US Supreme Court’s decisions in this area. Pitched as an unbiased document, it is interesting to note in the conclusion that a majority of the public are calling for legislative change to address section 101 issues, even though the nature of amendments required for change are far from settled (as discussed above). From our recent discussions with US colleagues, providing certainty in the area of subject matter eligibility through legislative change seems quite low on the agenda of the current US government.

Change in the short term is therefore unlikely.

Following our trip to BIO, we were interested to determine whether we could begin to see the impact of 101 eligibility issues on grant rates for US patents. While some published statistics on this topic are available (e.g. revealing that the number of 101 rejections has increased by 200%-300% in some life science areas since the US Supreme Court’s 2010 Bilski decision [PDF 416KB]), we were particularly interested in grant rates for patents with claims specific to diagnostic methods.

Our strategy for identifying such patents involved using a combination of patent classification codes (i.e. IPC codes used by the OECD [PDF 70KB] to broadly classify ‘biotechnology’ patents) and keywords (i.e. to identify specific words in patent claims such as ‘diagnose’, ‘detect’, ‘assess’ or ‘screen’ etc, or grammatical variations thereof, used in connection with the words ‘process’ or ‘method’). The results are shown below: 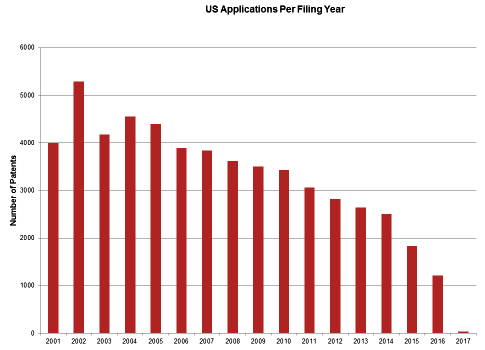 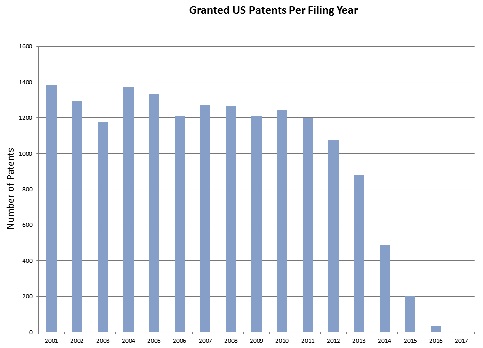 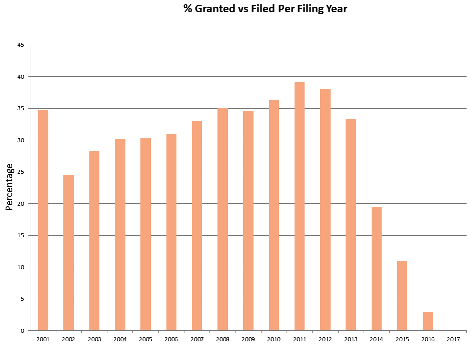 First and foremost, this is about trends and it is important to acknowledge that this strategy relies on some assumptions. Further, applications filed from 2010 are still in prosecution (i.e. have not yet granted), and the delay in release of published data means that data for at least the last three years is incomplete. Additionally, in terms of timeline, it is important to consider that the US Court decisions post Bilski that have specifically impacted diagnostics (particularly Mayo in 2012, Myriad in 2013 and Sequenom in 2015), and the issuance of the USPTOs guidance for the examination subject matter eligibility since 2014, are all relatively recent.

Figures 1 and 2 suggest patent filings and grants are declining over time, while Figure 3 shows that the percentage of granted patents over filed applications has trended upwards to about 2011. Given the assertions that US Court decisions and USPTO examination practice post 2012 have been destabilising to the diagnostics industry, we might expect a dramatic shift in grant rates for diagnostic method patents. We will continue to monitor the data using this strategy to confirm whether this shift occurs.

One advantage of analysing data in this way is that we are able to identify patent holders who are achieving grant in the US under the current regime. Analysing the prosecution histories of granted patents can be a useful tool to ascertain strategies for addressing patent eligibility issues beyond the guidance provided by the USPTO. That is, it is possible to identify granted patents owned by other parties having diagnostic claims that have been prosecuted before the USPTO. Top patentees are identified in Figure 4 below based on the above filing/grant data. 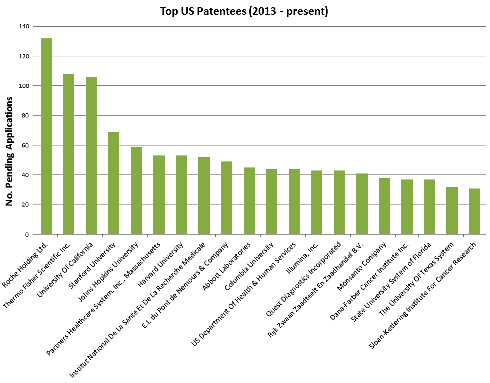 Patentees in the medical diagnostics space will continue to face uncertainty until there is a legislative ‘fix’ to the analysis of patent eligibility in the US. Prosecution of US patents has and will become more costly and time consuming, and while post-filing strategies to maintain pendency are useful, adopting additional pre-filing strategies in anticipation of road blocks faced during prosecution seems inevitable in order to gain commercial certainty in the US. One such pre-filing strategy is to supplement guidance provided by the USPTO on the examination of subject matter eligibility under 35 USC § 101 with intelligence in connection with strategic attorney advice.