The Fair Work Legislation Amendment (Secure Jobs, Better Pay) Bill 2022 will make substantial amendments to the Fair Work Act 2009 (Cth). The Bill is currently being scrutinised by the Senate Education and Employment Legislation Committee for inquiry and report in late November 2022. The Federal Government introduced a considerable number of amendments on 8 November, and more are expected.

We will help you understand the implications of the changes that will flow from the passing of this legislation. In this article we look at the provisions regarding fixed term contracts and flexible work and the impact of these on recruitment and hiring processes.

Policy rationale: The Government considers fixed term contracts exacerbate job insecurity for employees when they are used for the same role over an extended period, or where employees are subject to rolling contract renewals for jobs that would otherwise be ongoing. The Hon Tony Burke MP, Minister for Employment and Workplace Relations, Minister for the Arts described these rolling fixed term contracts as effectively amounting to “a permanent probation period for employees”.

Operative provisions: The Bill seeks to address this policy by: 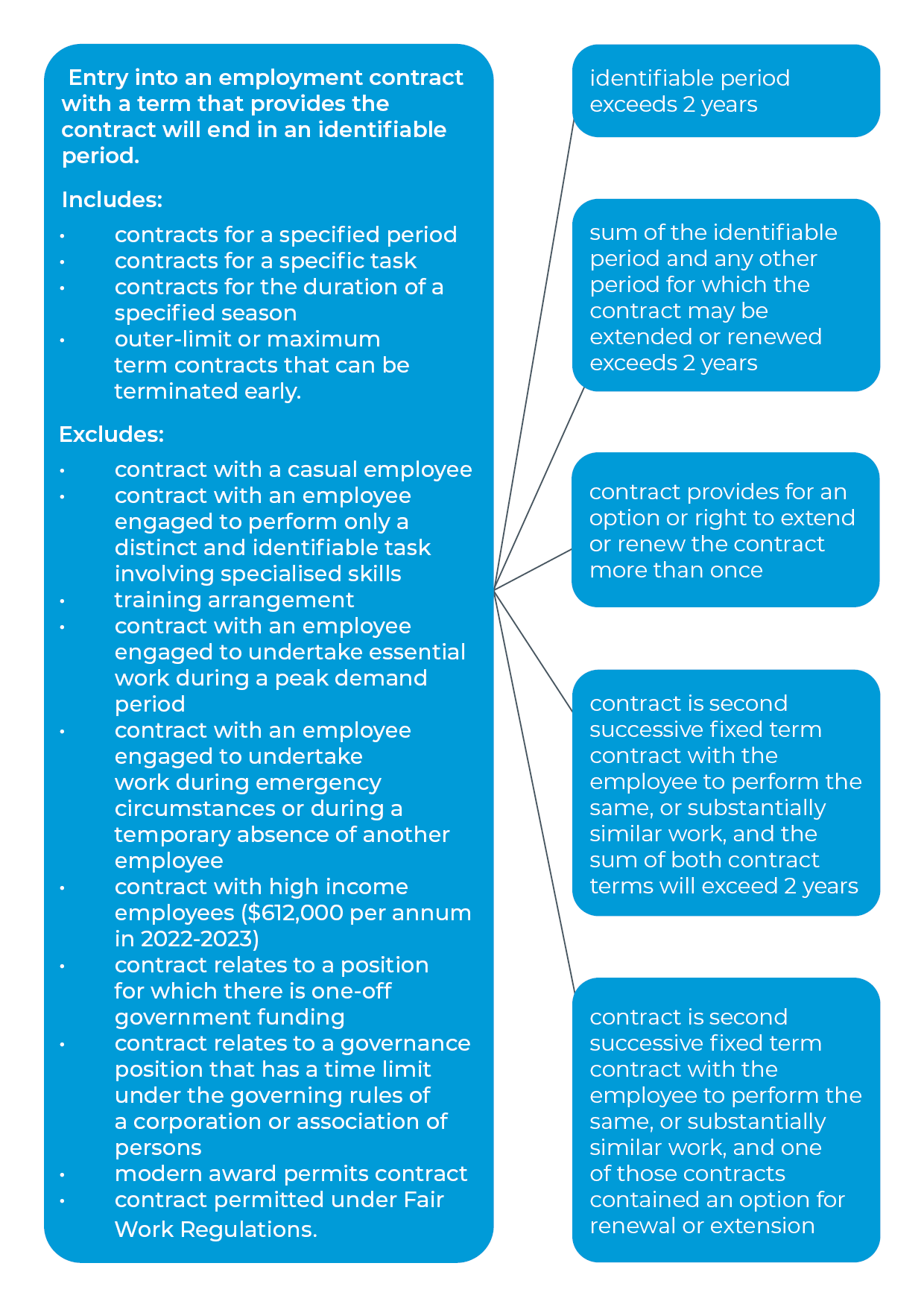 Key issues: What type of contracts attract the prohibition? The test in the legislation is that the contract contains a term that provides the contract will terminate at the end of an identifiable period (whether or not the contract also includes other terms that provide for circumstances in which it may be terminated before the end of that period). The term does not have to actually specify the period or maximum period the contract will operate. It just requires that the period be identifiable from the term. The term does not need to be expressed in writing or be the subject of oral agreement. It could arise by implication where an employee is engaged for a purpose that has a discrete shelf-life.

For example, an employee engaged by a law firm for the sole purpose of allowing that employee to be seconded to the Department of Employment & Workplace Relations to assist with drafting the Bill might be said to have been engaged under a contract providing implicitly for an identifiable term. The contract will end when the Bill becomes law, even if there was an expectation that their employment might continue thereafter under a different contract.

The new provisions might apply to secondments and labour hire assignments. It may even apply to putative independent contractors who are in fact engaged under common law contracts of employment.1

When does the prohibition on second successive contracts apply? The explanatory memorandum to the Bill suggests the second contract will be successive despite a short break between contracts that are not intended to end the employment relationship. Examples might be sessional contracts in the higher education sector that finish at the end of one semester and start at the beginning of the next semester, or where the second contract starts after an employee has taken a short break for personal reasons. However, breaks that are contrived by employers to avoid the prohibition will lead the employer to potential civil liability under anti-avoidance provisions.

The anti-avoidance provisions are contravened if, because of the prohibition against successive contracts, a fixed term contract is allowed to lapse and another employee is employed under a fixed term contract to perform the same or substantially the same work. However, what if one of the reasons for doing so was because another employee is considered more suitable or a better performer? The employer will have contravened the anti-avoidance provisions if one of their reasons was to avoid the prohibition on fixed term contracts, even if the employer had another reason for doing so. Moreover, if the employee challenges their non-engagement as a general protections contravention the onus will be on the employer to prove that the decision was not because of the prohibition.

Disputes about fixed term contracts can be referred to the Fair Work Commission, which can try and resolve the dispute by mediation, conciliation, making a recommendation, expressing an opinion or, if both parties agree, arbitration.

Employers need to review the manner in which they use fixed term employees to ensure this is consistent with the new provisions. The reasons for engaging an employee on a first or second fixed term contract need to be documented, ideally in the contract itself with an employee acknowledgment. This is particularly important where employers intend to rely on any of the exceptions to the prohibition.

Policy rationale: The Government considers that the current laws relating to flexible work arrangements are ‘outdated’ and don’t provide enough incentive for employers to agree to request flexible working arrangements. Further, the view is that there is no recourse for employees if their requests are refused. Minister Burke has said, “too many Australians were struggling to manage their work and care responsibilities, particularly women.”

Under the new legislation, employers will be forced to make genuine efforts to identify an alternative arrangement if the request cannot be agreed upon due to reasonable business grounds. In the event that an agreement can’t be reached, employees will be able to fight for their flexible work arrangement in the Fair Work Commission.

Operative provisions: The proposed section 65A would provide for more detailed requirements for refusing a request for a change in working arrangements. In particular, it would provide that the employer may refuse a request only if they have undertaken certain procedural steps and have provided a response containing detailed reasons for its refusal. The response must be provided within 21 days. 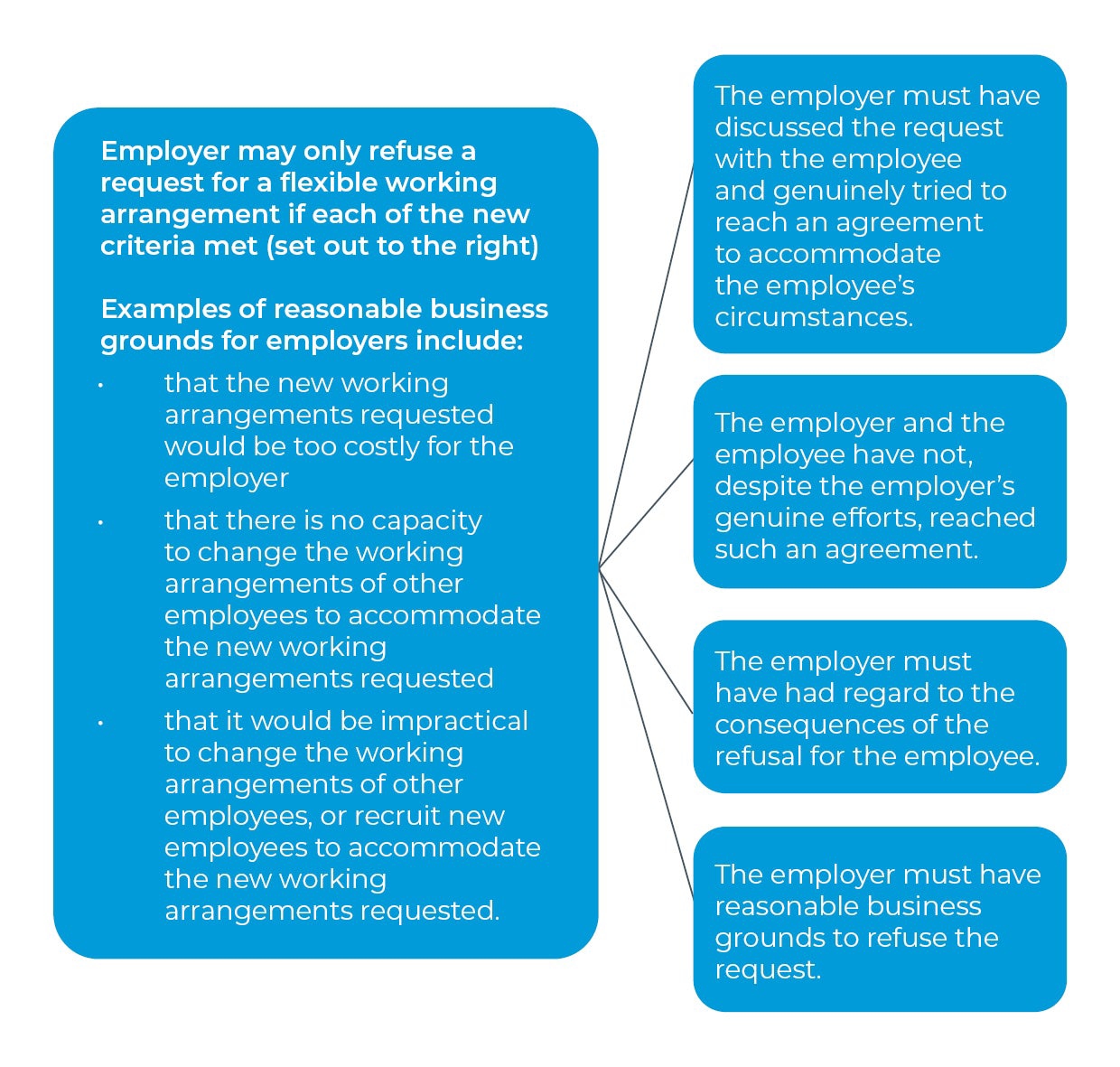 The specific circumstances of the employer, including the nature and size of the enterprise carried out by the employer, are relevant to whether the employer has reasonable business grounds for refusing a request. For example, if the employer has only a small number of employees, there may be no capacity to change the working arrangements of other employees to accommodate the request.

In addition, where an employer refuses the request, they will now be required to provide a more detailed explanation (in writing) which must detail the information set out in the new provision which includes details of the reasons, the particular business grounds for refusing the request, how those grounds apply, any changes that the employer would be willing to make that would accommodate the employee’s circumstances to any extent and the effect of the dispute resolution processes (new sections 65B and 65C).

The Bill will also empower the FWC to deal with disputes where an employer refuses an employee’s request or does not respond to the request within 21 days. The FWC can arbitrate a dispute and order the employer to grant the request or consider alternative arrangements. Contravention of that order will attract civil liability, including potential imposition of a penalty.

If it is satisfied that there is no reasonable prospect of the dispute being resolved, the Fair Work Commission may order that the employer grant the request or make other changes to the employee’s working arrangements to accommodate the employee’s circumstances.

Key issues: When can an employee request a flexible working arrangement? An employee may make a request for a change in working arrangements if the employee: has a disability; is 55 or older; has carer responsibilities, including as a parent of a child who is of school age or younger, or as a carer for someone who is elderly, ill or disabled; is experiencing family and domestic violence; or provides care or support to a family member who is experiencing family and domestic violence. The request must be in writing and set out the reasons for the requested change.

What kinds of changes in working arrangements are contemplated by the FW Act? They would include changes in hours of work, changes in patterns of work and changes in location of work. This would of course encompass a request to work from home.

What are reasonable business grounds for refusing a request? Since almost all requests will result in some cost from the proposed arrangement, it will generally be insufficient for an employer to simply point at cost as being a reason for refusal. Instead, the employer must point to some cost over and above what may be regarded as inevitable small adverse impacts.

Potential implications for your organisation: It will be both necessary and important to set up processes for assessing and responding to requests for flexible work and ensuring that staff are trained to ensure they comply with the new requirements. These provisions would apply in relation to a request made on or after the commencement of part 11 of the amending act.

Refusing an employee’s flexible work request that is made on grounds of age, disability or parental and carer responsibilities may also expose employers to claims for a breach of anti-discrimination legislation. Further, it is going to be essential that an employer’s management team are trained to identify when an employee is exercising a workplace right, especially if an employee makes a complaint regarding the outcome of a request so that any decisions or actions moving forward are managed to avoid any claim of adverse action. This is especially important if the employee is involved in a concurrent process including disciplinary processes.

The amendments will require that employers actively, and genuinely, consider requests for flexible arrangements and actively engage in discussions with employees. Refusal of requests is only possible where the employer and employee have been unable to reach agreement, the employer has had regard to the consequences of the refusal for the employee and the refusal is based on reasonable business grounds. The merits of the employee’s request are not a relevant factor – only the employer’s capacity to accommodate the request is relevant.

In preparation for these changes to the FW Act, human resource teams should be considering the following activities: