The state of mobile SEP licensing after recent high-profile FRAND cases in London, California and Shenzhen

The TCL v Ericsson FRAND case and the Unwired Planet v Huawei case bookended 2017. Both have shed further clarity on issues surrounding SEP handset licensing. Last week in Huawei v Samsung, a court in the Chinese tech hub of Shenzhen granted Huawei an injunction after finding that Samsung had infringed an ‘international’ SEP. What effect will these cases have on the IP market?

In order to find out, Lew Zaretzki of Hamilton IPV, and Conversant CEO Boris Teksler delved into the decisions handed down by the High Court in London and the US Central District of California Court, in combination with looking at the Court of Justice of the European Union’s 2015 decision in Huawei v ZTE and the approach to SEP/FRAND issues employed by the Chinese authorities and courts. This is what they came up with:

While the handset industry has largely embraced proportionality in SEP valuation, substantial uncertainty continues as to the quantities of SEPs held by individual firms, and the numbers at large in the market generally. The ETSI database provides only a starting point and over-declaration is a significant problem which obfuscates true ownership.

With over 5,900 patent families declared to ETSI, the Birss (London court) and Selna (California court) decisions had to sort through this data set. We can observe their efforts and those of three parties involved in the cases, which between them arrived at a number of different estimates of the quantity of mobile SEPs at large.

These differences are substantial and can, in turn, drive substantial differences in royalty rates. There is no assurance that any of the above figures are correct, with several industry experts believing that the true number of SEPs is far lower than depicted in this range.

When undertaking the Unwired Planet v Huawei & Samsung case, Boris was repeatedly told that a court would never adjudicate a worldwide portfolio rate and that only patents in suit for the isolated geography could be valued through proceedings. This was a standard defensive tactic and in many ways spurred a significant counter-measure in the form of proxy fights - or what some may term as “privateering”.

Now, though, we have three court decisions that have in fact adjudicated a worldwide portfolio royalty rate - and they appear to be highly convergent. These decisions reflect the fact that a worldwide licence is often the most practical approach when resolving large portfolio cases. This was recognised by Justice Birss in Unwired Planet and by all parties in TCL, as they each asked the court to decide the issue. Such an approach can also limit the conflict in both in terms of jurisdictions and in number of patents, and create a far more efficient path to resolution. Parties interested in concluding agreements together will often find this approach attractive going forward, though it will be of little interest to parties who don’t see justification for closing a particular deal.

Shortly after the Selna decision the Shenzhen Intermediate Court in Huawei v Samsung ruled that the global 4G LTE aggregate is 6%-8%. Further, the court ordered a permanent injunction, ruling that Samsung failed to meet its FRAND commitment by extending negotiations for over six years, during which time it delayed technical diligence and response to offers, insisted on bundling non-SEPs with SEPs and rejected Huawei’s proposal for arbitration to resolve the dispute. Samsung may appeal the decision up to the Guangdong Higher Court in the short term.

Let’s compare the results of the three cases and, perhaps more importantly, ask the question of what behaviour they are likely to yield. The following table depicts 4G stack cumulative royalty rates suggested or referenced by Judge Selna and the Shenzhen Intermediate Court (top down proportionality driven), and Justice Birss (comp-driven), along with some additional relevant benchmarks and observations: 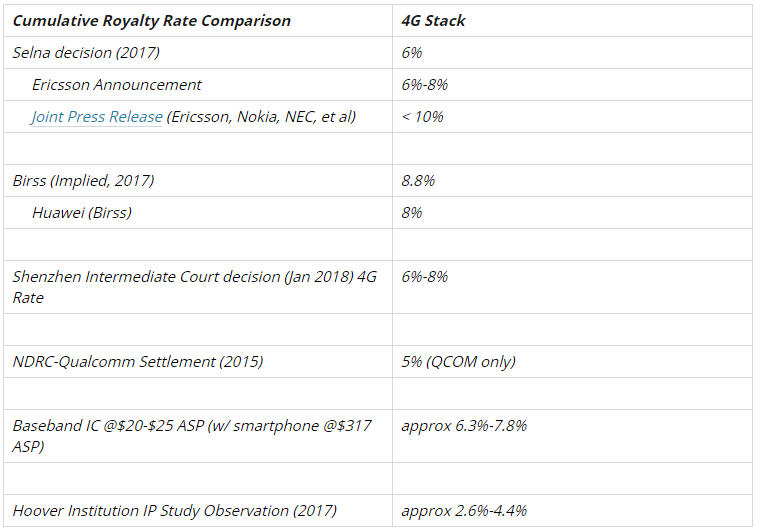 We also contrast the courts’ findings with the average industry royalty stack observed in practice. In a study at Stanford’s Hoover Institution, Lew worked with Professors Stephen Haber and Alexander Galetovic to observe mobile SEP royalties of approximately $11b (2016), and an effective mobile SEP royalty yield of approximately 2.6% of ASP. Applying a 4G stack rate of 6%-8% would suggest aggregate 4G royalties of $24 billion to $33 billion, implying that the Hoover study observed just 35%-45% of expected royalties.

If we attempt to square these observations with recent court decisions, we may hypothesise that unobserved royalties (eg, obtained by a private party and not publicised), unresolved licensing engagements and a combination of other factors account for the unobserved 55%-65% of anticipated royalties. These factors include the Qualcomm pass through, exhaustion and implied licences, cross licences, commercial agreements (eg, between carriers or suppliers and OEMs), licensing détentes among prospective counter-parties, and SEP patentees lacking either motivation or capability to license due, for example, to business model choices and/ or subscale licensing positions.

Judge Selna noted that the findings in his decision would require modification for use in situations concerning the licensing of higher-priced premium devices for which “brand value and other intangibles” represent a more significant share of price and are wholly unrelated to mobile SEPs. Therefore, it is important to consider that a Selna or Birss like approach may not be applicable to specific licensing engagements, or may require modification or extension to be useful in such cases. Furthermore, these changes might suppress the aggregate royalty stack for the market, further closing the gap with the observed royalty yield.

But the question is: will all of this move the industry past the status quo smartphone patent wars? Regretfully, our prediction is no. Taking the results of the TCL v Ericsson case at face value and discounting the possibility of major changes on appeal, one might anticipate two potential consequences:

To the extent that the TCL v Ericsson decision proves informative and influential - and future decisions build upon those of Judges Selna, Justice Birss and others - the market may gain sufficient clarity as to proper SEP licensing practice and the prevailing rates and move toward more confident and efficient deal-making.

However, it is at least equally probable that in the absence of material incentives, parties will persist in seeking unreasonable outcomes (eg, hold-out and hold-up). But what sorts of incentives could most efficiently and effectively help? There is plenty to think about and much work to do in 2018.