The past five years witnessed a boom in the online education sector in China with annual revenues increasing from RMB 122.54 billion in 2015 to RMB 269.26 billion (forecast) in 2019[1]. The rapid expansion is attributable to consumers’ love of the internet, the continued growth of the middle class combined with the high regard in which education is held in China.

However, the online education regulatory regime has not matched the sector’s speedy development. The regulations remain fragmented and spread across a variety of regulations that govern online activities more generally.

Curiously for a business that combines two highly sensitive areas of the Chinese economy – the internet and education – online education was only first officially addressed in 2018.

To some extent the PRC regulators are catching up as they have issued a slew of regulations in order to better regulate online education. The regulations acknowledge the hybrid nature of online education as a number of different authorities are cooperating in building the regulatory framework.

The first regulation officially addressing online education is the Opinion on Regulating After-school Training Institutions (“Opinion 80”) issued by the State Council in August 2018. Opinion 80 requires governmental agencies in telecommunications, culture, industry and information and broadcasting sectors to cooperate with education regulators in respect of online education.

Since the issuance of Opinion 80 the PRC regulators have published 5 regulations/rules (including one draft regulation) aimed at regulating and guiding the development of online education in China.

The other regulations that impact online education include: 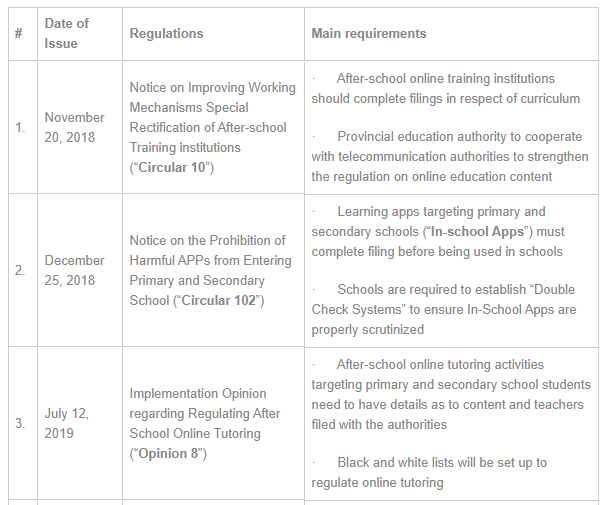 As outlined above – the authorities have recognized that online education crosses over a number of areas of competencies and therefore requires coordination and cooperation amongst regulators. This is emphasized by both Opinion 80 and Opinion 55 as online education touches upon both education and the internet.The filing requirements for online training activities (including those conducted via an App) are already effective and requires existing players in the online education market to comply.

Can foreign companies invest in online education in China?

As expected, there is no simple answer for the foreign investment in the online education in China.

In addition to the school filing which needs to be obtained from the local education authorities, the foreign invested Chinese subsidiary may need to obtain additional licenses or permits from other regulators before it will be able to operate its business. As will be seen from the below table in most cases such licenses will not be obtainable: 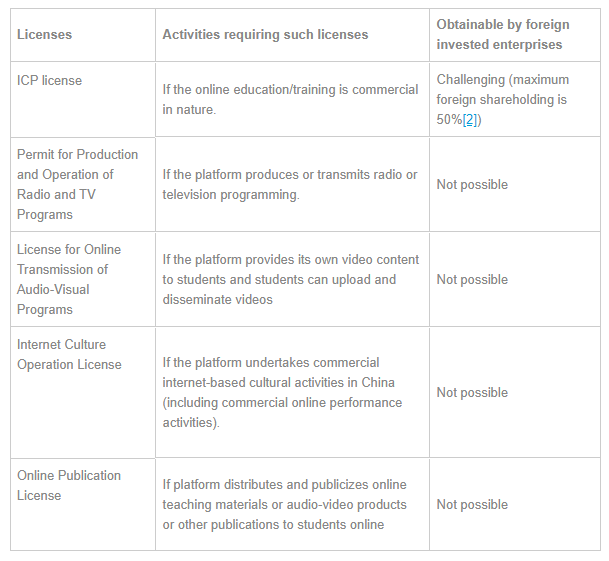 Despite the rigid regulations outlined above there are many large education companies that are very active in online education in China. Some have operated an offshore model, but most have adopted a VIE model.If you cannot do much legally then what is the reality?

The VIE model is where a foreign company arranges for domestically incorporated entities to be held by nominees and which are controlled by the foreign company by means of contractual arrangements. Under a VIE structure, the “controlled” domestic company obtains the requisite licenses to operate the business. The contractual arrangements typically include exclusive service agreements which allow the finances of both entities to be consolidated under GAAP accounting rules.

VIE structures are also used by foreign investors who wish to circumvent restrictions on operating in China in restricted or prohibited sectors (such as online, education and online education!).

It has long been considered that VIE structure is a “grey” area of Chinese law as it has never been tacitly approved by the PRC authorities and there have been some cases where the domestic company decided to not fulfil its obligations under the contractual arrangement and when taken to court it was ruled that such contractual arrangements were unenforceable as they were intended to circumvent PRC regulatory requirements. 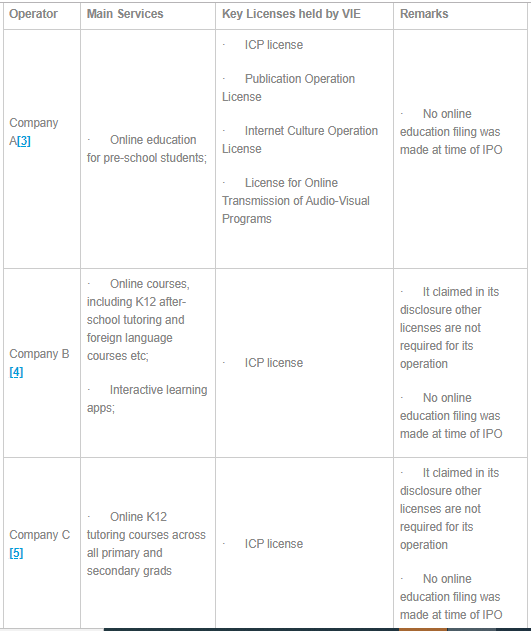 Offshore modelMost of the companies do not hold the necessary operating licenses we mentioned above even though they are listed. Accordingly, it seems that the relevant regulations in respect of online education are not being strictly enforced and a grey area remains. However, there is a risk that trend to increasing regulation will not doubt be of concern to such companies. In particular, it should be noted that the Draft Private Education Regulation explicitly bans VIE models in respect of compulsory education.

As online education touches upon both internet and education, two equally sensitive and highly restricted sectors in China, some foreign investors eschew the option of establishing a foreign-invested enterprise in China as it will not be able to obtain most of the operational licenses required to be compliant. As an alternative, some companies are operating a “purely” offshore model to distribute online education services to Chinese students.

From a practical perspective, it is difficult for the PRC government to exert any substantial supervision over a website whose servers are situated outside of China. However, the offshore model does still face restrictions under PRC law in respect of interaction with Chinese consumers; issues with transfer of funds out of China; invoicing; permanent establishment risk, privacy etc.