An invalidity action was filed at the EUIPO against a granted registered Community design (RCD) and the Invalidity Division declared the contested RCD to be invalid based on a prior art design in the form of an earlier RCD which had been published in the year preceding the filing date of the contested RCD.An RCD usually benefits under EU design law from a grace period which excuses disclosures into the public domain of the design in question by the applicant or related parties such as the designer in the twelve months preceding the filing date.

The owner of the contested RCD filed an appeal at the EUIPO. In their appeal submissions they referred to the decision that had held the earlier RCD to be invalid, but their appeal submissions did not specifically reference or identify the screenshots of washing sponges taken from videos uploaded to the website in January and April 2010 and which had been relied on in the reasoning of the decision relating to the earlier RCD. 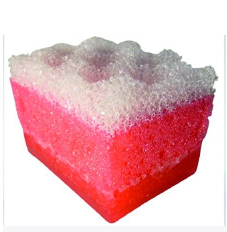 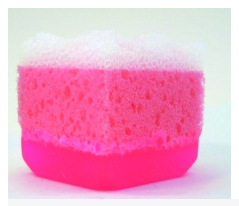 The contested RCD. RCD No. 001333223-0001. Filed on 29 April 2012. Owner of the contested RCD: REFAN BULGARIA EOOD. The contested RCD was depicted with only a single view and it showed (and thus claimed) the red, pink and white colour schemes of the layers.

The proceedings then moved up to the General Court (GC) of the EU, which maintained the decision of the Board of Appeal. The GC said that the appeal which had been filed at the EUIPO should have stated the complete case that was being relied upon, and should not have attempted to import evidence into the case indirectly by simply referring to the invalidity decision relating to the earlier RCD. In particular, the GC said: “Therefore, it must be concluded that it was for the [invalidity] applicant, not only to identify and reproduce clearly the prior designs [of January and April 2010] which had been used as a basis for the [invalidity decision relating to the earlier RCD], but also to refer to the evidence examined in [that decision]. [The] EUIPO was therefore correct to take into consideration, during the examination of the application for a declaration of invalidity [of the contested RCD], only those designs which were expressly relied on by the [invalidity] applicant. Consequently, the Board of Appeal carried out a proper examination and did not infringe the principles of sound administration and equal treatment.” (Case T‑532/18; decision issued on 17 September 2019; Aroma Essence Ltd (appellant and applicant in the invalidity action) v European Union Intellectual Property Office (EUIPO).)

The message from the GC therefore emphasises the importance of stating one’s complete case when filing an appeal at the EUIPO, and ensuring that the appeal submissions in themselves contain all facts, evidence and arguments that the appellant wishes to rely upon.