The Australian Federal Court has overturned a decision by the Commissioner of Patents and concluded that a computer implemented business method is patent eligible subject matter. In doing so, the Federal Court has clarified in Rokt Pte Ltd v Commissioner of Patents [2018] FCA 1988 that the correct approach when assessing patentable subject matter is to consider the combination of integers as claimed.

Rokt Pte Ltd (Rokt) applied on 13 March 2013 for grant of an Australian patent entitled “A Digital Advertising System and Method”. Australian Patent Application No. 2013201494 was subject to a re-examination initiated by a Delegate of the Commissioner of Patents (Commissioner) which concluded that the patent application should be refused (Rokt Pte Ltd [2017] APO 34). Rokt appealed the Delegate’s decision. 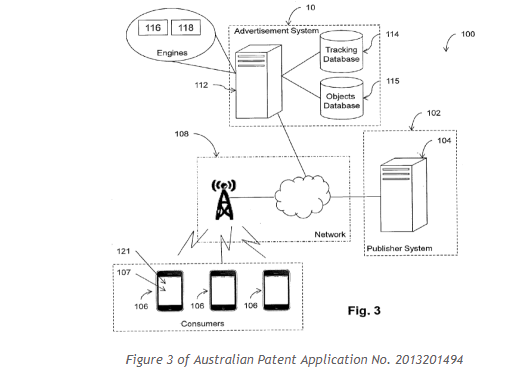 “…the substance of the invention was to introduce a dynamic, context-based advertising system, introducing a distinction between an engagement offer, without a direct advertising benefit, and an advertisement designed to lead directly to the sale of the product. This was an improvement in computer technology. It involved the new layer of engagement offers and the insertion of a widget into the publisher content to serve the engagement offer. A data-based scoring algorithm was used to decide what engagement offers to serve. This was an important improvement to existing computer-based advertising. The invention also introduced the recording and transmitting of user interactions with advertisements and the using of that data to select subsequent advertisements.”

“I find that there was a business problem of attracting the attention of the user and having the user choose to interact with the advertiser, but this problem was translated into the technical problem of how to utilise computer technology to address the business problem. The invention aimed to solve this technical problem through the introduction of the engagement offer and identifying what steps the software needed to execute in order to modify dynamically the website that the user was browsing while they were browsing it to, first, implement in the web browser or device the concept of the engagement offer, second, to implement in the computer system the necessary software for selecting engagement offers and advertisements for the given user based on the previous interactions with the system and the interactions of other similar users and, third, to have that system interact with the widget in the web browser in real time.”

The Commissioner’s submission, that each integer of Rokt’s invention was well known in isolation, was considered an incorrect approach for assessing patentable subject matter by the Court stating at [212] and [213] (emphasis added):

“In addition, known components had been integrated into a single system in an innovative and previously unknown way. The invention brought together some new elements and some known elements to form a working combination that had not previously been achieved and involved the use of computers in a way that was foreign to their normal use as at December 2012.

Taken in isolation, a database, a client-server architecture, the running of the Javascript program on a publisher’s website and the creation of a ranking engine to rank abstract data to achieve an ordered list were each known as at December 2012 but, in combination, the distinction between engagement offers and general advertising, coupled with the algorithms making use of background data for personalisation and ranking was a new combination of new and previously existing components and a new use of computer technology.”

A significant portion of this decision relates to the expert evidence submitted by each party. This is a substantial change in practice as previously the test for patentable subject matter largely turned on the face of the specification. However, as the test for patentable subject matter has evolved to include a comparison of the substance of the invention against the state of the art, practice is also evolving.

This case indicates that Applicants facing patentable subject matter objections from the Australian Patent Office should consider the submission of expert evidence during prosecution of the patent application. For example, the preparation of a statutory declaration outlining the state of the art at the priority date and an explanation of the technical problem and solution of the invention as claimed may be advantageous.

This is a positive decision by the Federal Court indicating that computer implemented business methods, which solve a technical problem with a technical solution, are patentable subject matter in Australia.

We are hopeful that this decision is a precursor to the Full Federal Court decision in the appeal from Encompass Corporation Pty Ltd v InfoTrack Pty Ltd which is expected to issue mid-2019. See our previous article here.