Transparency International (TI) has launched its annual Corruption Perception Index (CPI). China’s ranking continues to improve, moving up by two places to a rank of 77 from last year’s rank of 79.

Our alert discusses some of the highlights of the 2017 CPI.

The latest 2017 CPI was launched on 21 February 2018. The CPI is the leading global indicator of public sector corruption and offers a snapshot of the relative degree of corruption by ranking countries from all over the globe. It has been used as an important gauge by companies in managing corruption risks when conducting businesses in foreign countries.

TI has reported that this year’s results continue to show a high variance in public sector corruption across the Asia Pacific region and reveal that corruption in many countries is still strong. With a scale of 0 to 100, where 100 means very clean and 0 reflects a deep-rooted, systemic corruption problem, TI considers that the Asia Pacific countries, on average, are failing.

The latest CPI is a good reminder for companies that rely on its rankings to review their global compliance programs and make regional adjustments accordingly. Companies should pay attention to those countries and regions that have dropped significantly in their rankings and scores, and identify any compliance risks that may be previously undetected.

Some highlights of the 2017 CPI, which ranks 180 countries and territories, include:

The table below sets out some key jurisdictions in the Asia Pacific showing their 2017 CPI rankings and scores against their 2016 position. 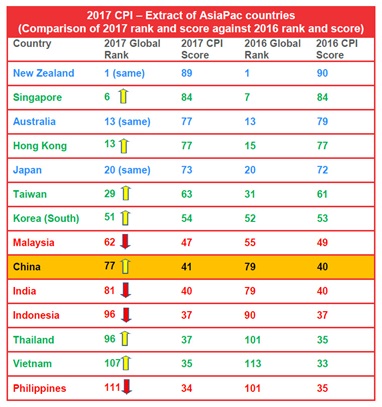 China's improvement in its CPI ranking is in step with its ongoing anti-corruption and bribery campaign. We continue to see efforts going beyond public sector bribery. For example, commercial bribery has received significant attention by way of amendments to the PRC Anti-Unfair Competition Law (the AUCL), which became effective on 1 January 2018.

Companies doing business in China need to remain vigilant as the amendments have widened the scope of commercial bribery and increased the risks of falling foul of the AUCL. Bribe recipients can now include third parties engaged by a transaction counterparty. Further, employers can be vicariously liable for their employees’ commercial bribery activities. Our recent experience has also seen an increased number of dormant bribery schemes involving sourcing and procurement relationships. In addition to reviewing existing compliance policies and programs, companies should review their third party policies to ensure there are no gaps or potential exposures under the new regime. We also recommend a detailed review of existing business arrangements involving transaction counterparties and third parties such as agents, distributors, suppliers or other intermediaries.

Businesses will therefore find the Chinese anti-corruption landscape tougher than ever, compounded by greater investigative powers given to authorities under the reform.