Bill 138, the Plan to Build Ontario Together Act ("Bill 138"), which includes amendments to the Independent Health Facilities Act ("IHFA") and Health Insurance Act ("HIA"), was introduced by the Ontario Minister of Finance on November 6, 2019 and received Royal Assent on December 10, 2019.[1]

Bill 138 changed the "request for proposal" process under the IHFA to a "call for application process". Although some comments have suggested that this is a noteworthy change, it is not yet clear whether this change will be significant in practice. The factors considered by the Minister of Health (the "Minister") in deciding whether or not to authorize the Director appointed under the IHFA to call for applications are substantially the same as the factors under the prior request for proposal process, except that the amended provisions add that the Minister may consider any other matter relevant to the management of the health care system.

The amendments to the application and licensing process in the IHFA made by Bill 138 are particularly interesting given that they may signal an intention on the part of the Ministry of Health to issue new licences.

Bill 138 creates new record-keeping rules in the IHFA. Pursuant to these rules, every licensee must maintain records as may be necessary to establish:

The amendments provide that the Minister may refuse to pay for a service if the claim for payment is not prepared in the prescribed manner.

New provisions also set out the specific circumstances in which the Minister may refuse to pay for services, pay reduced amounts, pay for services other than those described in a claim or require reimbursement for amounts paid; such as, where all or part of the service was not in fact delivered, where there is an absence of the required records, or where the Minister is of the view that the nature of the service is misrepresented, even if inadvertently, or the service was not provided in accordance with generally accepted standards.

Authority to make a compliance order or to revoke or suspend a licence under the IHFA may be exercised whether or not the licensee took all reasonable steps to prevent the non-compliance.

The amendments to the IHFA under Bill 138 broaden the circumstances in which the Director may revoke or suspend a licence, by being authorized to do so not only where a licensee or an employee of a licensee is in contravention of the IHFA (or any other Act or regulation of Ontario or Canada), but also where any regulated health professional who is affiliated with the independent health facility is in contravention of it.

In addition, the maximum fines for individuals and corporations for non-compliance with certain provisions of the IHFA, including with requests for information or compliance orders, are increased by at least double pursuant to the amendments under Bill 138, as shown in the chart below: 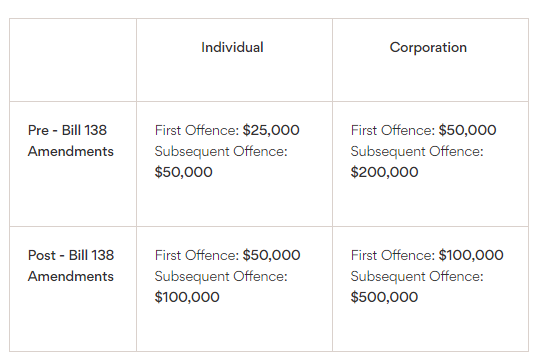 Impending Repeal of the IHFA

Notably, despite the amendments to the IHFA enacted by Bill 138, the IHFA is currently pending repeal. Bill 160, the Strengthening Quality and Accountability for Patients Act, 2017 ("Bill 160") received Royal Assent on December 12, 2017. If proclaimed, it will enact the Oversight of Health Facilities and Devices Act (the "OHFDA"), a new regime for community health facilities and energy applying and detecting medical devices. Existing independent health facility licences would transition to the OHFDA. Licences for independent health facilities would be replaced with community health facility licences. The IHFA would be repealed.[5]Impending Repeal of the IHFA

Amendments to the Health Insurance Act

Schedule 15 of Bill 138 enacts amendments to the HIA. Among other things, the amendments:

Schedule 15 of Bill 138 was amended by the Standing Committee between the second and third reading. The original version of Bill 138 introduced new rules requiring that in order for physicians to submit claims for payment to OHIP, or receive payments from OHIP pursuant to an arrangement under OHIP, they must have been granted "billing privileges" by the General Manager. The term "billing privileges", which was introduced in the original version of Bill 138, was removed in the final version. Instead, the current provisions refer to the granting of a "billing number". Subject to any regulation, the General Manager will grant a billing number to a physician, practitioner or health facility. The amendments expand the existing rules applicable to billing numbers.

Bill 138 establishes a new power through which the General Manager may publish information, including personal information, other than personal health information, that relates to any payments under the HIA to a physician, practitioner or health facility.

When the original version of Bill 138 was released, comments were made regarding the adverse impact this provision could have and suggested that it would be appropriate to have contextual information accompany the release of physician billing information. While the final version of Bill 138 carves out certain information which cannot be published by the General Manager; the carve out only addresses information received by the General Manager in connection with a hearing requested to require reimbursement from physicians to the Ontario Health Insurance Plan, and does not appear to address the concerns with the new power established.

Schedule 1 of the HIA enacted by Bill 138 also increases the period of review for which the payments made to a physician may be reimbursed for, from 12 months to 24 months.

To view all formatting for this article (eg, tables, footnotes), please access the original here.
Fasken - Sophie MacRae and Jordana Keslassy
Back Forward