Since the introduction of the demerger rules in Division 125 of the Tax Act in 2002, Gilbert + Tobin has advised on numerous demergers, including some landmark transactions, such as the first three-way demerger and scrip-for-scrip acquisition involving Foodland, Metcash and Woolworths. Over that time, we have seen a narrowing by the Commissioner of Taxation (ATO) of the scope of the demerger provisions.

Most recently, in June 2018, the ATO advised our client, AMA Group Limited (AMA Group), that demerger relief was not available in respect of the proposed transaction. The AMA Group withdrew its private ruling application, and the ATO will therefore not issue a ruling in respect of the transaction. Without a ruling, we must surmise the reasons for the ATO’s views.

Demergers typically occur in one of two scenarios, in our experience:

If the demerger rules apply:

In order for demerger relief to apply, a “demerger” must happen, which requires:

The AMA Group proposed to demerge its Automotive Component, Accessory and Procurement Business (ACAD Business) while retaining its Vehicle Panel Repair Business (Panel Business), as shown in the following diagrams. 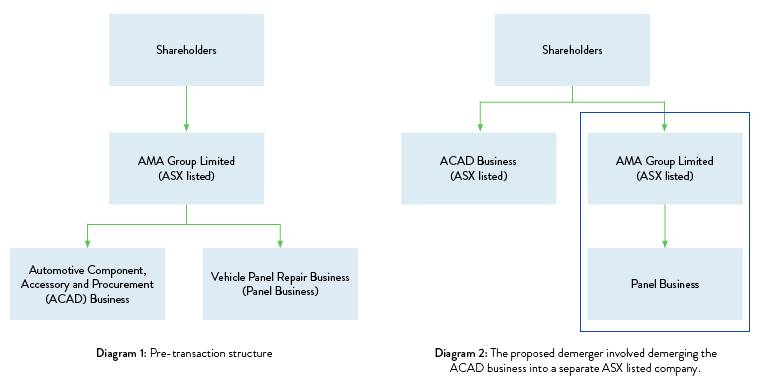 The nothing else requirement requires Shareholders acquire shares and nothing else (such as cash or something of value).

The ATO used to accept the situation where the demerged group was the subject of a takeover after the demerger, provided the demerger was not conditional on a subsequent acquisition occurring, as was the case in the demerger involving Foodland, Metcash and Woolworths.

The ATO eventually changed its position and accepted the situation where it was the demerger group that was the subject of the takeover, such as where Buru Energy Ltd was demerged from ARC Energy Ltd. ARC Energy Ltd was later acquired by AWE Ltd, and both the demerger and acquisition formed part of the scheme. The ATO also granted demerger relief where the demerger of Talon Petroleum Limited from Texon Petroleum Limited was a condition precedent to Texon’s subsequent acquisition by Sundance Energy Australia Limited.

However, the ATO’s most recent position is reflected in its views in the AMA Group transaction as well as in recent class rulings, such as CR 2018/31 relating to the Westfield Group acquisition by Unibail-Rodamco SE. Notwithstanding the absence of any conditionality between the demerger and the acquisition, and notwithstanding that it was the demerger group that was the subject of the acquisition, it appears to us the ATO has most likely branded the demerger and acquisition as a single restructure such that the cash or shares to be received from the takeover would have breached the nothing else requirement.

It is clear that the availability of demerger relief where a demerger is followed by a subsequent sale is now more difficult, if not impossible. Future demergers, motivated by a possible sale, need to be carefully considered in light of the moving goalposts.