Kelley Drye’s Communications Practice Group presents this tracker of active Telephone Consumer Protection Act (“TCPA”) petitions before the Federal Communications Commission (“FCC”).  With the recent increase in litigation regarding alleged violations of the TCPA, many issues relating to the interpretation of the statute have been presented to the FCC by impacted parties.  These petitions can be primary jurisdiction referrals or be presented directly by a litigant in a TCPA action.  The FCC currently has a number of petitions pending related to TCPA interpretation.  The tracker below briefly summarizes each petition and the issues presented in them. 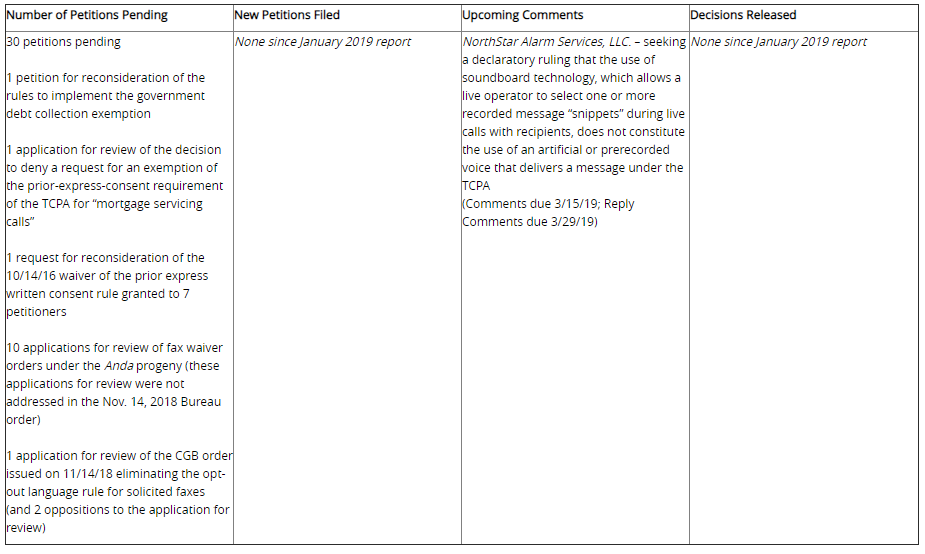 FCC Initiates Rulemaking on Spoofed Calls and a New Definition for “Text Messages” At the FCC’s open meeting on February 14, 2019, the five FCC commissioners voted unanimously to issue a Notice of Proposed Rulemaking (NPRM) to modify the Commission’s Truth-in-Caller-ID rules pursuant to amendments to the Communications Act adopted by Congress as part of the RAY BAUM’s Act of 2017.  In particular, the FCC proposes to extend its caller ID spoofing rules to apply to communications originating from outside the United States, and expand the scope of “covered communications” under those rules to include alternative voice and text messaging services.  Additionally, the FCC proposes to amend several definitions under its rules, including to re-define “text message” as “a message consisting of text, images, sounds, or other information that is transmitted to or from a device that is identified as the receiving or transmitting device by means of a 10-digit telephone number or N11 service code.”  The proposed rule expressly includes SMS and MMS messages in this definition, and expressly excludes “(i) a real-time, two-way voice or video communication; or (ii) a message sent over an IP-enabled messaging service to another user of the same messaging service, except [an SMS or MMS message].”  In her statement accompanying the NPRM, Commissioner Jessica Rosenworcel was critical of the FCC’s pace of enforcement on robocalls and called for the FCC to create a Robocall Division in the Enforcement Bureau.  Comments on the NPRM will be due 30 days after it is published in the Federal Register, and reply comments will be due after an additional 30 days.      FCC Issues Staff Report on "Robocalling" On February 14, 2019, the FCC’s Consumer and Government Affairs Bureau issued a staff report on illegal robocalls which highlighted ongoing FCC and industry-led initiatives on the issue, including the FCC’s 2017 call blocking order, its work towards deploying a reassigned number database, recent enforcement actions against alleged illegal robocallers, and the industry’s development of a call authentication framework. It also provides data on trends in call volume and consumer complaints (the report explains that “[t]he data generally combine all types of robocalls—illegal and legal, unwanted and wanted”).  Finally, the report lists among its enforcement challenges that many illegal robocalls originate in foreign locations and on VoIP providers that lack regulatory contact information or lack accurate call records. The report was prepared in consultation with the Federal Trade Commission’s Bureau of Consumer Protection, which also works to address telemarketing issues, primarily through the Do Not Call Registry and the Telemarketing Sales Rule.  A copy of the report is available here.      Pallone Reintroduces Legislation to Refocus the TCPA on Robocalls On February 4, 2019, Representative Frank Pallone, Jr. (D-NJ) reintroduced the Stopping Bad Robocalls Act (H.R. 946), aimed at significantly revising the TCPA to be more focused on “robocalls.”  Several of the provisions in the legislation, which mirror a bill Rep. Pallone introduced in June 2018, are specifically in response to the D.C. Circuit’s ruling in ACA International v. FCC.  Specifically, the bill proposes to eliminate the current definition of “automatic telephone dialing system,” and instead impose a general prohibition on robocalls, defined as calls made “(A) using equipment that makes a series of calls to stored telephone numbers, including numbers stored on a list, or to telephone numbers produced using a random or sequential number generator, except for a call made using only equipment that the caller demonstrates requires substantial additional human intervention to dial or place a call after a human initiates the series of calls; or (B) using an artificial or prerecorded voice.”  Next, the bill would allow consumers to revoke prior express consent for receiving calls at any time and in any reasonable manner. The legislation also proposes to require the FCC to adopt stringent consumer protection measures for any class of robocalls that the FCC exempts from the TCPA, and mandates the establishment of a reassigned number database. To bolster the FCC’s enforcement capability, the bill proposes to extend the statute of limitations to four years for callers violating the prohibitions on autodialed calls, robocalls, or spoofing, as well as allow the FCC to immediately go after bad actors, rather than requiring the FCC to wait for a second offense.  It further provides that within a year after the date of enactment of the bill, the FCC would be required to prescribe consumer protections to require telephone service providers to authenticate the source of calls. Finally, the bill would require the FCC, after consultation with the Federal Trade Commission, to submit annual reports to Congress detailing the Commission’s progress in stopping robocalls. The bill is currently awaiting action by the House Energy and Commerce Committee, which Rep. Pallone chairs.      Consumer Groups Ask FCC to Cast Wide Liability Net for Calls to Reassigned Numbers On January 28, 2019, a consortium of consumer advocates led by the National Consumer Law Center filed a letter with the FCC urging the Commission to adopt certain standards for liability for calls placed to reassigned numbers, both before and after the implementation of the FCC’s reassigned number database. In brief, the letter proposes a standard that places a detailed obligation on the calling party to demonstrate reasonable reliance that they had consent for the call. The consumer advocates first propose that the FCC keep its 2015 definition of the “called party” as the current subscriber to the phone (not the intended recipient). Second, for the time period before the reassigned number database is functional, they propose the following standard to absolve a caller from liability when the call reaches a different subscriber by mistake:

This standard would apply to calls made over the next year or so, as well as past calls made to reassigned numbers. Once the reassigned number database is operational, the FCC-adopted safe harbor would become the standard, although the consumer advocates urge the FCC to “make clear that, in order to avoid liability, the caller must also prove that it had consent from the party it intended to call.” Finally, the consumer advocates ask the FCC to consider mandating an automated, interactive opt-out system for all prerecorded calls and for texts.  The FCC has not responded to this request, but there is speculation that the Commission will take further action related to the TCPA and robocalls in the near future. Awaiting Decision (Items on "Circulation") None

Other Pending Petitions Petitions are grouped by their primary subject matter. Petitions Relating to "Prior Express Written Consent"

Special Note Regarding “Solicited Faxes” Anda, Inc. Retroactive Waiver.  On October 30, 2014, the FCC released an order addressing petitions seeking clarification of the Commission’s rules requiring individuals and entities that send fax advertisements to include certain information on the fax to allow recipients to “opt-out” of receiving such transmissions in the future.  The FCC denied all of the petitions insofar as they requested the FCC to rule that the “opt out” language requirement did not apply to faxes sent with the prior express consent of the recipient, but granted a retroactive waiver to the petitioners and other similarly situated parties because the scope of the opt-out requirement was previously unclear.   Related orders granting retroactive waivers to 154 petitioners were granted by the Consumer & Governmental Affairs Bureau on August 28, 2015 (DA 15-976), December 9, 2015 (DA 15-1402) and November 2, 2016 (DA 16-1242).  Seven applications for review of the August 28, 2015 order and three applications for review of the November 2016 order were filed in the TCPA docket.  The Commission has not responded to these applications for review. Bais Yaakov of Spring Valley Appeal and Subsequent Orders.  In March 2017, the D.C. Circuit Court of Appeals ruled that the FCC lacked authority under the TCPA to adopt the “Solicited Fax Rule” (requiring opt-out language on faxes sent with the recipient’s prior express consent) and vacated the Anda order.  Bais Yaakov of Spring Valley, et al. v. FCC, 852 F.3d 1078 (D.C. Cir. 2017).  On November 14, 2018, the FCC’s Consumer and Governmental Affairs Bureau issued an order eliminating the FCC rule that required opt-out consent language on faxes sent with prior express consent (aka “solicited faxes”).  Rules and Regulations Implementing the Telephone Consumer Protection Act of 1991, Order (DA 18-1159).  The Bureau stated that the decision was required by the “non-discretionary mandate” of Bais Yaakov.  The Bureau also dismissed as moot 10 pending requests for waiver of the rules and two petitions for reconsideration of retroactive waivers previously granted by the Bureau.  However, the ten applications for review of the Bureau waiver orders (see above) are pending before the full Commission and could not be addressed by the Bureau on delegated authority.  On December 14, 2018, a group of TCPA plaintiffs filed an application for review asking the full Commission to vacate the CGB order.  Two oppositions to the application for review were filed on December 31, 2018.  The FCC has not yet responded to any of these filings.