Viagogo sells tickets for concerts, sport and theatre on its online ticketing platform. But it crossed the red line when it masqueraded as the ‘official’ seller of tickets, when it was only a reseller, and ‘hid’ its 27.6% booking fee until the time came for payment.

The ‘red line’ is the Australian Consumer Law and the consequences were a $7 million penalty, an injunction and a compliance program ordered by the Federal Court of Australia.

The contraventions of the Australian Consumer Law

The Court summarised viagogo’s business in this way:

“The viagogo Australian website is viagogo’s virtual shopfront in Australia. It is the place where consumers see what it has on offer and, by navigating through it, can learn about available tickets for specified events and then acquire them.”

Example – this is a screenshot of the “Delivery Page” which warns ‘only a few tickets left’ and displays a price per ticket of $135 (without the booking fee of $42.45 added). 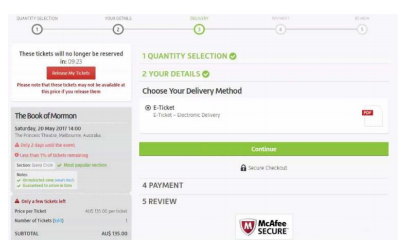 For my case note on the liability judgment see: Four internet marketing and price transparency lessons from the viagogo decision in the Federal Court

Penalties and other orders

The Court found that the contraventions were very serious. It made scathing comments on the cavalier approach viagogo took to its obligations under the Australian Consumer Law.

The Court took into account these factors in assessing penalties:

The cumulative total of penalties above is $7 million.”

The Court ordered that viagogo be restrained for five years from making representations of the kind that contravened the ACL.

The Court ordered that viagogo submit an ACL compliance program, and maintain and continue that program for three years.

The Court ordered viagogo to pay the ACCC’s costs of the proceedings.

The ACCC received 1,990 complaints in relation to the viagogo representations.

The high level of complaints the ACCC receives about online ticket sellers for events has led it to publish a special guide for consumers – Buying tickets online.

In that guide, the ACCC gives advice such as:

Viagogo deliberately deceived consumers and ignored the Australian Consumer Law. It is clear they knew what they were doing as their marketing exploited well know psychological flaws in consumer buying and decision-making behaviour.

Their marketing preyed on the heightened emotions consumers experience when purchasing leisure and entertainment opportunities online, namely FOMO (Fear Of Missing Out) and must buy (from viagogo as the only authorised ticket seller).

This marketing strategy is an abject failure. A simple Google search on the search term ‘Viagogo’ reveals an alarming number of ‘negative’ search results, including damning reviews on consumer feedback sites. Trustpilot.com rates viagogo a shockingly low score of 1.7 out of a possible 5 stars, calculated from approximately 31,000 consumer reviews. In addition, the viagogo Wikipedia page has dedicated sections on ‘Criticisms’ and ‘Legal and Government Actions’ which occupy 10 times more article space and word count than their ‘Business Model’ section.

International companies contemplating entering Australia must properly research and understand the local laws and regulations, in particular the Australian Consumer Law. The damage now done to the viagogo brand, which is based in Switzerland, is amplified by the $7 million penalty.  The damage could have easily been avoided by a proper understanding of and compliance with the Australian Consumer Law.

The cost of incurring the wrath of the Australian Consumer Regulator, the ACCC, the penalty, and the massive brand damage caused would pale into insignificance compared to a comparatively modest investment of obtaining the right legal advice from a specialist Australian legal firm with experience in the sector.