The “C-word” is very much back in vogue. After a brief hiatus while supervisory, regulatory and enforcement agencies scrambled to keep up with fast changing practices during the pandemic, the last few months have seen a marked uptick in references to the importance of culture. “[I]t all comes back to corporate culture” said Deputy AG Lisa Monaco in September, “culture is at the heart of how we supervise firms” echoed the FCA.

If that was a sample of what to expect, it seems like we are rapidly heading towards the main event. In the last week alone, the FCA has doubled down on its references to culture, first at a fireside chat during an event hosted by the Investment Association, and then again in a focused speech on culture in financial services.

Its clear, from a regulatory perspective, culture is here to stay. So how do firms engage with and measure their culture? Last week, we hosted a workshop with compliance colleagues in the asset management sector to discuss the challenges faced by firms in doing so. We started by creating a baseline, asking attendees how they defined culture. The breadth of responses shows just how multi-faced culture is. No wonder it is difficult to map and measure. 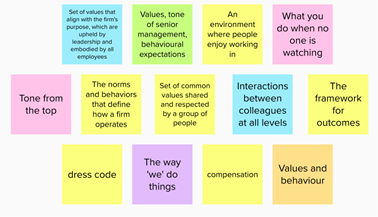 For what it’s worth, the FCA defined culture in their most recent speech as “culture as being the personality, habits and ethos of the organisation”, recognising that it can also be defined by “what you do when no one is watching”.

We then turned to the vast catalogue of options available to measure culture, in which the survey is often the tool that occupies the first page. But surveys are often poorly worded, and not created with visuals and insights in mind.

Not only are these methods rarely scientifically based, they can be rife with bias and lend themselves to survey fatigue and cognitive shortcuts. And using just this one method ignores the complexity of mapping culture within an organisation.

The FCA has recognised this in the DE&I context. So methods such as workshops, discussion groups, observational exercises and listening sessions also need to be utilised in tandem with carefully drafted surveys to help triangulate root causes and points for follow up. But what should you be analysing using your vast toolkit?

We discussed our use of the 4I’s framework to structure an assessment around a firm’s Ideas, Institutions, Interactions and Individuals. This translational tool allows us to acknowledge the complexity of culture while providing a structured set of components that all contribute to analysing culture. It means that no one factor becomes too important or is taken out of context.

Take policies for example. So many reviews focus on whether internal policies are saying the “right” things. As important as that is, it often becomes a tick box exercise.

Without a deeper analysis – for example, speaking to employees about incentives – you may miss that the compensation system, with its focus on stretch targets and year on year growth, may be giving the opposite message to the firm’s carefully drafted anti-bribery and corruption policy.

Adding to this view, behavioural researchers recently found that expectations about what is socially acceptable (“ideas”) and normative (“interactions”) played more of a role in shaping anti-bribery knowledge and behavior than did implementing a policy. While this is just one study, it provides much food for thought.

Capturing data, whether qualitative or quantitative, means little if you can’t visualise it and obtain actionable insights. And therein lies another art form – telling stories using data. For attendees at the session, this was a crucial factor to getting buy in for the culture assessment process in the first place.

Culture assessments are going to be the must-have of 2023. The ensemble of interacting factors that make up culture undoubtedly give rise to a huge amount of complexity. But once you have a baseline measurement in place, it becomes easier both to map the impact of targeted interventions and see new issues as they arise. And if and when the authorities come calling, you will have a story to tell.