In the last decade, a tremendous patent backlog has accumulated at the National Institute of Industrial Property (INPI), which has made the patent application system less appealing for potential applicants.

It is unsurprising that problems causing the backlog (eg, the lack of examiners and INPI’s lack of financial autonomy) are proving detrimental to the economy. According to the 2019 edition of the Global Innovation Index report, published on 24 July 2019 by WIPO (in partnership with Insead business school and Cornell University), Brazil ranks 66th on a list of 129 countries. It is behind all other nations in the association of Brazil, Russia, India, China and South Africa (BRICS), and has fallen two places since the 2018 report. Unfortunately, there is still a lack of connection in Brazil between the government, private sector and academy, which creates an atmosphere of uncertainty for R&D investments.

The patent backlog is expected to be, once and for all, on borrowed time. In order to solve this long-standing problem, INPI and the Brazilian Special Secretariat for Productivity, Employment and Competitiveness (part of the Ministry of Economy) launched a number of measures in July – named the Patent Backlog Combat Plan – to reduce bureaucracy and save costs and time, in the hope that this will reduce the effort required to examine patent applications and increase productivity.

This plan aims to reduce the patent backlog by 80% by 2021 and decrease the average time to reach a final decision (currently 11 years) to two years from the examination request.

Several measures have been introduced over the past few years that aim to reduce the backlog, including:

Based on abovementioned measures, INPI has been able to significantly reduce the patent backlog from an average of 11.5 years to a little more than eight years. As can be seen in Figure 1, the productivity per examiner has increased over the last four years because of these efforts. These results can be confirmed by the number of decisions on patent applications, which has increased from 15,842 in 2015 to 41,503 in 2018.

Figure 1. Number of decisions per examiner 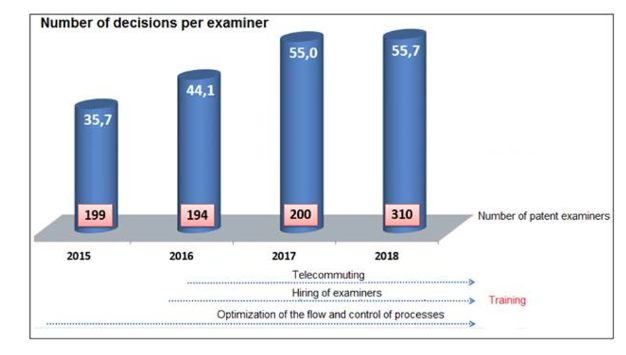 Despite all of the abovementioned measures, according to INPI’s official data report in June 2019, 157,432 patent applications (for which the applicants have already requested examination) were pending final decision. Since March 2019, INPI considers the amount of patent applications pending final decisions after the applicant’s examination request as backlog.

INPI’s 2018 Activity Report showed that the average timeframe for a decision on patent applications in Brazil was 10 years. Patent applications belonging to pharmaceutical and telecommunication fields have the first and second longest wait – about 13.13 and 13.04 years, respectively.

The plan to tackle the patent backlog

The plan was officially launched on 9 July 2019, under Resolutions 240 and 241, which establish the framework for preliminary office actions (INPI carried out a pilot project like the proposed plan in 2018, with positive results).

Resolution 240/19 foresees the issuance of preliminary office actions (under Code 6.22) related to patent applications that have not yet been examined abroad, wherein the prior art search will be conducted by an INPI examiner.

Resolution 241/19, in turn, establishes the issuance of preliminary office actions (under Code 6.21) for patent applications that have already been examined by a foreign patent office (approximately 80% of current pending applications in Brazil are included in this category), wherein INPI will recite the relevant prior art documents in the examination report.

The Patent Backlog Plan does not consider applications that have received third-party observations nor those for which have a priority examination has already been requested.

The present plan has the advantage of not requiring any change to legislation or additional costs for INPI, as well as maintaining the institute’s decision-making autonomy, which is a completely different scenario from the radical measures proposed in 2017 (the simplified granting procedure). Moreover, this plan is supported by a number of representative entities from different sectors of industry.

These preliminary results are promising and show that the plan is working. There is an atmosphere of optimism among stakeholders with regard to the plan that it may be the solution to this critical IP issue and can thus improve investments and answer companies’ uncertainties about doing business in Brazil.