Ireland's new anti-corruption legislation is now in force. The introduction of new corruption-related offences and tough penalties in the Criminal Justice (Corruption Offences) Act 2018 is expected to have a significant impact on corporates and other organisations operating in Ireland.

The Act was commenced by ministerial order on 30 July 2018.

The introduction of new anti-corruption legislation was one of the several measures proposed by the Government in its White Collar Crime Package announced in November 2017.

The Act repeals and replaces previous legislation on anti-corruption and bribery (the Prevention of Corruption Acts 1889 to 2010), consolidating Irish law on corruption into a single piece of legislation.

Under the Act, a company is liable for the actions of directors, managers, secretaries, officers, shadow directors, employees, agents or subsidiaries who commit a corruption offence with the intention of obtaining or retaining business or a business advantage for the company. If convicted, a company is liable to a fine of 5,000 on summary conviction or an unlimited fine on conviction on indictment.

A company can seek to defend a prosecution by showing that it took "all reasonable steps and exercised all due diligence" to avoid the commission of the offence. One would expect that in the event of a prosecution, a company's anti-corruption policies and procedures will come under scrutiny and may prove critical where a company is seeking to rely on this defence. Policies and procedures on their own may not be enough however, as was seen earlier this year in the UK's first contested prosecution of a company for failing to prevent bribery. The company in that case, a small company employing 30 people, had policies and procedures in place but the jury found that these were inadequate to prevent corruption. 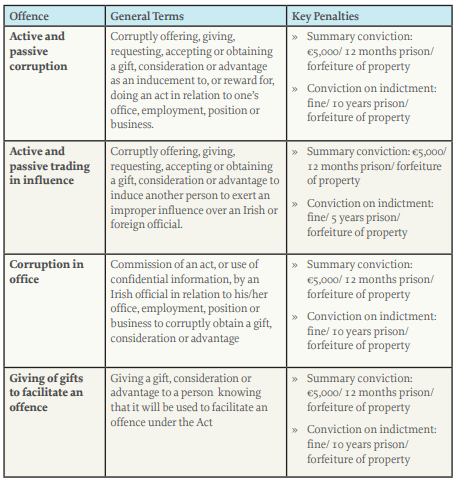 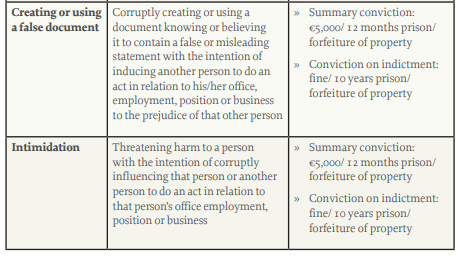 WHAT CAN COMPANIES DO TO MINIMISE RISK?

» Ensure all personnel receive training on these policies and on how to recognise and deal with suspected bribery.

» Discuss and review the effectiveness of the policies and procedures at Board level. Remember, ultimate responsibility rests with the Board.

» Appoint a compliance manager with day-to-day responsibility for implementing the policies, monitoring their use and effectiveness and updating them as necessary.

» Keep a written record of any gifts/ advantages given or received.

» Communicate your organisation's zero-tolerance approach on bribery to third party service providers, suppliers and other organisations with which you do business.