Significance of taking global view on prior art when assessing inventiveness

The Guidelines for Patent Examination sets out three scenarios in which prior art is generally perceived to contain technical teaching:

In patent invalidation proceedings, especially in the machinery field, a global view of the prior art is necessary when assessing the effect of a technical feature in deriving technical teaching of the prior art. This is because there is often a high level of synergy between multiple technical features in prior art. Where a party fails to achieve a global view, they run the risk of erring in their determination of inventiveness.

In a recent case, the owner of a Chinese patent for a culinary utensil invention sued an infringer, which retaliated by filing an invalidation request against the patent.

The patent in question concerned a cooking utensil comprising a food container and a blade, which were both relatively rotational. The core invention was that the blade comprised a turnover device, which caused the food to turnover in a specific direction under the action of the relatively rotational movement (ie, mainly along a radial direction). 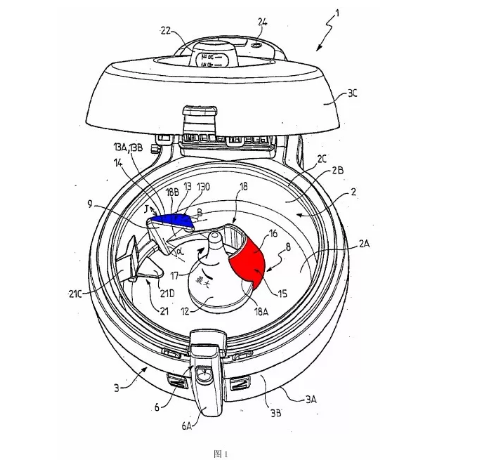 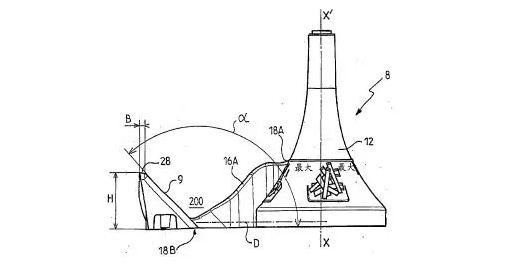 The subject patent description and the accompanying drawings embodied Claim 1. As shown in Figures 1 and 2 above, a blade (8) in Container 2 included a turnover device (13, the blue portion in Figure 1), which was displaced in the rotational direction relative to a front reflecting plate (16, the red portion in the above image). A groove (200) for food passage was provided between the turnover device (13) and the front deflecting plate (16). The illustrated turnover device was a bevel that inclined rearward and gradually narrowed in the direction (17) in which the blade rotated relative to the container. In use, the front deflecting plate blocked food and pushed it towards the turnover device. The food was moved over the turnover device, and the inclined bevel configuration allowed it to be turned over towards the centre of the container in a controlled manner (ie, mainly in a radial direction (D)). The turnover of food was controlled in this particular direction, which enabled the device to effectively stir food and achieve good technical effects (eg, uniform heating). 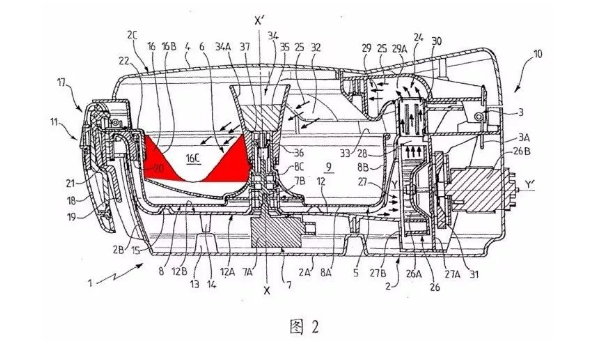 Figure 4: top view of blade covered by closest prior art

In the invalidation procedure and the subsequent administrative litigation proceedings, the dispute focused on:

One of the defendant's arguments in the invalidation procedure was that the general structure of the first portion of the blade was similar to the turnover device of the subject patent (ie, a bevel inclined rearward and gradually narrowed in the direction in which the blade rotated relative to the container). Therefore, the first portion of the blade of the closest prior art in combination with common knowledge achieved the same effect as the turnover device of Claim 1 of the disputed patent. Based on this finding, the technical solution of Claim 1 was found to be obvious compared with the closest prior art, which meant that there was no inventive step. The Patent Re-examination Board and the first-instance court therefore sided with the defendant and upheld the invalidation request.

In order to rebut the aforesaid argument, the plaintiff conducted research on the written description and drawings of the disputed patent and the closest prior art. Based on this research, the plaintiff drew a schematic diagram, comparison drawings and physical models, which demonstrated that when considering the closest prior art as a whole, the first and second portions of the blade worked in concert to block the food and allow it to pass through the transversally disposed V-shaped groove, rather than allowing the food to be primarily turned in a radial direction. It was therefore established that when taking into account the closest prior art as a whole, even though the first portions of the blades were somewhat similar, due to their different effects in the claimed invention and the prior art, a person skilled in the art was unlikely to obtain the technical teaching to combine the closest prior art with common knowledge to arrive at Claim 1 of the disputed patent. Thus, Claim 1 was non-obvious and involved an inventive step. The court of appeal agreed with this argument and dismissed the invalidation request.

This case may serve as a point of reference for assessing technical teaching. In practice – particularly in cases involving machinery – even though a structure extracted from prior art is identical or similar to a technical feature of a patent claim, a technical teaching could be erroneously derived if the structure's effect is considered based only on the extracted structure alone and not the effect that the structure achieves within the whole context of the invention.