The 50th annual World Economic Forum, hosted by the Swiss non-profit International Organization for Public-Private Cooperation, was held between January 21 and 24, 2020 in Davos, Switzerland (the “Forum”). The Forum was widely attended by political, business, academic, and cultural leaders and representatives from some of the world’s largest banking and investment companies. The focus of the 2020 Forum was on “Stakeholders for a Cohesive and Sustainable World.”

In advance of the event, the Forum published the 2020 Global Risk Report (the “WEF Report”), summarizing the results of the survey sent to its members to assess their perception of certain critical global risks.

The WEF Report analyzed responses from 800 members of the Forum’s extensive network of business, government, civil society and thought leaders. The Forum surveyed its multistakeholder communities, the professional networks of the Forum’s Advisory Board, and members of the Institute of Risk Management for their perception of the severity of listed global risks. For the first time, the multistakeholder community included 200 respondents from the “Global Shapers Community”, which is comprised of younger Forum constituents who are “driving dialogue, action and change.”

Also for the first time in the WEF Report’s 10 year outlook survey, climate concerns were listed in each of the top 5 “most likely” global risks. In order, these included: (1) extreme weather, (2) climate action failure, (3) natural disasters, (4) biodiversity loss, and (5) human-made environmental disasters. Three of the five “most impactful” global risks were also climate-related concerns. “Failure of climate change mitigation and adaption” was considered the number one risk by impact and the risk second most likely to occur over the next 10 years. Other categories that topped the ranks in prior years were weapons of mass destruction, infrastructure breakdown, chronic disease, income disparity, and fiscal imbalance.

The younger constituents in the Global Shapers Community shifted the focus of the 2020 Forum survey results from previous years’ results, which the Forum attributes to that generation’s tendency to “spotlight issues, particularly relating to climate change, that it sees as existential risks not only to its generation but to the wider global community.” 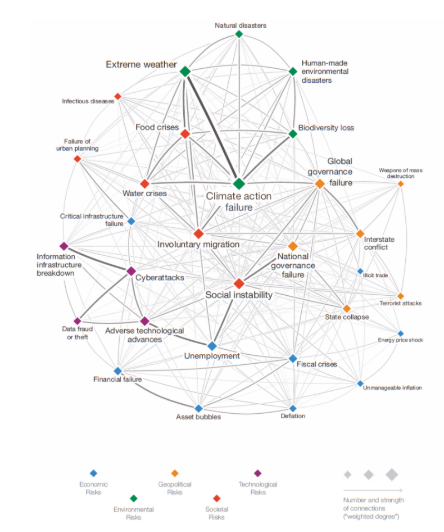 The 2020 survey respondents were concerned over stalling global economies, heightened political instability, cybersecurity, and escalation of trade and shipping rivalries, especially in the Arctic. The interconnection among these issues is depicted in the Global Risks Interconnections Map (see Figure 1).

As the Forum historically focuses on economic concerns, the WEF Report highlighted climate change’s impact on the world economy and warned that nature-related risks were undervalued in business decision-making. Economic losses from natural disaster damage alone totaled US $165 billion in 2018, of which 50% was uninsured.1 Climate change concerns are also intertwined with other economic and public health crises, including crop yield decline, reduced fish stocks, human migration, and the spread of infectious diseases. Over 200 of the world’s largest firms estimated that non-action on climate change would cost them a combined total of nearly US $1 trillion.2

While the WEF Report encouraged business to account for ecological risks to their operations and reputations, the WEF Report noted the current gap in accountability, even for voluntary, self-imposed goals. A recent survey of the sustainability reports of the Fortune 100 companies found that nearly 50% mentioned “biodiversity” in their sustainability reports, but only 5 companies established measurable, time-bound targets to address their impacts.3

Also in advance of the Forum, PwC released its 2020 Global CEO Report summarizing the results of its survey. Unlike the WEF Report, which included constituents of all ages across government, business and civil society, the PwC survey focused only on corporate executives, who are traditionally an older demographic, but geographically diverse. Over 1,581 chief executives in 83 territories participated in the survey.

PwC found that climate concerns were not included in the list of the top 10 threats to business growth that the CEOs identified. These issues were outranked by concerns over trade conflicts, overregulation, unskilled workers, and political populism.

Between the 2019 and 2020 survey, the share of CEOs citing climate change and environmental damage as an “extreme concern” to an organization’s growth prospects rose from 19% to 24%, while uncertainties over economic growth jumped from 24% to 34% and overregulation concerns remained near-constant at 35% and 36% in the surveys, respectively.

The CEOs focused on the opportunities that climate change may present. As compared with 2010 survey results, 2020 respondents were twice as likely to “strongly agree” that investing in climate change initiatives would both boost reputational advantage among key stakeholders, including employees, and provide significant new product and service opportunities. However, only 14% of CEOs in 2020 believed that they would benefit from government funds or financial incentives for ‘green’ investments, although this number had increased from 5% in 2010.

Similar to the differences in climate concern identified by the broader stakeholders surveyed in the WEF Report and the corporate executives surveyed in the PwC report, the Forum’s speakers underscored this difference in opinion on the breath of impact and urgency that climate change demands may present.

During a panel discussion at the Forum, Christine Lagarde, the president of the European Central Bank, emphasized the need to include climate risks into long-term economic forecasts, and encouraged both pricing the cost of a transition to a low carbon economy and increasing pressure on companies to disclose their exposure to climate crisis risk as a means to expedite the transition. Lagarde mentioned the announcement that BlackRock, the world’s largest asset manager, would now make investment decisions with environmental sustainability as a core goal, as an example of companies’ increased concern over climate impacts on their bottom line.

In contrast, Steve Mnuchin, the US Treasury Secretary, argued that forecasting the cost of environmental protection was not possible and that given the difficulty in pricing climate risks, costs were being over-estimated. He warned that a carbon wax would ultimately be a tax on the working classes. Instead, he suggested that the solution to reducing carbon emissions lies in technology improvements, with costs of climate action expected to be “much lower 10 years from now.”

The Forum acknowledged the significant challenges that governments and businesses will face in the coming years from a broad array of interdisciplinary issues, but highlighted the opportunities in technology innovation and capital markets that a low-carbon economy transition may bring.

The WEF Report asserted a need for immediate, collective governmental action to address the key risks identified in its report,4 although speakers at the Forum differed in their concern over climate change and the means, if any, with which to address such risks.