There are a small number of companies that earn a unique global status for the work they do. These companies become household names and are recognised the world over through their brands.

In this 2nd instalment of Brand Breakdown, we look at Tesla, the innovative automotive manufacturer – and how its brand and registered trade marks support their mission.

(This instalment follows the inaugural brand breakdown which focused on Under Armour’s category disrupting brand).

Tesla Inc.’s journey began 15 years ago when it was founded in 2003 in San Carlos, California, United States.

Co-founders Martin Eberhard and Marc Tarpenning developed an all-electric two-seater car propelled by alternating electrical current (AC). This led them to the belief that electric cars had the capability to become a scaleable and necessary future for human transport.

They decided to start a car company calling it ‘Tesla Motors’ (which would later become Tesla Inc.).

A year later, on the 24th April 2004, Tesla Motors received the Series A funding efforts from Elon Musk the CEO of SpaceX – a company Musk had founded earlier in 2002. After initially performing the role of chairman – Musk would become heavily involved in the company from 2008 onwards as CEO.

Initially, the company focused on the niche sports-car market with the production of the Tesla Roadster. This car which acted as proof of concept and has since led to a focus on producing an affordable mass market sedan in the form of the “Model 3”.

15 years on, Tesla has grown considerably and in 2014, Morgan Stanley called it “the world’s most important car company”.

Tesla now not only builds all electric vehicles but is also actively involved in scalable clean energy generation and storage products which support this aim (e.g. Musk’s SolarCity). As such, the company, whilst producing electric vehicles is also an active pursuant of systemic and infrastructural changes that will usher in a more sustainable future for human transport.

Since being founded, the company has risen to a market capitalisation of around $48 billion and the brand’s moves continue to draw daily attention.

The first two marks protect Tesla’s principle assets, in machinery (class 7), electrical and scientific devices (class 9) and vehicles (class 12). Where as the mark graphics of the word mark only protects their identity of their assets in vehicles (class 12).

When looking at a brand, a distinction should be made between:

In the case of “Tesla” there is some what of a difference between the products that it produces (electric cars and the infrastructure for them to be adopted en masse) and the meanings the brand produces that coincide with this.

The co-founders used the name ‘Tesla’ to pay homage to Nikola Tesla (1856-1943), the Serbian-American inventor and electrical engineer.

‘Without Tesla’s vision and brilliance, our car wouldn’t be possible. We’re confident that if he were alive today, Nickola Tesla would look our 100 percent electric cars and nod his head with both understanding and approval’.

Nikola Tesla, was a pioneer in electrical engineering and developing the alternating current (AC) which would be subsumed by Thomas Edison’s direct current (DC) in the “War of the Currents”. This “war” famously leading to Edison bizarrely zapping an elephant in efforts to prove that AC was unsafe (even though DC would have had a similar lethal effect).

As a historic figure with a “rags-to-riches-to-rags” story, Tesla, whilst misunderstood in his time, is now regarded as a genius noted for especially eccentric out-of-the-box thinking.

Bearing all of this in mind – the name offers the company some favourable significations: 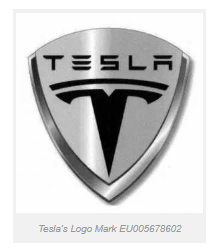 Tesla’s logo mark consists of a graphical representation of it’s word mark (as below) a “T”-shaped graphical glyph on a crest. This crest also has a “3D” gradient applied to it. This “T” appears (minus the badge and word) appears on each Tesla car as it’s crest or emblem.

Many in the past have theorized what the “T” might resemble. This mystery was solved when Musk stated in 2017:

“Similar to SpaceX, the T is like a cross section of an electric motor, just as the X is like a rocket trajectory” – 19th of Jan 2017

This was demonstrated by a respondent to Musk’s message who shared the image below found on an earlier Quora post theorizing about the logo.

Notably, this is not something that would be immediately obvious to the public upon viewing – who would simply see a stylised “T”. Thus it’s more of an “easter egg” for electrical engineers and enthusiasts.

To the lay person however, the stylisation of the “T” glyph however, carries some implicit meaning, as it can be seen to display both animalistic e.g. like a fang, or claw; or futuristic qualities.

The overall inference that can be taken from either of these (and that it is in fact based on the cross-section of an electrical motor) is a sense of dynamism.

Any way you read it, this connotation of dynamism goes naturally with the brand in its actions as a corporate entity as we as in the products the company sells.

Unlike the logo “T” glyph this has solely “futuristic” connotations.

This is achieved through use of negative space and the assembly of a set of standard graphical components – namely equally weighted vertical lines, and horizontal lines with hewn edges.

Each glyph is composed of identical elements, save for the “S” which features an inverted horizontal element at the bottom (this was likely chosen to create a sense of visual balance across the entirety of the configuration).

The subtle way that this comes across as futuristic at a glance is because:

All of these factors are consistent with a minimalist aesthetic – which itself has become implicitly associated with utopian futuristic associations.

Few in the automotive sector opt for such a futuristic feel with their brand elements. And those that do (e.g. Honda, Lexus and Audi) do not follow this aesthetic as closely as Tesla do.

The sum of all of this is a high degree of congruity between Tesla’s registered trade marks (brand assets), it’s products and broader business activity. (And not to forget Elon Musk’s personal brand and activity – which is inextricably linked to the fortunes of all his ventures).

The brand message reinforces the actions of the company (and vice versa) – which is the most favourable way to build brand value and reputation. Note this is why bad news, or company activity that goes against the proposition driven by the messaging can be a big blow. Which is why companies do everything they can to protect and fulfill the promise set out by their brand.

As such, Tesla may be seen as an exemplar of a company whose brand elements are strong – but who also “walk the walk” when it comes to presenting an exceptionally dynamic and futuristic brand.