The Strict Limits of 3 U.S.C. § 121’s Safe Harbor Provision (And the Intersection of Two Blogs)

Patent litigation often involves the intersection of practice before the PTAB and district courts. Not surprisingly then, the subject of this post—the Federal Circuit’s recent opinion concerning the reexamination of U.S. Patent No. 6,284,471 (“the ʼ471 patent”)—directly relates to a litigation analyzed on our firm’s companion blog, BiosimilarsIP.com. See here and here.

In re Janssen Biotech, Case No. 2017-1257 (Fed. Cir. Jan. 23, 2018), concerns an appeal from the PTAB addressing obviousness-type double patenting and the limits of 35 U.S.C. § 271’s safe harbor provisions. For present purposes, the district court litigation is relevant because the court, like the PTAB, concluded that the ’471 patent was invalid for obvious-type double patenting in view of U.S. Patent Nos. 5,656,272 (“the ʼ272 patent”) and 5,698,195 (“the ʼ195 patent”), two patents that descended from the same parent application as the ’471 patent. The Federal Circuit provided the helpful graphic below to assist in understanding the prosecution history culminating in this appeal. 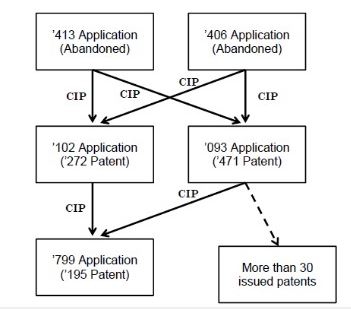 The issue on appeal was the application of Section 121’s safe harbor provision and whether it “protected” the ’471 patent from the ’272 and ’195 patents. That statute, the Federal Circuit explained, is to be applied strictly, and “by its literal terms, protects only divisional applications (or the original application) and patents issued on such applications. Accordingly, patents issued on CIP applications are not within the scope of § 121.” Slip Op. at 9 (citations omitted). Looking to the diagram above, it is clear that the ’271 patent does not meet these requirements, as it was designated a continuation-in-part (“CIP”) from two separate applications. The novel issue on appeal then was whether the patent owner could “retroactively bring the challenged patent within the scope of the § 121 safe harbor by amending the CIP application during a reexamination proceeding to redesignate it as a divisional application.” Slip Op. at 10. The Federal Circuit concluded that a patent owner could not, affirming the PTAB’s determination.

The Federal Circuit’s analysis was grounded first and foremost in the strict language of the statute. Once a patent issues on a continuation application, it cannot have “issued” on a divisional application. To receive the benefit of the safe harbor provision, the application must be designated as a divisional “at the very latest” by the time the challenged patent issues. While the statutory language settled the matter, the Court also briefly addressed Janssen’s policy-oriented arguments. For example, Janssen argued that it had not actually “benefitted” from its designation as CIP from the two applications. The Federal Circuit disagreed, noting that “more than thirty patents” had issued claiming priority through the ’471 patent. Slip Op. at 13. Finally, the patent owner pointed to practices before the Patent Office which allegedly permitted patentees to designate applications as both a CIP and a divisional. The Court declined to address whether these practices were permissible because Janssen did not follow them here.