I. Established promotion of renewable energy

Companies around the globe are increasingly active in procuring or investing in self-generation of renewable energy. So-called corporate sourcing of renewable electricity is a still growing global trend and driver of renewable energy growth. Several main driving forces behind this development can be identified: The reduction in the costs of renewables, pressure by consumers and other stakeholders on companies to become more environmentally friendly and to reduce the own carbon footprint as well as the increasing meaning of corporate sustainability among investors just to name a few. While some companies very early on reacted to the trend of "going green", implicitly accepting that becoming or being green is not necessarily just a cost of doing business, for others, becoming environmentally friendly seems to be a somewhat longer process.

As for example the first German Renewable Energy Law (EEG) came into force, the established promotion of renewable energy has been characterized by the payment of a given sum in Cents per kWh produced over a period of support of 20 years. Even though the specific terms for support have varied over the years (e.g. feed-in tariff, financial support, market premium, applicable value) the underlying concept of promotion has remained the same. There is, however, a growing call to put an end to public subsidies for renewables requiring that they present themselves to the market. The aim is to let the renewable energy sources establish themselves on the market without any public support and to subject their profitability to the law of supply and demand.

The market itself is already creating models for the project development of subsidy-free renewable energy installations, in Europe and abroad. This evolution will not only affect future installations to be commissioned in forthcoming years. It also concerns existing installations for their revenues after expiration of the legal period of remuneration. While the EEG in Germany, as well as similar laws in other European countries, was designed to promote renewable energy, corporate sourcing of renewables now seems to have a similar potential to attract significant additional investment in the renewable sector. At the same time, it might be able to support the energy transformation and help reaching international climate targets. Corporate Power Purchase Agreements (Corporate PPAs) that may come in different forms are the most prominent example of recent corporate sourcing activities.

The development of Corporate PPAs for the financing of renewable energy sources has been most notable in the US in the past years. This is due to the fact that unlike Germany, the US has a support scheme for renewables based on tax exemptions (so-called Production Tax Credits). The number of Corporate PPAs in the US has thus been growing rapidly. While the AMER region (North, Central and South America) still accounts for the largest share of Corporate PPAs concluded, they are also increasingly used in EMEA (Europe, Middle-East and Africa) and APAC (Asia Pacific) regions.

If renewable energies were no longer entitled to subsidies in the future, producers would always have the option of selling their electricity output in the wholesale market at market prices. However, they would then be exposed to the forces of supply and demand and to correspondingly volatile prices. A Corporate PPA, on the other hand, would stabilise both the electricity output sold and the price to be achieved.

1. Why do companies conclude Corporate PPAs with power producers?

From the client's perspective, there are two main reasons for concluding a Corporate PPA. First, economic considerations are crucial because companies are striving for the greatest possible price stability and therefore do not want to expose themselves to the possibly highly volatile procurement costs on the electricity markets. Alongside this economic component, "green" factors are important as well, as many companies are increasingly

striving to partially or entirely minimise their CO emissions by purchasing green electricity. This second aspect has recently been observed in the case of several large tech companies, for example, which wish to give their firms an image of sustainability by concluding Corporate PPAs - in some cases covering their entire electricity requirements - and thus present themselves to their customers as "first movers".

2. What are the different variants of Corporate PPAs?

Typically, two variants of Corporate PPAs can be distinguished. In the case of a physical Corporate PPA, a contractually defined quantity of electricity is supplied directly from the producer to the consumer over a contractually defined period (e.g. ten to twenty years) from a power plant built for this purpose. This can be done via a direct line or via the electricity transmission / distribution grid, which in turn has an impact on the grid fees to be paid. Physical Corporate PPAs also have two subtypes: the producer can assume the role of a classic supplier with all the associated full-service obligations (direct Corporate PPA) or it can seek support of an established supplier, which in turn assumes tasks such as the provision of balancing energy or load forecasting (sleeved Corporate PPA).

In addition to physical Corporate PPAs, so-called virtual or synthetic PPAs have developed. This is a financial product that does not include the physical supply of energy. It has become more widespread internationally due to a greater flexibility (e.g. the ability to supply several locations). Under a virtual or synthetic Corporate PPA, the parties agree on a fixed price ("strike price"), but both producer and consumer sell or buy their electricity on the spot market. If the spot market price is above the agreed fixed price, the producer reimburses the difference to the consumer and if the spot market price is below the agreed fixed price, the consumer pays the difference to the producer.

Such an arrangement can therefore be described as a classic Contract for Differences (CfD). With regard to pricing, a large number of options are conceivable, depending on the preferences of the parties. Fixed prices, minimum prices, take-or-pay obligations, indexing, price floors and price caps can be considered, in order to best reflect the commercial interests of both parties.

In addition, both parties can hedge their position at the same time on the futures market. Theoretically, Corporate PPAs can be hedged with futures of up to a maximum of six years, although in practice, due to limited liquidity for such products, hedging is often only possible for approximately three years. For periods beyond this, an assessment can be carried out on the basis of electricity price scenarios. However, this requires sufficient resources and in-house experts or the use of external expertise. For example, one can imagine a scenario in which the parties to a contract with a term of ten to twenty years agree that the producer will initially receive a price above the current market level but that the later electricity price will then be below the expected market level.

3. What are the legal challenges related to Corporate PPAs?

In addition, the price mechanism requires special attention, as a large number of options are possible to reflect the commercial interests of the parties, as referred to in section 2. In legal terms, it must be pointed out that there is full freedom of arrangements for contracts subject to German law, if the relevant clauses have been negotiated in detail and are therefore not subject to any restrictions under the law applicable to General Terms & Conditions (AGB). However, as the price mechanism is generally one of the core provisions of the agreement, this hurdle is likely to be overcome in most cases.

4. What is a realistic timeline for the conclusion of a Corporate PPA?

Assuming that the producer has already found a buyer during the project development phase and that the has already defined a corresponding project and as a result the requirement profile for the Corporate PPA, a period of approximatively three to six months as of signing of the Letter of Intent is likely to be required for the topics of financing, contract negotiations, planning and approval. In the case of a physical Corporate PPA, a further period of three to six months should be taken as a basis for the actual construction of the plant and its grid connection. After commissioning of the plant, the actual period of electricity generation typically amounts to a period of ten to twenty years. In this respect, it is up to the negotiations between producer and consumer to decide on the contract term for a Corporate PPA. Especially long-term Corporate PPAs need specific legal advice.

5. At a glance: pros and cons of Corporate PPAs for producer and client

The benefits and disadvantages of Corporate PPAs can be very succinctly summarized as follows for both contracting parties: 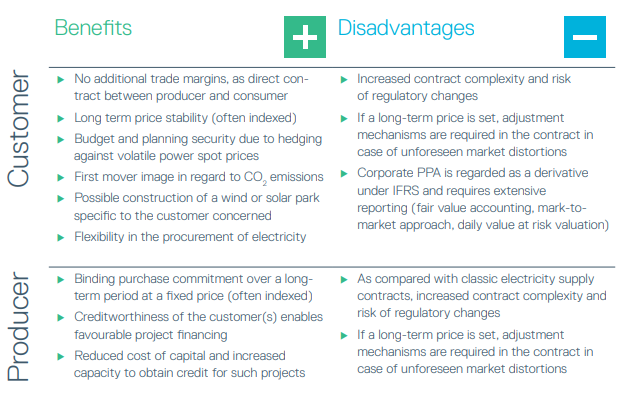