In this note we look at how the GloBE rules approach business restructuring. While the GloBE rules start by determining an entity’s profits and losses by reference to the financial accounting position, there are special rules that depart from that where transactions take place between entities in the same group.

As in many domestic tax systems, this recognises that intra-group transactions take place within a single overall economic organisation, and that it may be appropriate to defer taxation of gains until they are realised on a sale to a third party.

We have focused on intra-group transactions; however, the same issues may be relevant to M&A transactions between unconnected parties. 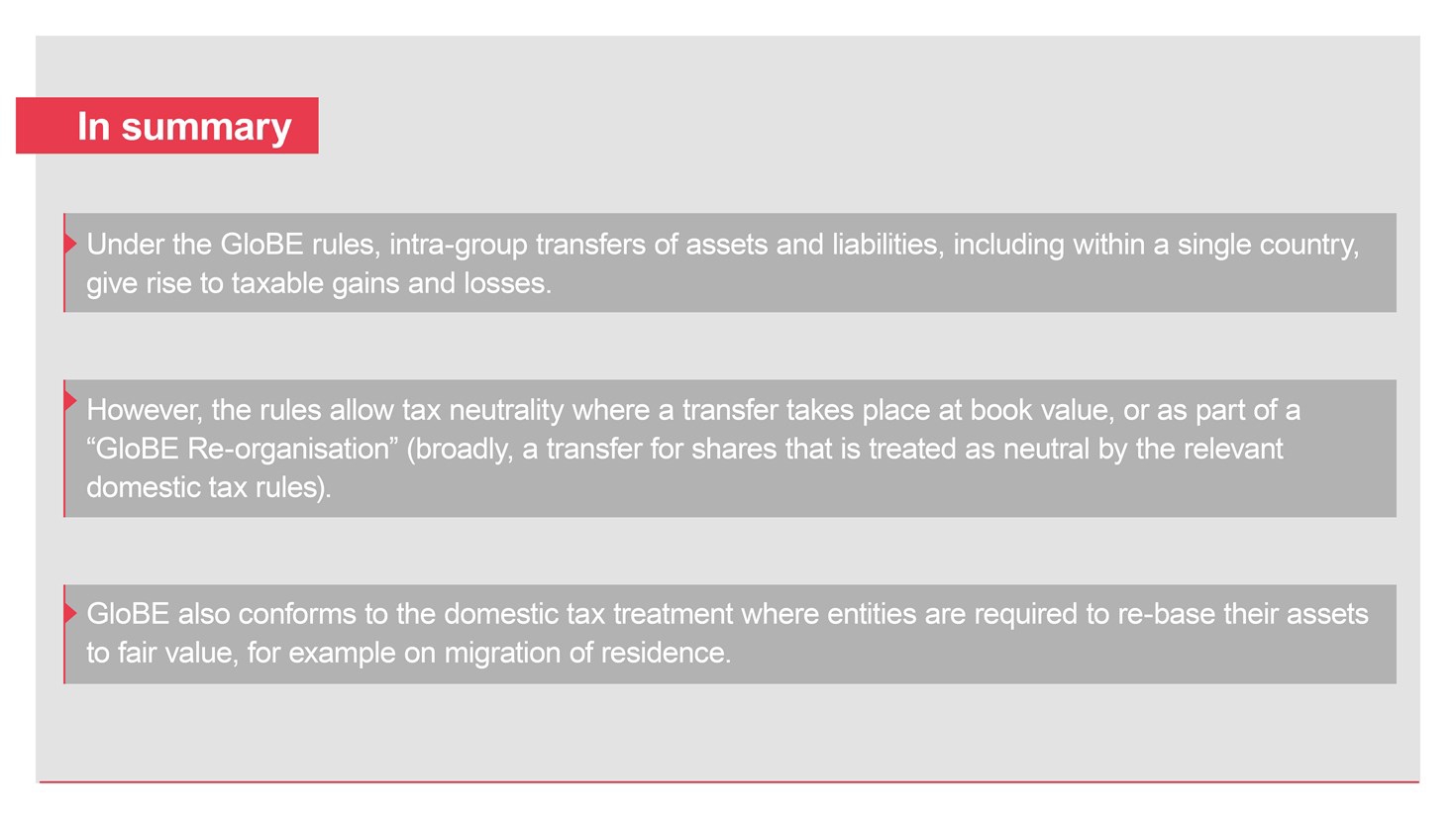 The GloBE rules treat intra-group transfers of assets and liabilities – including transfers of going concerns – as taxable events.

That means the disposing entity includes the accounting gain or loss recognised on the transfer in its GloBE income. Likewise, the acquiring entity’s future GloBE position is determined using the carrying values recognised in the group’s accounts on acquisition. This is the case irrespective of whether the transfer is cross-border or occurs within a single jurisdiction.

In contrast to the UK’s domestic chargeable gains and intangible fixed asset (IFA) regimes, the GloBE rules do not include a general rule requiring transactions between connected parties to be adjusted to market value. Where the GloBE transfer pricing rule applies – to cross-border transfers and intra-jurisdiction transfers at a loss – the transactions in question must be priced on arm’s length terms. However, where a transfer takes place within a single country at book value or at consideration that results in an accounting gain, the accounting treatment will be respected.

The rules include the concept of a GloBE reorganisation. This is a transfer of assets and liabilities where:

The Model Rules allow gains arising on a GloBE Reorganisation to be deferred, in line with the domestic tax treatment.

Where the consideration is entirely shares and there is no domestic tax charge on the vendor, the vendor excludes its gain or loss from its GloBE income and the acquirer inherits the vendor’s base cost. The transfer is therefore tax neutral, with any gain deferred until the subsequent disposal of the assets by the vendor. This recognises that, where a business is sold for shares, the vendor may not have sufficient cash to pay an immediate tax charge.

Transfers that do not meet the definition of a GloBE reorganisation – say because shares are an insignificant part of the consideration or because the domestic tax rules do not allow deferral – are subject to the core rule described above, and therefore taxable.

Together with allowing transfers to take place at book value, the rules on GloBE reorganisations will often allow intra-group restructuring such as the hive-down of a business prior to its sale to a third party to take place effectively on a tax-neutral basis, as is typically the case under domestic tax rules.

There is a special rule that applies to intra-group asset transfers that occur between 30 November 2021 (i.e. shortly before the Model Rules were published) and the point that a group first becomes subject to the GloBE rules. Such transfers are treated tax-neutrally, with the transferor’s carrying value becoming the acquirer’s base cost. This rule is aimed at preventing group’s from stepping-up the value of their assets before the GloBE rules take effect in order to obtain increased depreciation deductions, or reduce gains on disposal.

Sometimes entities re-base their assets or liabilities to their current fair value for tax purposes. That can be where a tax charge is imposed on unrealised gains at the point an entity migrates its residence or joins or leaves a group. It can also be voluntary, where the domestic tax system allows the entity to elect for re-basing. Where this happens, the entity recognises an immediate gain or loss, and its tax basis in the assets is then adjusted for the future (for example increasing or decreasing the amount of depreciation or amortisation allowances it can claim).

The GloBE rules allow an entity that is subject to re-basing for domestic tax purposes to elect for the same treatment under GloBE. Entities have flexibility over when the gain or loss on re-basing is recognised: it may be brought into account entirely in the year of the triggering event or spread out over five years.