Australia is a confirmed attendee of COP26. To date, Australia has developed and implemented a series of climate change-related policies which focus on a transition away from fossil fuels towards renewable technologies.

Australia is a confirmed attendee of COP26. To date, Australia has developed and implemented a series of climate change-related policies which focus on a transition away from fossil fuels towards renewable technologies.

Net Zero through development of renewable or low emission technologies

Australia is a signatory to the Paris Agreement and ratified its commitment on 9 November 2016.1

Under the Paris Agreement, in 2015 Australia first communicated its commitment in its Nationally Determined Contributions (NDCs) of reducing greenhouse gas emissions by 26 to 28% below 2005 levels by 2030 and has indicated that post-2030 targets can be communicated in its next NDCs in 2025.2

The Australian Government has not committed to Net Zero 2050 but framed Australia’s commitment to the IEA COP26 Net Zero Summit held on 1 April 2021 (Aus time) as:

The Australian Government is firmly committed to getting to net zero as soon as possible and preferably by 2050.3

Noting the use of ‘preferably’ in the above statement, the Australian Government’s position is that it is committed to reaching Net Zero, but not necessarily by 2050.

The Government’s current policies are often framed by reference to policy goals of also preserving economic prosperity, energy security or energy affordability. The policies are aimed to stimulate rapid development of low emissions technologies, to bring these technologies to ‘cost parity with existing approaches’.4 To put it simply, through development of renewable or low emission technologies, they will become increasingly competitive and therefore economics will drive increasing uptake over time.

To that end, in 2020 the Australian Government released its Technology Investment Roadmap (Roadmap), which reiterates that ‘Government will continue to invest in mature technologies where there is a clear market failure, like a shortage of dispatchable generation, or where these investments secure jobs in key industries,5 and goes on to outline the strategies for investment in new technologies expected to contribute to transition to a lower carbon economy.

The Roadmap makes it clear that the Government’s priority driver of change is and will be an investment and incentives framework. The Government expects it will invest over $18 billion in low emissions technologies this decade to 2030.6 The research and development strategy recognises that the private sector will place a primary role in widespread deployment of the strategy.7 The Government will seek to leverage between $3 and $5 in new co-investment for every dollar it invests, on average, in low emissions technologies.8

The Government has reiterated that its ‘approach to regulation will respect consumer choice and trust households and businesses to adopt new technologies as they approach parity.’9

The Roadmap includes the following “Stretch Goals” for priority low emissions technologies, with $60 million funding now allocated for research and development projects of use in achieving these goals now set out in Regulations under the Australian Renewable Energy Agency Act 2011:

As part of the Roadmap, Australia is targeting international partnerships that support the goals included in the Roadmap, in particular relating to research, development and ‘deployment challenges for economically important, hard-to-abate sectors’.10

Australia has entered into an Memorandum of Understanding with Singapore to advance cooperation on low emissions technologies and solutions, in particular in relation to: hydrogen, carbon capture utilisation and storage, renewable energy trade, measurement, reporting and verification of emissions.11

Australia is also collaborating on developing low emissions technologies with the US, Germany, Korea and the UK.12

Approach of Australian States and Territories

Notwithstanding the lack of specific targets at national level, each of Australia’s States and Territories has taken its own approach to setting policy or targets relating to emissions reduction, energy efficiency and net zero, summarised in the table below: 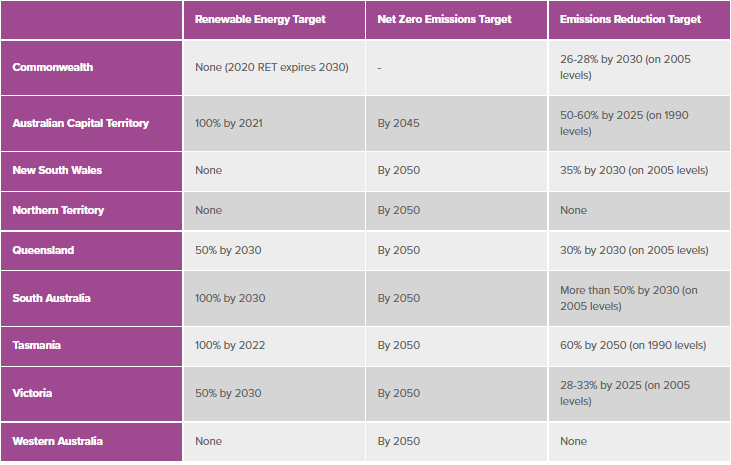 Some States have developed, or are developing, adaptation and resilience plans, with risk assessments and decision making guidance for specific sectors of the economy.

There have also been increasing expectations in the Australian legal and financial landscape for businesses to disclose climate change-related risks.

While there are no specific regulations for climate-related risk disclosure in Australia, listed companies are required to report on their business strategies and prospects for future years in their annual report including with respect to their material business risks. This includes climate-related risks where material to the business. Companies listed on the Australian Securities Exchange are also recommended to disclose, on a “comply or explain” basis, their material exposure to environmental and social risks.

Increasing expectations around disclosure of climate-related risks have also been reflected in a number of recent outputs by Australian regulators. For instance, earlier this year, the Australian Prudential Regulation Authority released draft guidance to banks, insurers and superannuation trustees on managing the financial risks of climate change. At the same time, the Australian Securities and Investments Commission has undertaken market surveillance to assess whether significant Australian listed companies are providing an appropriate level of disclosure regarding climate-related risks and whether public disclosures are affected by “greenwashing” either by overstating an organisation’s commitment to emissions reduction, or indicating that products such as financial products are more ‘green’ than can be objectively substantiated.

In the context of clear indications from regulators that companies should be proactively considering potential climate-related risks, there has also been an increased focus on directors’ duties with respect to climate change. While directors’ duties in Australia are unchanged, the increasing disclosure of, and appreciation for, relevant climate-related risks has in turn raised the standard expected of directors in exercising their duty of care and diligence. Specifically, where directors identify climate-related risks which are material to their business, they will be expected to take steps to respond to and, where practicable, mitigate those risks.

Unlike some overseas jurisdictions, directors duties in Australia are owed to the company (not its current shareholders). This typically requires consideration of the best interests of the company through the prism of the interests of its current and future shareholders as a whole, which caters to decision making promoting the long-term sustainability of the business. This has been an important facilitator for companies’ investment in carbon transition activities and longer term climate-commitments and strategies.