On February 14, 2019, the Illinois legislature passed SB 1, the “Lifting Up Illinois Working Families Act,” which raises the state’s minimum wage, in increments, to $15 per hour by 2025. If Governor JB Pritzker signs the bill (as is expected), Illinois will become the fifth state to pass a statewide increase in the minimum wage to $15 per hour, joining California, New Jersey, New York, and Massachusetts.

Increases for Regular and Youth Wage

Under SB 1, the minimum wage is scheduled to increase with a series of hourly rate adjustments over the next five years to achieve the $15 hourly pay rate. For workers at least 18 years old, hourly rates will go from $8.25 to $9.25 per hour, beginning on January 1, 2020. After six months, the hourly minimum will increase to $10 per hour through the end of 2020. Thereafter, the minimum wage will go up one dollar per hour the first day of each year until it reaches $15 per hour on January 1, 2025. 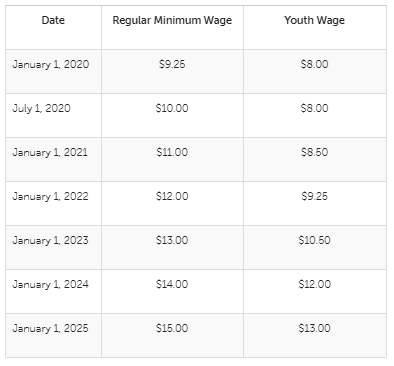 Employers in Chicago are already familiar with minimum wage step increases. On December 2, 2014, the city passed a minimum wage ordinance that raises the minimum wage for Chicago workers to $13 per hour by July 1, 2019, with increases tied to the Consumer Price Index thereafter. Therefore, employers with employees working in Chicago should be mindful of both sets of requirements.

The bill also includes tax credits to help smaller businesses offset increased wages. Employers with 50 or fewer employees will be able to claim a tax credit corresponding to 25% of the increased cost of wages paid from January 1, 2020 through December 31, 2020. This tax credit is then phased out over the course of the scheduled wage increases. It will reduce to 21% of the increased cost of wages in 2021, down to 17% in 2022, to 13% in 2023, then to 9% in 2024, and finally to 5% in 2025. The 5% credit will still be available for the year of 2026 for those employers with more than five employees and through 2027 for employers with no more than five workers.

SB 1 also strengthens the enforcement provisions for violations of the minimum wage rules. For example, if employees prevail in a claim for recovery of lost wages under the minimum wage law, they will be entitled to treble the amount of corresponding underpayments as damages, in addition to court costs and attorney’s fees. The bill also adds new fines for employers that recklessly, willfully or repeatedly disregard the wage requirements. Employers not in compliance could be liable for a fine of $1,500, payable to the Illinois Department of Labor Wage Theft Enforcement Fund. Another penalty added in SB 1 will levy a $100 per employee fine against any employer that did not keep proper payroll records, also payable to the Illinois Wage Theft Enforcement Fund.

Increasing the minimum wage was one of Governor Pritzker’s campaign promises. He confirmed his enthusiastic support for the measure in a statement on February 14, 2019, with a promise to sign the bill “in days to come.”

Employers with employees working in Illinois should consider the impact of SB 1 on their payroll and budget, and plan for any changes to recordkeeping it may require.