With a “no-deal” scenario looking increasingly more likely, what steps should businesses be taking in relation to their data protection compliance regimes to prepare for 31 October this year?

The data protection framework in the UK post-Brexit

The EU General Data Protection Regulation (the “GDPR”) is the principal piece of data protection legislation across the EU. On exit day, the provisions of the GDPR will be incorporated into UK law by the European Union (Withdrawal) Act 2018 (the “Withdrawal Act”) and the GDPR will therefore remain the core law on data protection in the UK (subject to amendments to make the mechanics of the legislation work in light of the UK’s new status). Therefore, there will be no immediate change in respect of the data protection framework in the UK. In essence, post-Brexit there will be two versions of the GDPR – the existing EU version and a new UK version.

The GDPR permits a free flow of personal data between EEA member states. Transfers out of the EEA are, however, only permitted in specified circumstances.

EEA to UKWhen the UK ceases to be an EU member state it will become a "third country" for the purposes of the GDPR and this free flow of personal data will therefore no longer be permitted unless one of the specified circumstances applies:

The UK government has made it clear that it is aiming for an “adequacy decision” to be made by the European Commission permitting transfers to the UK and that it is ready to begin adequacy assessments. However, the EU’s position is that it cannot start such assessments until the UK is actually a third country. Moreover, adequacy assessments and discussions can take many months even once started. Businesses therefore need to ensure that they have alternative arrangements in place as it is unlikely that the UK will be the subject of an adequacy decision for some time after exit.

The UK government has confirmed that transfers from the UK to the EEA will not be restricted and can continue as usual.

Transfers from the UK to non-EEA countries are likely to be subject to similar rules as those in place at present. The UK will recognise existing EU adequacy decisions and standard contractual clauses so it is unlikely that additional steps need to be taken at present, although businesses should keep this under review.

Whilst international transfers of personal data are the most prominent data protection concern associated with Brexit, Brexit is likely to have an impact on a number of other issues under the GDPR.

Given the extra-territorial effect of the GDPR, many businesses will post-Brexit be subject to both the EU and UK versions of the GDPR. Whilst the requirements in the UK will remain substantially the same, UK government ministers will have powers to amend the UK version of the GDPR to better account for its separation from the EU. Businesses should be aware that discrepancies may arise post-Brexit between their UK and EU data protection obligations, which may both apply in respect of the same processing (for example, where a UK establishment processes personal data about individuals who are in the EEA in relation to offering goods or services to individuals who are in the EEA).

For non-EEA businesses, the territorial scope of the "UK GDPR" will be equivalent to that under the GDPR, that is, it will apply to any controllers and processors outside the UK which offer goods or services to individuals in the UK or monitor the behaviour of UK individuals. 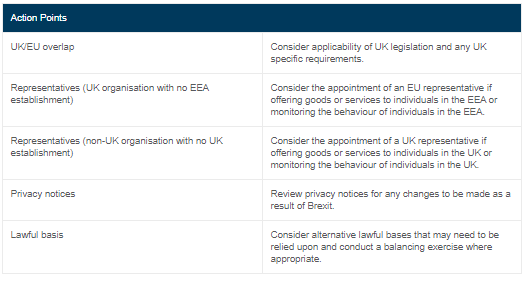