Solicitors’ Hourly Rates for Party and Party Taxations to increase

The Hong Kong Law Society announced to its members today that, with effect from 1 January 2018, Solicitors’ Hourly Rates (SHR) for party and party taxations in civil proceedings will be increased. This is the first increase in over 20 years and long overdue. In practical terms, this means that successful litigants will be able to recover an increased amount of legal costs from the losing party (over 40% more than currently-see tables below). For losing parties in litigation, it will of course mean them paying an increased amount (over 40% more than currently) of the winning party’s costs. The new SHR will apply to work done by solicitors from 1 January 2018 onwards. For work done prior to that date, the existing SHR will continue to apply.

At the end of a civil court case, the court usually awards costs to the successful party. If the parties cannot agree on the amount of those costs, there will be a taxation of costs by a taxing master to determine the amount. Unless the court has ordered taxation on some other basis, costs will be taxed on a “party and party” basis. This means that the costs allowed will be all such costs as were necessary or proper for the attainment of justice or for enforcing or defending the rights of the party whose costs are being taxed.

The current SHR were last revised by the Registrar of the High Court in 1997 and they operate as a guide to the hourly rates of solicitors of different seniority that may be allowed on a party and party taxation (Guide Rates). Although these rates are a guide and masters still retain a discretion as to the hourly rates they allow, they are invariably applied by taxing masters, who only deviate from them in exceptional cases. Since the Guide Rates have not been increased since 1997, the gap between the amount that successful litigants pay to their own solicitors and the amount that they can recover from the losing party on taxation has become wider and wider, meaning that successful litigants are more and more out of pocket.

Given the widening gap between the actual costs charged by a solicitor to his client and the amount of costs that the client can recover when successful in litigation, the Hong Kong Law Society (in 2013) commissioned a review of SHR and its appointed consultant (KPMG) conducted research on the hourly rates actually charged by law firms in Hong Kong. Based on KPMG’s survey results, the Law Society recommended that the Guide Rates be increased on average by 55% to better reflect the normal average hourly rates charged by law firms in the market today and that the rates be adjusted annually in accordance with an inflation linked index. The Law Society also supported KPMG’s recommendation that there be an additional band for solicitors having 15 years post-qualification experience (PQE), in recognition of their seniority, and that the anomaly of there being no rate designated for solicitors of 9 years PQE be rectified.

In response to the Law Society’s recommendations, the Chief Justice appointed a Working Party to review the SHR, which commenced work in 2014 and engaged its own independent consultant to conduct a review of SHR. In conducting its review, the consultant was required to take into account (i) legislation regarding party and party taxation; (ii) the views of major stakeholders, including law firms of different sizes, judges and judicial officers and staff responsible for taxing matters; (iii) relevant experience of other common law jurisdictions; (iv) reports previously submitted by the Law Society to the Judiciary on proposed revisions to the SHR; and (v) changes in legal practices, financial and market conditions since 1997 (including inflation rates), recoverability gap, access to justice, impact on law firms and legal aid and the competitiveness of Hong Kong in dispute resolution.

The Judiciary advised the Law Society on 1 December 2017 that it had concluded its review and would revise the SHR.

Current and New SHR – A Comparison

The tables below show the current SHR and the new SHR that will come into effect on 1 January 2018. 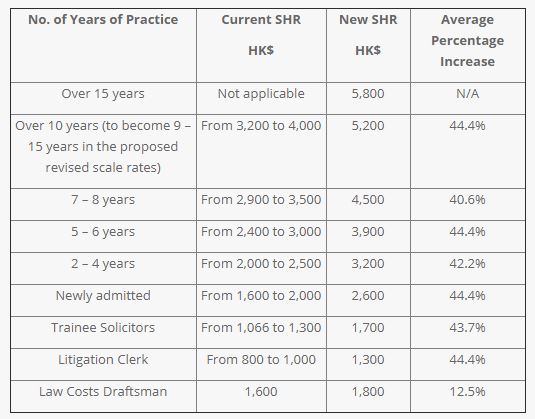 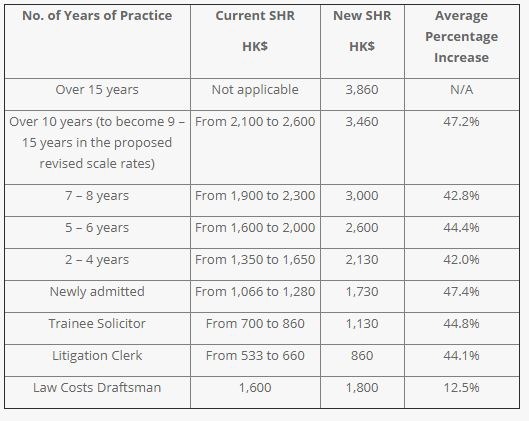 As shown in the above tables, the SHR for solicitors of every level of seniority will increase by over 40% on a party and party taxation and insurers should review their reserves for legal costs for claims, going forward. The increase in SHR will reduce the huge recoverability gap currently faced by successful litigants and reduce the unfairness of them having to pay a large proportion of their legal costs, despite having succeeded in the litigation.