Louboutin given hope in battle of shoes, shapes and soles

What exactly does the notion of “shape” mean? Is this simply the form or outline of something, or are other features, such as colour, relevant?

This was the question answered by the Court of Justice of the European Union (“CJEU”) last week, who were ruling on a long-running trade mark dispute between Louboutin and Van Haren.

The dispute kicked off when Van Haren started selling a pair of shoes featuring a red sole – a design statement widely associated with Louboutin. Keen to protect this element of their brand, Louboutin had previously registered the following trade mark in Benelux, seeking protection for the placement of the colour red on the sole of a shoe (and specifically not the shape of a particular shoe sole). 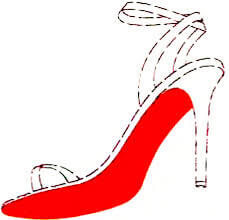 Relying on this registration, Louboutin sued Van Haren for trade mark infringement in the Dutch courts. However, Van Haren counter-challenged Louboutin, arguing that their registration was invalid as the mark consisted exclusively of a shape that gave substantial value to their goods, a ground for refusal or invalidity under the Trade Marks Directive 2008. This essentially means that where a certain shape has been chosen to give some form of value to goods (be this commercial, functional or aesthetic), this should not be granted trade mark protection.

The Dutch courts were unsure whether the notion of “shape” simply covered three-dimensional properties such as contours and measurements, or whether this also extended to non three-dimensional properties such as colour or “position” marks (and so would catch Louboutin’s mark). As such, before determining whether Louboutin’s mark fell within the prohibition, they referred the question to the CJEU for further guidance.

Finally, in their long-awaited decision of 12 June 2018, the CJEU confirmed that the word “shape” should be given its everyday meaning absent anything to the contrary. As such, given Louboutin’s registration simply sought protection for the application of a certain colour to the sole of a shoe, rather than protection for the shape of a particular shoe sole, their mark could not be considered to consist exclusively of a shape that gave substantial value to the goods. The CJEU were also keen to point out that the prohibition could not apply where the main element of a trade mark is a colour recognised under an international ID code – i.e. Louboutin’s iconic red. The CJEU therefore ruled that Louboutin’s mark fell outside the scope of the prohibition and handed the case back down to the Dutch courts to make a final ruling.

The decision is a welcome one for Louboutin, and provides some much-needed clarification on what constitutes a mark consisting exclusively of a shape. However, we may find the position up in the air again soon as a result of new legislation. The new EU Trade Mark Regulation (“EUTMR”), and with the new EU Trade Marks Directive of 2015 which is due to be implemented by Member States by January 2019 (“EUTMD”), amend the wording of the ground for refusal from covering simply shapes, to also cover “any other characteristics” that give substantial value to goods.

Given marks such as the Louboutin mark will presumably fall within the “any other characteristics” wording in the new legislation, it will be necessary for owners of such trade marks to show that the marks themselves do not give substantial value to the goods. Prior to the Court’s ruling, Advocate General Szpunar (opining on this case) had considered that account should not be taken of the reputation of the trade mark or its proprietor as part of the assessment to determine whether the mark at issue ‘gives substantial value to the goods’. Rather the mark should give substantial value to the goods in and of itself to fall foul of the prohibition. The CJEU did not comment on the point in its recent judgment, leaving the possibility open for owners of famous shape or other non-traditional marks to argue that they should not be refused under Article 7(1)(e) EUTMR or Article 4(1)(e) EUTMD, on the basis it is the reputation they have acquired through use, rather than the mark per se, that gives substantial value. Furthermore, there may be possibilities for the owners of such marks to rely on passing-off grounds in the case of look-a-likes.

Time will tell whether such arguments will be upheld. However, for now at least, it’s clear that shape means shape. And red soles? They mean Louboutin.