Developments in 2019 suggest that the regulation of work and the employment relationship will continue to be an area of focus as the Kingdoms of Saudi Arabia and Bahrain move into a new decade and compete regionally and internationally for foreign investment and talent.

As with last year’s review in the December 2018 / January 2019 Law Update article entitled ‘2018 Review: Employers in KSA and Bahrain‘, this article will review the key employment changes that occurred in 2019 in Saudi Arabia and Bahrain.

The beginning of the year saw another increase in the so-called ‘expat fee’ which is payable by employers for their expatriate employees and is collected on the issuance and renewal of work permits. The fee for 2019 was increased to SAR 6,000 for each expat employee where the number of expats did not exceed the number of Saudi employees, and SAR 7,200 where there were more expat employees than Saudi employees. Fees will increase again in January 2020 to SAR 8,400 and SAR 9,600 respectively.

There was no let-up in the government’s Saudisation policy and some interesting changes were introduced during the course of 2019; although these will only take effect in 2020. The ‘Saudisation’ policy, which is currently applied through the Nitaqat program, requires employers in the private sector to employ a minimum number of Saudi nationals. Nitaqat sets quotas for employers based on their size and the economic activity undertaken by them and rates their compliance by placing them in colour coded categories. Employers are placed in the Platinum and Green categories if they are compliant with Nitaqat and are rewarded with various privileges in relation to visas and work permits; whereas employers who fail to meet their quotas are placed in the Yellow and Red categories and are penalised by being denied access to visas, work permits and the Ministry of Labour and Social Development’s (‘MLSD’) services.

The affected roles are: Dentist Consultant, General Dentist Consultant, General Dentist Physician, Dentist, Oral and Maxillofacial Surgery Consultant, Oral and Maxillofacial Surgeon, Orthodontist as well as all professions that are included in the field of dentistry. Resolution No. (61842) does not apply to establishments where there are less than three dentists. The penalties for non-compliance are a suspension of the services of the MLSD, which include issuing visas, transferring sponsorship and applying for a change of profession for expatriates. This is in addition to the penalty fine for not complying with Saudisation.

The next significant change has been the issuance of Ministerial Resolution No. (63717) dated 29/03/1441H (corresponding to 27.11.2019G) which will abolish the Yellow Category in Nitaqat. Resolution No. (63717), which comes into effect on 01/06/1441H (c.26.1.2020G), represents a significant change to Nitaqat by removing the Yellow category with the aim of further pressuring employers to meet their Saudisation quotas and generally increasing employment opportunities for Saudi nationals. As a consequence of the change, all employers currently in the Yellow category will automatically transfer to the Red category. This will mean that they will become subject to the following penalties as a result of being a Red category employer and will be prohibited from:

Yellow category employers are already restricted from applying for new visas and permits and renewing existing ones. They are also prevented from changing job roles specified in work permits and having expats transfer to them from another employer in Saudi Arabia. The impact of being a Red Category employer will be that they will not be able to renew the work permits of all of their expatriate employees (currently they are only prevented from renewing the work permits of employees who have been in Saudi Arabia for two or more years), and will not be able to employ any expatriates in a new branch with the labour office to register as an employer.

In April 2016, the MLSD introduced the standard form employment contract which contained mandatory terms and conditions that all employers are required to adopt. To ensure that employers continue to adhere to the minimum requirements of the Labour Law issued by Royal Decree No. M/51 dated 23 Sha’ban 1426 (the ‘Labour Law’) by issuing a written employment contract that incorporates the minimum statutory entitlements for employees, Ministerial Resolution No. (156309) dated 18.8.1440H (corresponding to 23.4.2019G) was passed earlier in 2019 requiring employers to ‘authenticate’ employment contracts by uploading them to the web portal of the General Organisation for Social Insurance (‘GOSI’). Employers were required to authenticate contracts for all new hires immediately following the issuance of Resolution No. (156309). Contracts for existing employers are required to be authenticated in the following phases: 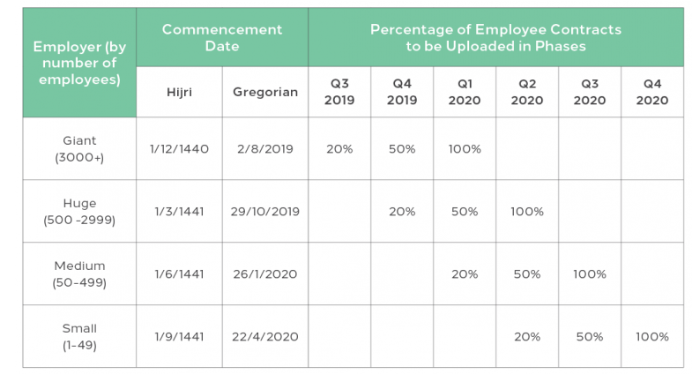 The penalty for non-compliance is that employees who have not had their contracts authenticated by the required period will be permitted to leave and work for another employer.

Changes to the Labour Law

A number of minor changes were made to the Labour Law by Royal Decree No. (684) dated 27.11.1440H (corresponding to 30.7.2019G). The definition of worker in Article 2 was changed slightly to make it explicit that it includes both men and women. Article 3 was amended to make it unlawful to discriminate against citizens in the advertisement, recruitment and performance of their work on grounds of sex, disability, age or any other form of discrimination. The retirement age in the Labour Law was aligned with the Social Insurance Law issued by Royal Decree No. M/22 dated 15.11.1969. Articles 155 and 156 of the Labour Law, which makes it unlawful for a female employee to be issued with a notice of termination or to be dismissed during maternity leave or a period of illness resulting from pregnancy or delivery, were amended with the latter being repealed and consolidated into Article 155. The new Article 155 prohibits employers from issuing a notice of termination or dismissing an employee who is pregnant or on maternity leave or for the duration of her illness resulting from pregnancy, provided that in the case of the latter the employee’s illness is certified and her absence (whether cumulative or in aggregate terms) does not exceed 180 days per annum.

Protection against Behavioural Abuse in the Workplace

Following the enactment of the Anti-Harassment Law by Decision 488 dated 14.9.1439H (the ‘Anti-Harassment Law’) in 2018, Resolution No. (20912) dated 2 Safar 1441 (corresponding to 1.10.2019G) was passed which sets out procedures and requirements that employers must comply with in order to safeguard the privacy, dignity and personal freedom of the individual and protect against behavioural abuse.

Resolution No. (20912) came into effect on 20 October 2019 and is wide in scope in that it defines ‘behavioural abuse’ as all acts of abuse by one party against another, including all forms of exploitation, threats, harassment, extortion, inducement, quarrel, insult, offence, or deliberate seclusion with the opposite sex, as well as any form of discrimination. Behavioural abuse can occur physically, verbally or by electronic means and can take place outside of working hours or the workplace. Further, it covers acts which may intend, lead or potentially lead to physical, psychological, sexual or economic harm to the other party.

Resolution No. (20912) prescribes a number of measures that must be taken by employers to protect employees from behavioural abuse. These include:

In May 2019 the government finally made good on its promise to make available a work permit that dispenses with the need for a sponsor by issuing Royal Decree No. M/106 dated 10.9.1440H to enact the ‘Privileged Iqama Law’. The Privileged Iqama is available to non-Saudi nationals either on a permanent basis or for a one-year renewable term. It allows the holder to work in any private establishment and change employers without restriction; except for roles that are reserved exclusively for Saudi nationals. The holder is also allowed to carry out commercial activities permitted by the Foreign Investment Law issued by Royal Decree No. M/1 (the ‘Foreign Investment Law’), to own and use real estate in all towns and cities (except the holy cities of Mecca and Madinah) for residential, commercial and industrial purposes, and to use real estate in Mecca and Madinah for a period not exceeding 99 years.

There are also personal benefits for the holder and his/her family. The holder’s family is permitted to stay with him/her in the Kingdom, and the holder can obtain visit visas for relatives and recruit domestic workers. Additionally, the holder can own private transport. Further, the holder can exit and enter the Kingdom freely without the need for a visa and use the passport desks designated for Saudi citizens in the airports.

The conditions for obtaining the Privileged Iqama are not dissimilar to that for the ordinary Iqama in that the applicant must have a valid passport, provide a police clearance certificate, pass a medical check and must not be less than 21 years old. Additionally, the applicant is required to pay a fee and have health insurance cover.

Rules on the Employment of Women

Women in employment continued to be an area of focus for the government in 2019 with the issue of Ministerial Resolution No. (39860) of 1440H which set out a number of rules. Key amongst these are:

Bahrainisation of the health sector

In March 2019, the government passed Law No. (1) of 2019 dated 5.3.2019 which amended Article 14 of Law No. (21) of 2015 Concerning Private Health Institutions to make the employment of physicians, paraprofessionals and nurses in private health institutions a priority for Bahraini nationals, with the exception of roles that require a special expertise that is rare and unavailable. The prioritisation of roles for Bahraini nationals became obligatory on the expiration of contracts with expatriate workers.

Resolution No.2 of 2019 was passed to amend some provisions of Resolution No.76 of 2008 so that employers seeking a work permit for a foreign worker should not have abused their employees or failed to fulfil their rights, including failing to pay wages. Also, employers were required to register and update their employees’ data with the Labour Market Regulatory Authority on a regular basis. Finally, (and even though it is yet to be implemented) employers were required to pay wages in accordance with the wage protection system (see further below).

The fee imposed on foreign employers for issuing or renewing a permit to practice a professional activity was increased to 500 Bahraini Dinars by Resolution No.3 of 2019 amending Resolution No. 31 of 2014 regarding fees imposed by the Labour Market Regulatory Authority.

The implementation of the wage protection system had been the subject of much discussion in recent years and it was not surprising that Resolution No.68 of 2019 on the Wage Protection System was passed in 2019. Resolution No.68 obliges employers to pay wages in accordance with the wage protection system through any payment methods of providers authorised by the Central Bank of Bahrain. These authorised providers are required to disclose to the Labour Market Regulatory Authority immediately after the deposit of wages certain information that includes the employee’s name, wage amount, date of payment, and the employee and employer’s account numbers. Resolution No.68 of 2019 is to be implemented in stages by a separate Resolution which is still awaited.

Finally, Resolution No. 84 of 2019 was issued by the Minister of Labour and Social Development prohibiting the employment of pregnant women in a number of hazardous conditions, including exposure to extreme heat, continuous physical exertion, harmful vibrations, exposure to radiation, bacterial infection and certain hazardous materials. It also obliges employers to take necessary measures to protect the health of pregnant women and the foetus where there may be a danger to them as a result of the work performed by the employee.