With COVID-19 causing ever increasing financial uncertainty around the globe, we thought it an apt time to provide you with a summary of the various corporate insolvency procedures in the UK applicable to companies facing financial difficulties. Taking each in turn, we will discuss administration, administrative receivership, company voluntary arrangements, schemes of arrangement and liquidation. We will also touch briefly on directors’ duties, rules relating to asset distribution on insolvency and transactions that may be set aside on insolvency or ‘reviewable’ transactions.

This know-how summary also follows in the wake of announcements made by the Department for Business, Energy & Industrial Strategy on 28 March 2020 which aim to help companies undergoing a rescue or restructure process to continue trading and avoid insolvency. In brief, the UK Business Secretary has announced:

For those terms highlighted in green, please see our ‘breaking down the jargon’ glossary which follows the main text.

Administration is a form of rescue procedure used to reorganise companies or realise their assets. The majority of the time, administration is used for insolvent companies but it may also sometimes be used for solvent entities. A company may enter into administration by way of an application to court by the company, its directors or creditors and a subsequent hearing in court (the court route) or by way of filing certain documents at court by the company or its directors or a qualifying floating charge holder (the out of court route).

However, pre-packs have invariably been criticised as they allow the administrator to agree a sale of the business without first agreeing the approach with creditors and the court. In addition, the speed at which pre-packs occur may mean a lower market value is achieved for the business or its assets than may otherwise have been possible, meaning a reduced return for creditors. 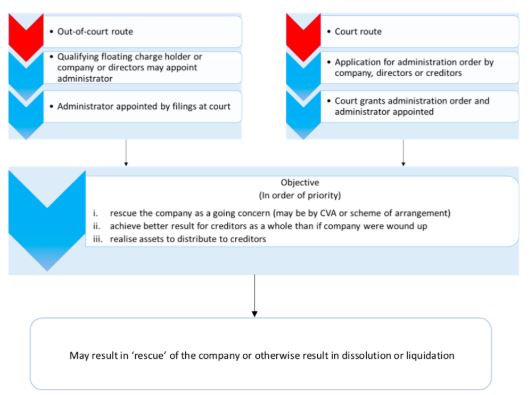 If one of these limited exceptions apply, following a default under the relevant loan agreement, an AR may be appointed by a secured creditor. The AR must be an insolvency practitioner and, once the floating charge has crystallised, the AR is given extensive authority to take control of the charged assets and the run the company’s business, owing its duties to the relevant secured creditor. An AR may not be appointed if the company is subject to administration proceedings.

Administrative Receivership ends when the relevant secured creditor has been paid in full or the company no longer has any assets to be sold.

Administrative Receivership is to be distinguished from ‘LPA or fixed charged receivership’ which is used to describe the process by which a receiver is appointed by a secured creditor (holding a fixed charge) to protect its interests through management of the assets secured. The power to appoint a receiver in this instance is usually permitted following a default under the relevant loan agreement and is typically conferred on the secured creditor by a security document though there are also statutory rights to appoint a receiver contained in the Law of Property Act 1925.

In both administrative receivership and receivership, receivers owe their primary duty to the appointor rather than any other creditors, there is no moratorium available and the procedures are usually comparatively cheaper than administration. 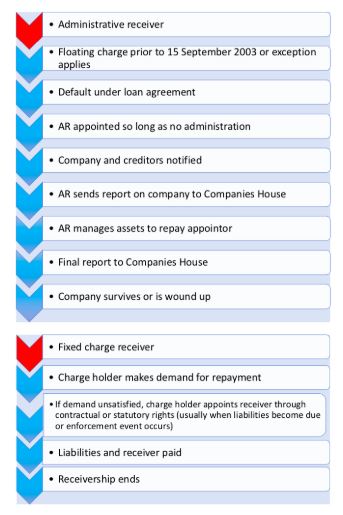 A company voluntary arrangement is a process which involves an agreement or ‘compromise’ between a company and its creditors under Part I of the IA 1986 which aims to avoid terminal insolvency proceedings. To commence a CVA, the directors of a company will draft proposals to address a company’s financial difficulties and submit these, together with a statement of the company’s affairs to an insolvency practitioner who will act as a ‘nominee’ to assist with assessing the proposals and deciding whether to proceed with the same. Alternatively, if the company is already in administration or liquidation, it would be the administrator or liquidator who would submit proposals for a CVA (section 1(3), IA 1986).

Other than in cases of administration and liquidation, the nominee must submit a report to court within 28 days of being given notice of the proposals setting out whether the proposals should be submitted to the creditors and members of the company. In cases of administration or liquidation, the initial report to court is not required. Small companies who meet at least two of the criteria set out in section 382(3) of the CA 2006 may benefit from an optional 28 moratorium at the point the nominee is appointed.

If the nominee recommends proceeding with the CVA, the proposals will be implemented if approval from at least 75% by value of creditors of the company (excluding secured creditors) is obtained following a statutory decision procedure, unless 50% by value of all creditors whose claims are admitted for voting, vote against the proposals (rule 15.34, IR 2016). The nominee must also call a members’ meeting which must take place following the creditor’s decision within 5 business days (rule 2.28, IR 2016) and obtain a simple majority in value to approve the proposals. The insolvency practitioner in its capacity as nominee reports to court on the creditor approval and if such approval is not challenged (which may be on grounds of unfair prejudice or material irregularity), the nominee’s role transitions to a ‘supervisor’ role in order to implement the proposals.

An approved CVA will bind all creditors entitled to vote, whether or not they had notice of such entitlement (section 5(2)(b), IA 1986). Following completion of a CVA, the insolvency practitioner as supervisor submits a report within 28 days to shareholders and creditors.

Unless with express consent, a CVA will not affect the rights of secured creditors to enforce their security. 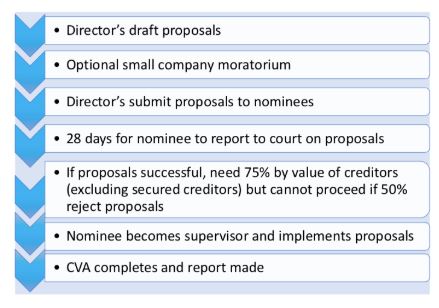 A scheme of arrangement is an arrangement or ‘compromise’ proposed by a company, creditor, member, liquidator or administrator under Part 26 of the CA 2006. Schemes of arrangement may be put in place by solvent or insolvent companies and are between the company and its members and/or creditors and aim to repay the company’s indebtedness in whole or in part over an agreed timeline.

The process involves an application being made to court following which the court decides whether to call meetings of the relevant classes of creditors (section 896(1), CA 2006). Notice of such meetings includes details of the proposed scheme and an explanatory statement. At the meetings, the scheme must attain agreement from a majority in number and at least 75% in value of creditors or members or each class of them. Unaffected creditors will not be asked to vote. If approved, the court will then decide whether or not to sanction the scheme (section 899(1), CA 2006), making its decision based on whether certain criteria have been satisfied such as whether statutory procedures have been complied with, whether classes of creditors have been fairly represented by those attending the meetings and whether the scheme meets a reasonableness test.

Summary of scheme of arrangement process

Liquidation may alternatively be referred to as ‘winding up’ and is a process which involves realising the assets of a company and distribution to creditors, finishing with legally ‘ending’ a company. A company may be liquidated or ‘wound up’ through compulsory liquidation or voluntary liquidation which often follows an administration. The procedure is overseen by a liquidator who is the official receiver or an insolvency practitioner.

Compulsory liquidation begins with a winding-up petition being submitted to court by the company, its directors, any creditor or creditors, contributory or by a liquidator on one of the seven grounds set out in section 122(a) of the IA 1986. A winding up order will be made by the court if it deems that one of the circumstances set out in section 122 of the IA 1986 applies, most commonly, that a company is unable to pay its debts. Once a winding up order is made, the official receiver becomes the liquidator of the company until or unless any other person is appointed liquidator. The functions of the liquidator in relation to the company being wound up are to report to the company’s creditors and ensure the assets of the company are got in, realised and distributed to the company’s creditors and, if there is any surplus, to the persons entitled to such surplus (section 143(1), IA 1986). The liquidator will distribute funds in accordance with the statutory order of priorities (see section 2 below). Final accounts are sent to creditors (section 146, IA 1986) and if there is no objection, the company is liquidated and dissolved three months later.

Alternatively, companies may go into voluntarily liquidation by way of a members’ voluntary liquidation (‘MVL’) or a creditors’ voluntary liquidation (‘CVL’). In order to implement an MVL, the directors of a company must swear a statutory declaration of solvency (section 89, IA 1986) and in both an MVL and CVL, the members must pass a special resolution which sets out that the company should be wound up in order to commence the relevant proceedings (section 84, IA 1986 and section 283, CA 2006). Both MVLs and CVLs will commence on the date the special resolution is passed following which a liquidator will be appointed to collect in and realise the company’s assets. At the end of the liquidation, the company is dissolved. In a CVL, creditors are involved in the appointment of a liquidator and have certain entitlements.

A liquidated company will be removed or ‘struck off’ the UK Companies House register which will mean it ceases to exist. A director of a company that has gone into insolvent liquidation will be prevented from forming a business or company with the same or similar name as the liquidated company for a period of 5 years (subject to certain exceptions). 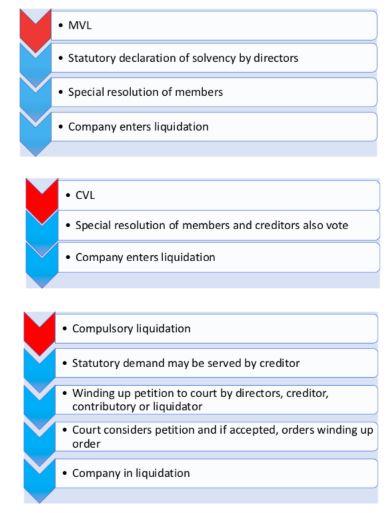 In administration or liquidation proceedings, the proceeds of realisations of a company’s assets will be distributed in the following statutory order of priority in accordance with the IA 1986 and the IR 2016:

If in the course of the winding up of a company, it appears that a director or officer of the company has misapplied or retained or become accountable for any money or other property of the company or been guilty of any misfeasance or breach of fiduciary duty in relation to the company, the court may compel such person to repay, restore or account for the money or property or any part of it, with interest at such rate as the court deems appropriate or to contribute such sum to the company’s assets by way of compensation (section 212, IA 1986). Such actions may be by way of:

Certain transactions which a company has been a party to may be reviewed or ‘challenged’ if the company is subject to insolvency proceedings. Such transactions may be referred to interchangeably as ‘reviewable’ or ‘antecedent’ transactions and may be disputed by administrators, liquidators or in some cases, creditors. Reviewable transactions include:

Breaking down the jargon… 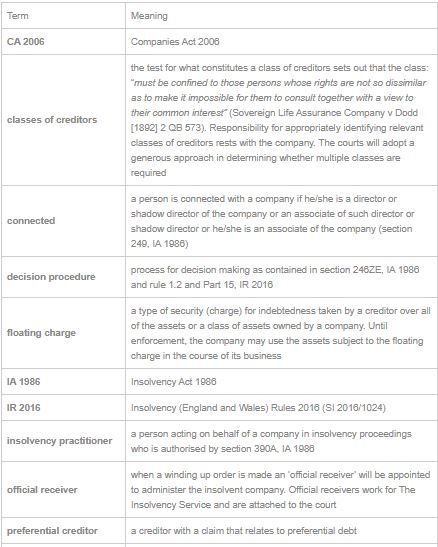 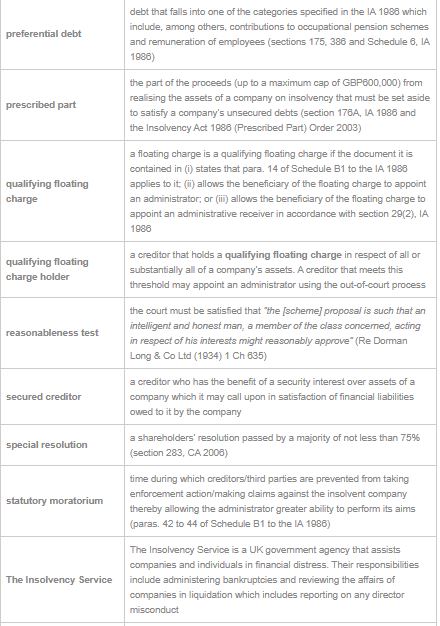