Historically, Wall Street banks were rarely the focus of government antitrust investigations or private antitrust litigation. But that changed in the wake of the Great Recession. While most observers believed that antitrust scrutiny of the financial services sector was reaching its end, recent lawsuits filed by the private antitrust bar—which has secured hundreds of millions in settlements in the last few years—strongly suggest otherwise. It appears that banks will continue to have to defend themselves in costly antitrust litigation for the foreseeable future, regardless of whether the Trump administration makes antitrust enforcement in the financial services sector a priority.

In the years following the 2008 economic crisis, government antitrust agencies in the U.S. and Europe ramped up their scrutiny of the financial services sector. In particular, there were lengthy investigations into whether a number of banks manipulated foreign exchange markets and the benchmark rates (such as LIBOR and EURIBOR) for various types of financial instruments. These investigations resulted in a number of large banks and their employees pleading guilty to criminal charges and agreeing to pay billions in fines.

As soon as these government investigations became public, the private antitrust bar filed a number of lawsuits alleging billions in damages. “Those and other government investigations resulted in a steady stream of private antitrust lawsuits alleging that banks unlawfully colluded to manipulate LIBOR and other benchmarks, fix the prices of various commodities, set ATM fees, and so forth,” says Juan Arteaga, a partner in Crowell & Moring’s Antitrust Group and a former deputy assistant attorney general in the Antitrust Division of the U.S. Department of Justice.

By early 2017, however, many in the legal and financial services industries believed that the spike in antitrust litigation was starting to run its course. Cases were being settled and a new administration in Washington was signaling a pullback in regulatory enforcement. But that optimism now appears to be premature, and private antitrust litigation is still very much part of the landscape for the financial services sector—but with a new twist.

A number of cases filed within the last year show that plaintiffs’ lawyers are no longer waiting for the announcement of a government investigation before filing antitrust lawsuits against banks. “They are starting to file on their own, thereby ensuring that litigation will continue even if there is less enforcement by federal antitrust authorities,” says Arteaga.

At the same time, plaintiffs are expanding their toolkit of legal theories. For years, private antitrust litigation focused largely on the alleged collusion among banks to manipulate various types of markets, as plaintiffs followed the lead of government enforcement efforts. More recent lawsuits, however, have shifted their focus to potentially anticompetitive conduct premised on group boycott and abuse of market power theories.

Arteaga cites a recent example in which six of the largest banks in the world formed a joint venture to facilitate the lending and borrowing of stock in support of short selling. In August 2017, several public pension funds sued those banks, alleging that they had collectively blocked other companies that had tried to enter this market with more efficient and lower-cost platforms and services. 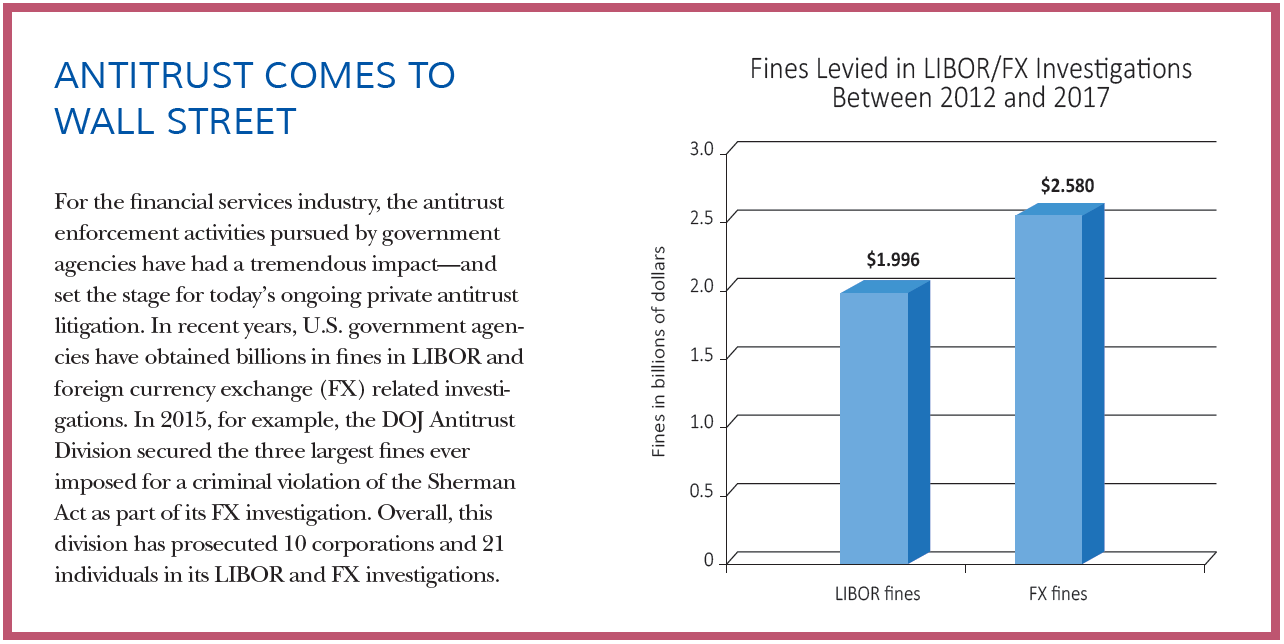 “The complaint asserts that the banks illegally colluded with each other and agreed that they were going to boycott, as a group, these other companies in order to drive them out of business and protect the fees that they were getting from these transactions,” says Arteaga.

Large banks are dealing with other, similar cases. In June 2017, for example, a small trading exchange filed an antitrust suit that accused a dozen banks of conspiring to keep it out of the credit default swap market through a coordinated boycott of its trading platform. And, in a case currently working its way through the judicial system, investors are suing a number of large banks for allegedly working together to keep business away from three electronic exchanges set up to handle interest rate swaps.

Overall, says Arteaga, “any hope that reduced government antitrust enforcement in the financial services sector under a Trump administration would result in less private litigation is being dampened by the filing of these recent lawsuits. They indicate that antitrust litigation is going to continue to be a live issue for large banks. Looking ahead, banks need to think of this as their new normal.” In that environment, he adds, it is all the more important for financial institutions to implement robust antitrust compliance programs and consult with antitrust counsel before participating in any competitor collaborations.

To gauge the future level of litigation risk, banks can keep an eye on a number of private suits, including the financial benchmark litigations that began a while ago and may be resolved in the near future. “See how those play out,” Arteaga says. “If banks are still paying millions of dollars in settlements, that’s going to incentivize the private plaintiffs’ bar to continue to go after these institutions in new and creative ways.